Home All Aboard – Long Island Sound to the Penobscot Bay

All Aboard – Long Island Sound to the Penobscot Bay 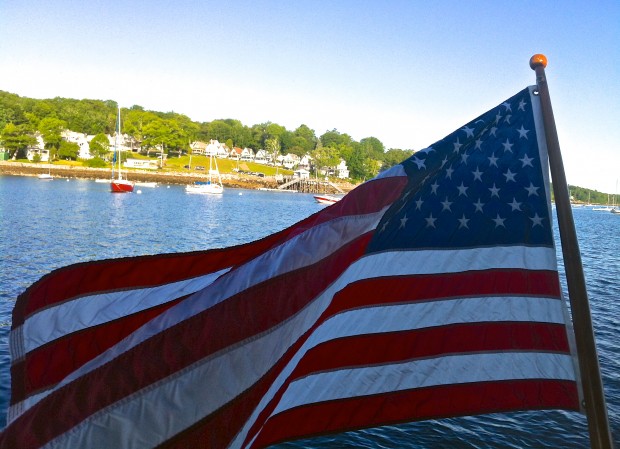 It’s so good to be back together.  Whether on the Exuma Sound, Mississippi River, Lake Huron, Gulf of Mexico or Long Island Sound, life on the good ship Muddy Waters has a comfort, familiarity and rhythm we all enjoy.  Aboard as a family in Westport, Connecticut we next set-out for Mystic.  We anchored between two small islands just in time for a band of wind and rain that burst from the sky with gusts to 35 knots.  A real summer squall.  We felt safe inside our trawler and comforted our anchor was dug-in just a little deeper by the force of the wind on the hull and superstructure. 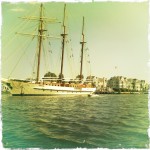 Next morning, with Muddy sparkling from the free car wash, we lowered our dinghy and ran into town.  Walking the scenic streets, we found ourselves spending an hour or so in a family-owned bookshop, chatting with a local author about his recently published mystery, and picking up a half-dozen books to bring back aboard Muddy Waters.  Visiting bookstores and chatting up locals was a constant for us last year on the Great Loop and it felt good to be back at it.

We then took our dinghy farther up the Mystic River to the Mystic Seaport Museum, a 40-acre site that’s part museum and part working preservation shipyard, all modeled on an 19th century coastal shipping town.  Sort of a sea-side Williamsburg.  Here’s a short video on the Seaport.  With craftsmen on site, we got glimpses of rope-making, blacksmithing and ship-building.  Such a great way to learn. 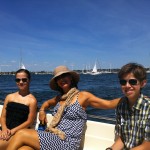 Next morning we sailed into Newport, Rhode Island.  Newport is like South Beach crossed with Annapolis.  A fast-paced, fancy pants, well-to-do crowd who know their way around boats, big and small, modern and classic.  Newport was hosting the America’s Cup World Series races, and the area was brimming with even more summer sailing activity than usual.  The harbor entrance was full of criss-crossing sailboats of all types, and we were lucky to make our way in safely between spectacular classic cruisers, mega-yachts and America’s Cup racers.

We spent the first night on a mooring in the harbor and took a water taxi into town to explore and mingle among the yachtie crowd.  Second day we squeezed into Bannister’s Wharf Marina in the heart of town because we needed to replace our refrigerator, which had gone kaput.  I mean we really squeezed in, with only a pinched fender separating us from a beautiful 43 foot yawl next door.  The neighboring captain and crew were kind and helpful and the space put this captain’s tight quarters parking skills to the test. 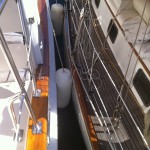 We explored historic Newport on foot, jogged to the cliffs on the Atlantic side of town and picked-up some interesting history on the smallest state in the union.  We learned, for example, that while Rhode Island welcomed Jews fleeing the Inquisition in Spain and Portugal, this was also New England’s slave trading center during America’s colonial era.  Complicated and contradictory history, like most places we learned about last year on our watery travels with Keenan and Daria.

Leaving the yachting crowd behind, we traveled next toward the Cape Cod Canal, anchoring out near Onset Beach before yet another New England summer storm walloped us.  We were especially happy to have our 75 lbs. Bruce anchor and 3/8 all-chain rode deployed that evening. 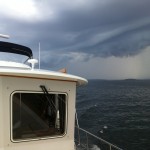 Having traveled aboard Muddy Waters through various man-made canals – including the Erie Canal last year – we enjoyed learning about the engineering efforts behind the Cape Cod Canal (completed in the early 1900’s), which saves commercial vessels more than 60 miles in the transit between New York and Boston.  Next morning we waited for a flood (rising) tide to carry us through the Canal – since the current can run at about six knots, slow boats like ours need to play the tides or else plan to crawl the canal at just a knot or two.

Clear of the canal, we steamed across a mostly mild Cape Cod Bay, past Boston Harbor and Marblehead and into the lovely town of Salem, Massachusetts.  We spent the next two days tied-up at Pickering Wharf just across from the replica tall-ship Friendship of Salem.  While there, we welcomed aboard our friends Colin and Rachel and their two children and they in turn welcomed us to their stomping grounds.  We learned lots about the area from them, met their sailboat partners the Coopers, and had a grand ol’ time visiting, breakfasting, jogging, and just generally catching-up.

We also tended to a few maintenance items, one of which was extracting a giant salad worth of seaweed from our generator intake, sea-cock, hose and strainer.  After two hours of hard labor in the engine room, Keenan was able to muscle the hose off the fitting and then pull out the slimy and gelatinous green stuff.  Problem solved.  For the time being… 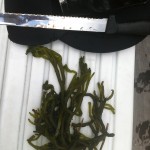 With a favorable weather window in the forecast, we set-off at 0500 for Maine and arrived at Harpswell in Casco Bay and dropped the hook exactly twelve hours after departing Salem.  A long day on the water, much of it spent about 15 miles offshore the coast of New Hampshire.  Locals call the islands of Casco Bay the Calendar Islands because it seems there’s an island for just about every day of the year.

In the 100+ plus islands in the area, we ended up anchored next to family friends from Bayside, Maine – Dave and Gail Witherill.  Though they sail this area regularly, they’d never anchored in this protected spot, and we’d certainly never been in these parts aboard Muddy Waters – and here we ended up next to one another off Harpswell, one of the Calendar Islands.  Small world (80% of which is covered in water), fate, sailor’s luck or a little of each.  The Witherills rowed over in their dinghy from their lovely 34-foot sailboat to say hello and we welcomed them onboard Muddy Waters and chatted about Bayside and then about our experience in the Bahamas and their plans to sail down there this winter. 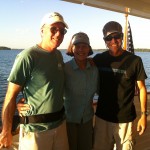 Dave spent the past 20+ years as a captain for ExxonMobil, regularly crossing the Atlantic and Pacific Oceans, and retiring after 30+ years total of service.  He knows the sea.  But, being a Mainer through and through, he’d be the last person to tell you about his impressive seafaring background.  Dave’s also a graduate of the Maine Maritime Academy on the Penobscot Bay.  Oh, and by the way, we learned from another Maine friend that Dave was the captain Exxon flew to Alaska to pull the Exxon Valdez off of the reef in Prince William Sound…  Jennifer and I had a good laugh when talking about our paltry thousands of miles of cruising – just a good round-trip or so for Dave as captain of some of the world’s largest ships!

The following morning we weighed anchor, weaved our way through the plentiful lobster pots that dot the coast, the channel, the open water – well, everywhere really – and made our way in fine weather into Boothbay Harbor, hoping to anchor out again for the evening.  With no nearby anchorages and all the mooring balls taken, we tied up for the evening at one of the local marinas nestled in the heart of this picturesque Maine coastal village.  We explored the town, talked at length to a few local shopkeepers and tucked-in for the evening.  The following morning Jennifer and I went for a long run along the coast and through the woods.  We left the kids $10 so they could go into town for breakfast on their own.  We only learned a few days later they’d gone to a coffee shop and had waffles…with ice cream.  Probably not the breakfast of champions, but we’re always pleased when they work as a team! 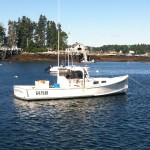 Later in the morning we departed for Rockland and were run down by a ferocious summer thunderstorm.   The blue sky turned to grey in a flash.  Then it went a sort of purple.  The storm was moving at double our speed of about 7 knots, chasing us down.  (Sailors believe storms have human characteristics and intentions.)  When it finally caught us, everything went white.  The storm had thrown a blanket over Muddy Waters to confuse us.  We could barely see the lobster pots that dot the entire Maine coast and our path for the day.  Fortunately, the position of the pilothouse in a Krogen trawler  gives excellent visibility forward.  With Keenan and Daria as spotters, we were able to maintain near cruising speed and make our way through the maze of colorful trap markers.  We made it through that storm and were reminded that a sea-worthy vessel and helpful crew are musts when the skies get angry.

As the storm galloped past us looking for other prey farther north and east, we turned the corner into Rockland Harbor and tied up at Landings Marina for the evening.  We were welcomed in town by the entire Samway, Bast, Miska clan who traveled from Bayside, about an hour north, to greet us.  What lucky sailors we are.  They’d last seen Muddy Waters (and the captain) some 2,000 miles earlier and came to offer us hugs, kisses and high fives.  After more hugs and then some stories about our past few weeks together aboard Muddy Waters, we had a family dinner in town, all twenty of us – Oma and Pappy’s treat. 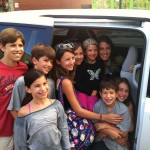 Thank you!  Then with all the grandkids kids in tow – plus the wonder puppy Romeo – my brother, Uncle Chris, bought everyone ice cream.  We laughed, patted our full bellies, gave thanks for all our good fortune to be together, and began plotting for the next few weeks – hikes, bonfires, talent shows, lobster rolls, sailing, wharf-jumping, music, exploring.  Just another Samway (summer family reunion) Adventure.