Home Anchoring in the Everglades

Anchoring in the Everglades 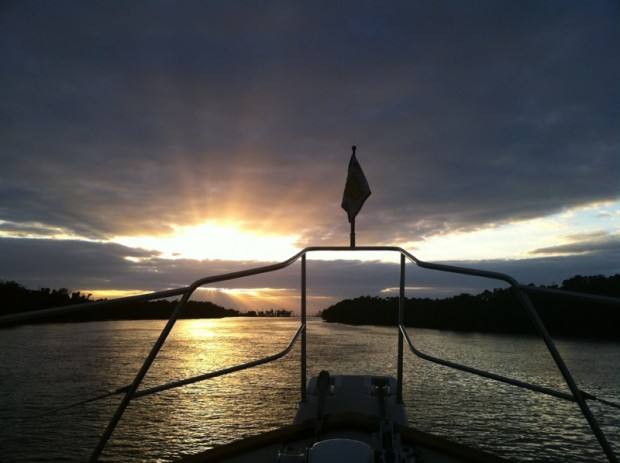 Here we are anchored out in a wide section of Little Shark River in Everglades National Park. With the tide flooding, we’re pointed west as the sun sets. We enjoyed the undisturbed surroundings and know we’ll return here by water again soon.

Jennifer squeezed in a last training run in Naples, enjoying a white-sand sunrise as she prepares for her team running race from Miami to Key West and then her week-long adventure race in Costa Rica. By 0930 we pushed off, learning a few more tricks from Dennis about ways to shove off a dock given certain wind and tide conditions. We had a smooth ride through most the day, then the wind picked up to near 20 knots and the ride got bumpy.

Muddy Waters took a full salt-water bath, and we had the windshield wipers on non-stop the last two hours of the ride thanks to the shallow water on the Gulf coast and the short steep waves generated by the strong winds. The crew barely noticed the weather until they’d come up to the pilothouse and see the spray on the windshields. Thanks to a fine design and high bow, we rarely get spray up that way; but quartering seas in 20 knots of wind with depths averaging under ten feet will get the biggest of boats wet like a baby in a tub.

The other benefit of the position of our pilothouse is the excellent visibility forward. Making for the Ponce de Leon Bay and then into an anchorage in Little Shark River, we dodged hundreds of crab trap buoys. Phew, another day without having to don a wetsuit with a serrated knife between my teeth. Once in the river, the water went flat and we steamed quietly past two boats at anchor in the little bay created by the river’s final bend. We worked our way about a half-mile farther up the river and dropped the hook in twelve feet of water. One of our favorite places on earth – Everglades National Park and what Marjory Stoneman Douglas called the river of grass.

My dad’s father used to call me Everglades Mike whenever he and my grandmother would come to Miami from Maine to visit. As kids ourselves, and then with our own kids, we’d travel to Shark Valley with bikes in tow and ride the beautiful 15-mile loop (a Great Loop in its own right) in the winter. We especially enjoyed watching the alligators sun themselves on the trail as we slalomed through on our bikes. We took airboat rides through the area too, even saw alligator wrestling a couple times.

I have a badly busted up finger on my right hand (from a childhood accident with a fan blade, made worse by a baseball injury), and I used to think I had it pretty good when I’d see the alligator wrestlers show off their four or five remaining fingers. In years past, Jennifer and I also brought our tents – and the kids – farther south to Flamingo campgrounds, which sadly was partially destroyed by Hurricane Katrina. About five year ago I even spent a few days aboard a canoe convoy in the Ten Thousand Islands National Wildlife Refuge with a dozen other local Miami citizens.

Muddy Waters and crew felt right at home in the Everglades and as soon as we stopped the engine, we could hear the sounds of nature’s surrounding city. Dolphins, fish, thousands of birds, turtles, manatees. Keenan and Daria even saw the reflective eyes of alligators at night when we stepped on deck with our spotlight to scan the shoreline. We watched the light quickly fade and the sky put on a spectacular show of abstract and moving red hues.

We slept peacefully, like tiny visitors in a forest of creatures awake and busy all night. The tide gently swung us around by morning and we awoke to an equally busy scene of birds fishing and turtles finding perches to sun themselves later in the morning. We lifted the anchor with no fanfare, just a few curious birds wondering why we’d leave this quiet paradise. We promised ourselves, again, we’d return here in Muddy Waters and explore more of the Everglades, a natural and national treasure so close to home.