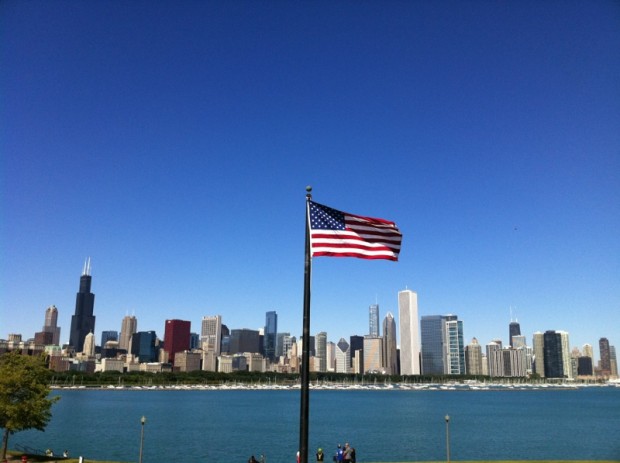 One of America’s great cities, Chicago has a stunning skyline and was a welcome site for the entire Muddy Waters crew after a roly-poly, wavy-gravy ride across Lake Michigan.

Daria was up at 0430, in a 35-degree chill, and decked-out in her finest foulies, including wool cap, work gloves, PJ bottoms and my size 12 Crocs. Oh and a huge smile. Like mama like daughter. Daria told Keenan she’d let him sleep in this round since he got up at 0-dark hundred on our previous pre-dawn departure. Jennifer and I did all our checks, warmed up the CAT, and Daria untied all Muddy’s lines in the agreed order, and we set off for the Saugatuck channel on the way back to Lake Michigan.

Since Daria handled the cold lines, Jennifer volunteered to stand on deck with our spot light to help pick-out the channel markers in the winding two-miles we had before returning to the big water. It was right cold out there and Jennifer was bundled-up in wool like from her days of living and working in the high plains regions outside of La Paz, Bolivia. (Shhh, I was toasty inside Muddy Waters’ wheelhouse. Don’t tell.)

The National Weather Service forecast winds from the east at 5 – 10 knots and seas of less than one foot. You know where this is going. We couldn’t see anything save for the blips on our radar; but our first clue to the non-virtual weather was the chomping mouth of the inlet. Since we were departing from the east and in the lee of Michigan itself, we didn’t expect waves so soon. Hmmm. An hour into our journey and our anemometer had been reading about 18 knots steady from the south.

Seas weren’t really building, they seemed steady at about five feet; but they were right on the beam. Thank goodness yet again for our stabilizer fins and our 50-ton ocean-going boat. And kudos to those hardy sailors who ply these waters up through the fall. Long story short, we cruised for eleven straight hours to Chicago with waves on the beam the entire way. The crew wasn’t sick, just tuckered out. It’s the kind of sea-tired where you can’t sleep, eat, read or do much of anything except sit and wish the other side were closer. The crew just sort of lingered below decks for the day, catching the horizon when necessary.

While watching our radar and AIS carefully and keeping an eye on our Simrad auto-pilot heading, I was able to read nearly an entire book (probably thanks to a steady supply of candied ginger I chewed in bulk). The book – Laura Hillenbrand’s Unbroken about Louis Zamperi – rivals any survival story I know and includes plenty of misery at sea in one section. Puts our little sojourn, and much else in life, in perspective.

At about half-way across the lake, I thought I saw a ship in the distance. It didn’t seem to change positions, so I targeted it with our binoculars and then zoomed out on the chart plotter and saw we were nearly 50 miles offshore. As we got closer, I realized I was seeing the Chicago skyline. I could see the top (thanks to the curvature of the Earth) of the Sears Tower (now called the Willis Tower) from almost fifty miles away. There aren’t many places where you get the chance to see something from that distance – America’s just so built up. Guess you need to be on the water.

The silhouette of downtown Chicago eventually appeared and the crew emerged to behold the stunning skyline. We entered the harbor and observed a hundred sailboats heavily swaying side-to-side but not falling down – like Weeble Wobbles – as a result of a SE wind and resulting surge. We turned north into the perfectly settled DuSable Marina and found our slip on the end of a T-head, an easy parking spot in a perfect location. No current, no surge, entirely protected, a fine floating dock and a terrific dockmaster. The crew spent the evening recovering from our little 90-mile open water passage. Revived soon enough, we all plotted our path to explore this magnificent city now at our doorstep.