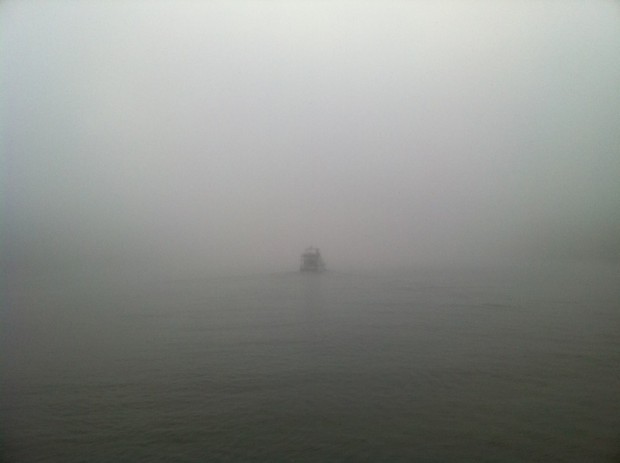 Here we are in the pea soup fog following the trawler Trident as we depart the C&D Canal and head for the Delaware Bay, then through Cape May, into the Atlantic and on to the Big Apple.

We left the Chesapeake and entered the C&D Canal, which connects the Chesapeake Bay to the Delaware Bay and is often full of big ship traffic. Must be the economy because we didn’t pass a single ship along the way. It’s also surprisingly scenic along the wide canal. We pulled into the Summit North Marina which is set in a pretty state park and made our way to the fuel dock. There we topped up the tanks with about 500 gallons of diesel. We last paid $2.37 per gallon for diesel. This round it was $3.87 for the pink stuff. We saw $5.50 per gallon while in Spanish Wells in Eleuthera (Bahamas) in March…and kept on going past that pump.

The good news is that on the way in we saw our friends Cathy, Gerald, Jessie, and Katie aboard the sailing catamaran Curiosity. We’d met the Curiosity crew in the Bahamas in Georgetown since Cathy was the superstar mom who organized the “kids net” each morning on the VHF just after the regular “cruisers net.” They all came over for a terrific visit, and we ate some home-baked cookies, played some guitar and harmonica, and generally yapped about the good times we all had in the Exumas with the many friends we all made down that way. Lots of fun.

We left the dock the following morning at daybreak, motored to the end of the marina and hit a bank of pea soup fog so thick we could hardly see to Muddy Waters’ bow pulpit. We decided to hover at the marina entrance since we’d heard a tug on the VHF give a security call on channel 13 noting that he couldn’t see his hand in front of his face and was just coming under a nearby bridge. While we were waiting at the marina entrance another trawler couple doing the Loop (whom we’d met briefly in Yorktown and then Annapolis) motored up past us and poked their bow into the misty abyss. We spoke briefly on the VHF and agreed that we’d follow them into the canal. Maybe agreed is too strong a word. I think I asked, “Why don’t you go first and we’ll go second?” Whichever way it worked, we both kept a watchful eye on the radar and on our AIS and the fog started to burn off about an hour later and around the time we exited the Canal into the Delaware River and Bay.

Before long we were in the Delaware Bay with an ebb tide pushing us out to sea and bringing our speed over ground to over 11 knots. Practically water-skiing speeds for us! We arrived into Cape May, New Jersey thinking we’d stay for the night and depart for Atlantic City, or New York, early the following morning (0 dark hundred, as they say) if the weather was good. But, the weather was good right then and there, so we decided to go out the inlet into the ocean and take a look. The seas were calm, with a 10 knot wind from the south. We then decided to keep on keeping on. All the way to New York City.

We plotted our course on the paper and electronic charts, devised a watch schedule, and hit the road. Jennifer, Keenan and Daria were terrific and I got some shut-eye while they took the helm, watched the instruments, and generally kept us pointed in the right direction and out of harm’s way. The ride was smooth and we even saw a whale along the way just before sunset. Other than a few fishermen we spotted on the radar, we didn’t see much. We ran the entire way between four and eight miles offshore, and we could see the lights on the coast the whole time. We eventually had 15 knots of wind behind us and 2 – 3 foot following seas with some white caps. This type boat does great in just those conditions, and it was a very comfortable ride. Thanks again to Kadey-Krogen for designing and building such a sea-worthy vessel.

We even had to slow down our pace quite a bit to be sure we didn’t arrive into New York in the dark. That was good for our fuel economy too. So more than twenty-four hours after leaving in the fog, we arrived in the channel off Sandy Hook, New Jersey (just across from New York) on a hot, humid, and hazy morning. We circled for a bit and then made for New York Harbor.

The Statue of Liberty, Ellis Island, a spectacular Manhattan skyline, more friends and family… More on the Big Apple and all its wonders soon.