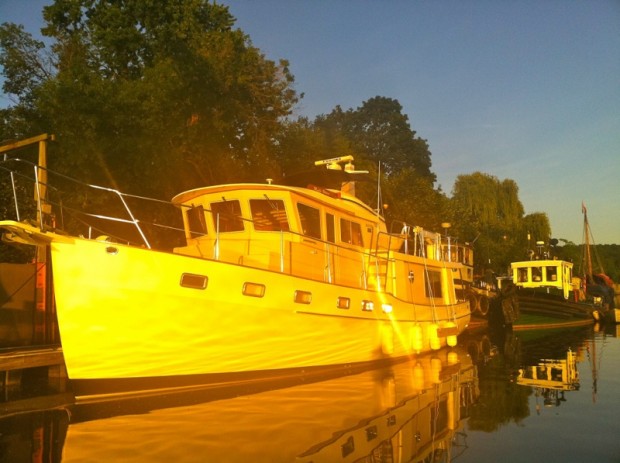 Here’s ol’ Muddy Waters tied-up near a few canal tugs just in front of the first lock on the Erie Canal.

Squeezed between a few working tugs at the Village of Waterford wall, we were staring straight at the Erie Canal’s first lock, which happens to be the first in a flight of five locks that would take us up 169 feet in less than two miles. Impressive engineering. If you’re interested in learning more about the Canal, I recommend a good book called Wedding of the Waters.

The Erie Canal, completed in 1825, was part engineering genius and part political determination. The original Erie Canal was built without modern machinery, instead relying principally on back-breaking labor. As with Chinese immigrants on the western-most portion of the Transcontinental Railroad, most the workers on the original Erie Canal were recent Irish immigrants. New York Governor Dewitt Clinton recognized the value of a water highway between the Great Lakes and New York as well as the entire eastern seaboard, opening the two regions to one another for much more efficient travel and trade. In its time it really was revolutionary.

The night before we were set to begin our passage on the Erie, we walked up to the first lock, poked around and found the first of scores of incredibly friendly, helpful and informative lock-masters on the NY State Canal System. This particular lock-master explained to the kids how a locking system works. Good ol’ gravity, just like in the Panama Canal (which Jennifer and I visited a few years ago after completing an adventure race in one of Panama’s eastern provinces).

Just as Keenan and Daria were learning the lock’s ropes from the Lock-Master, a boat heading east requested a “locking-down.” The Lock-Master, having now trained the kids for approximately five full minutes, let the kids turn the valves to allow gravity to do its job and drain water from the lock, lowering the boat inside. Presto, the boat was off to ply the Hudson.

Next morning it was our turn to begin working our way across this bit of engineering genius, now in its third incarnation. The kids and Jennifer did a masterful job of tending the lines and keeping us off the slimy walls when water rushed into the locks and turbulence bounced Muddy Waters around. Thanks to good advice from our friend and mentor Dennis Fox, we’d built fender boards from a set of 2×4’s. They’ve been distributing pressure across a wider span of our hull than would our fenders alone. Plus, they’re picking-up all the slime our fenders otherwise would. Back in the day, boaters would attach bales of hay to fend off the walls.

Because of some wet weather, we hit a couple vicious cross-currents when entering a few locks, especially Lock 11. Since a lock is typically adjacent to a dam, we found ourselves bracing for roaring white pushing us sideways as we were entering a few locks. In others, strong eddies practically shoved us into the locks. Once in a lock though, everything’s calm as can be. No wind or current. Just two muck-covered walls and two enormous mitered doors at each end.

We saw a large Hatteras motor-yacht emerge from one lock and watched all 50 tons of it move in an instant about 25 yards to one side. The area it entered just outside the lock looked like Class V rapids. The captain put the wheel hard over to counter the cross-current and brought the boat safely back into the channel. I watched through our binoculars, and I could see the captain put his full body into the turn.

We watched the entire event, spoke to the Hatteras on the VHF and discussed what we’d do as we entered the lock. Even prepared and angling Muddy Waters in anticipation of the cross-current, the rapid sideways water turned us 90 degrees and thrust us toward the high concrete wall. Fortunately we were able to employ yet another tip we’d learned from Dennis Fox. Keep some RPMs and power in reserve so you can punch through the surf. We force fed our CAT3208 a bunch of diesel and also put our wheel hard-over, using our barn-door sized rudder and extra RPMs to power through the current. We then hit the calm eddy and glided into the lock. Phew.

First overnight stop for us on the Erie was Schenectady. When the Samway family came from Ireland in the 1850’s during the Irish Potato Famine most landed and stayed in Maine. They were known as “one-boaters” since they could only afford to take one ship upon leaving Ireland. The wealthier (well, the less poor) might take another boat to Boston, New York, Baltimore and so on down the U.S. east coast. At least one Samway family member, however, made his way to the Schenectady area, where Irish laborers helped build the original Erie and succeeding canals.

Though the Samways have moved on, we did meet with one of Jennifer’s sister’s childhood friends, Natalie, and her lovely family. We welcomed them onboard Muddy Waters for a tour and visit and then they took us to Little Italy in Schenectady for an authentic home-cooked meal and then for some delicious home-made ice cream. It’s always nice to see friends along the way on the Great Loop.

Unfortunately, the next day was our first of a full week of rain, really our first spell of wet weather since we left Miami Beach on January 1st. We’d had wind, thunder-storms, and high heat, but not steady rain. Guess we were due. We spent the next three days motoring and dodging debris. Twice we tied up at lock walls for the evening. Just us, a couple massive bollards and nature. One of our cruising guidebooks said it’s so quiet at some of these locks at night that city folks can’t sleep. We slept fine, though one night we had to tie an extra line to a light post when a squall came through with 15 minutes of horizontal rain. We checked our anemometer and saw 30 knot gusts. Gets your attention on a boat, even when tied to a wall in a narrow canal. Keenan was quick to rise and put on his foul weather gear and come outside with me to connect two lines to reach around the light post.

One night we stopped in Little Falls, NY, arriving past 8:00 pm after a long day on the water. We decided to mosey into town and see what was still open. We found a great coffee shop, with ice cream, books, and…just a lot of stuff. Like a trading post really. Check-out Jennifer’s food blog Eating Onshore to see more about the cool place we found.

With all the rain and significant water flow, we also worried a bit the Canal System authorities might close some of the locks. So we motored on some more. In all, we spent five days on the Erie Canal, each a long one. We learned the day after we’d departed the Erie that the NY Canal System Authority had to shut down three of the locks because of the heavy rainfall.

After completing the eastern portion of the Erie Canal, we then made sharp right turn and started down the Oswego Canal’s seven locks leading to Lake Ontario. We tied-up at the city wall between Locks 7 and 8 in Oswego, NY and decided to spend a day walking the city. We saw the fort, public library, various parks and learned a bit about Oswego’s history as a community of tolerance in troubled times – whether accepting runaway slaves from the southern United States or Jewish victims of Nazi persecution in the 1930s.

So much history on the Erie, we were disappointed to miss many of the towns in our push through the weather. We all read a good amount on this amazing highway connecting the new and the established in early America. Passing through it on Muddy Waters brought so much of the history to life for us and the kids.