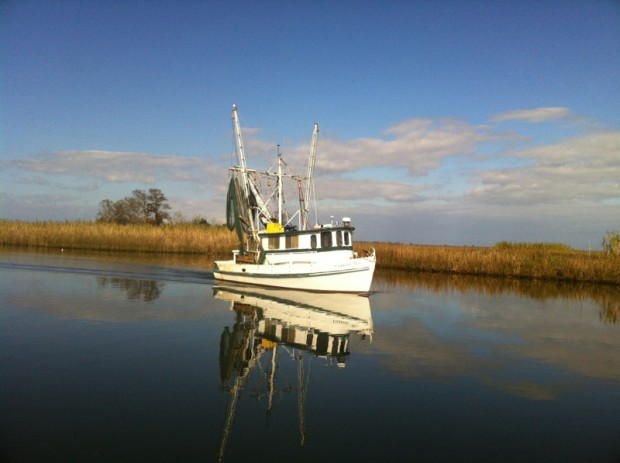 Here’s a shot of a relatively small fishing vessel in Apalachicola. Because of the rich sediment flowing in from the rivers and streams that converge here, this charming town is known as one of the finest places anywhere for oysters.

We woke up to thick fog on Mobile Bay so made the best of our time before the skies cleared. We knocked out a few chapters of Geography, squeezed in some exercise and took another look at the charts. Once the mist lifted we pushed off. Destination, Florida.

Before crossing the state line though, we pulled off the ICW directly onto the docks of Lulu Buffet’s waterside restaurant. You might recognize the name. Lulu is singer Jimmy Buffet’s sister and an Alabama native. Jennifer read that Lulu sources nearly all their food locally, and they have a refreshingly healthy menu. Not many places you can pull in on a 50 ton boat and have lunch at a table fifteen feet away. Listening to Jack Johnson, Jimmy Buffet and other acoustic and folk tunes, we felt like we were back in the Florida Keys already. Having just been in 20 degree weather a week earlier, we also soaked up the noon-time sunshine and warm weather, wearing shorts and t-shirts.

Less than an hour later, we were in sunny Florida. We were welcomed in by dolphins in our bow wave, pelicans, seagulls, palms and the captain’s favorite – salt air. Ah, starting to feel like home. We celebrated the moment perched on the bow counting the dolphins swimming with us.

GIven our late morning departure and our brief stop for lunch at Lulu’s, we didn’t arrive into the Palafox Marina in Pensacola, Florida until after sunset. We said hello to a few fellow Loopers in the marina and settled in for the evening, happy to be in our home state. Next morning we set off to walk Pensacola’s historic main street, just a few minutes from Muddy Waters. The city was settled in 1559, before even St. Augustine, but a hurricane destroyed the settlement the same year. Pensacola is also known as the City of Five Flags since five different national flags have flown over the city since its founding.

A highlight in Pensacola was our half-day visit to the National Naval Aviation Museum, home to more than 150 meticulously restored naval aircraft (Navy, Marines, Coast Guard) from all eras. Keenan was like a kid in a candy store or a sailor in a marine supply store, darting from plane to plane and reading as fast as he could before moving to the next exhibit. We all watched a fine documentary on WWII era planes recovered from the Great Lakes – which were used as training grounds for carrier take-offs. We also joined an informative tour led by a retired Marine and Korean and Vietnam War veteran who interspersed moving commentary with an encyclopedic knowledge of the aircraft.

The kids also went into an F-4 Phantom simulator that looked to me like a giant blender attached to uneven parallel bars. They seemed to love it, especially flying upside down. One attendant said to the other: “Wonder if we’ll need to wipe it down this time.” No worries though, these kids have been at sea for a year and the movement didn’t seem to phase them. The grade school onlookers who arrived half way through the ride couldn’t believe two kids stepped out of the blender when the flight simulation was complete.

Fellow Loopers on the boat cBay had called Jennifer earlier in the day and asked if we could check the lost and found at the museum since they suspected they’d left their camera there. No luck at lost and found. But while in the cab back from the museum, Keenan found a camera between the seat cushions. We flipped through the pictures, and sure enough it was their camera. We call it Looper Luck. We were able to deliver it at the next stop.

Before returning to Muddy Waters, we asked the cab to stop at West Marine so we could pick up our paper charts for the west coast of Florida, a few spare navigation lights and a new log book since we’ve filled our first. With the meter running, we rushed through the store looking for what we needed. Someone said, “Hey, you’re the Samway family!” Turns out it was a fellow Krogen owner who’d seen our website. And here we thought only our family members and good friends ever visited our website. We’re honored anyone else would take a peek.

In true boater fashion, John offered to drive us back to Muddy Waters so we didn’t have to take a cab. We thanked the taxi driver, paid him and then rode back and got tips from John on cruising these parts. I explained that we’d cruised at night a few times but didn’t much care for it when coming into marinas or through the tight channels. John agreed and said he never much liked it – especially when he was navigator of the…aircraft carrier the USS Kittyhawk. Hmmm, seems like an entirely different universe really. We were grateful for the thoughts on cruising the Panhandle and enjoyed hearing stories about the challenges of bringing a super carrier into places like Philadelphia, Norfolk and even Valparaiso, Chile at night.

Up early, we departed the next morning for the area around Fort Walton Beach and Destin, finally settling in at the Bluewater Bay Marina in Niceville. We ended up docked just in front of cBay and were able to return their lost camera. We met a few couples on the docks and chatted and listened to their stories, including of travels around America in an RV – a sort of Great Loop by land.

By now, we had a goal to be in Apalachicola by Thanksgiving, so we pressed on again the following day, landing mid-afternoon at the city-run St. Andrews Marina in Panama City on the day before Thanksgiving. Not a soul around when we landed. We tied up and went for a walk through town and found an ice cream shop still open. While Jennifer went for a run, the kids and I walked the commercial docks and admired the character-filled fishing vessels – and we mean both the boats and the fishermen.

Thanksgiving morning and we were underway with Jennifer and the kids chopping and stuffing and baking in the galley. Muddy Waters smelled like pumpkin pie all day. Umm good. We arrived into the Scipio Marina in Apalachicola early afternoon, once again the only ones around. In a beautiful setting on Scipio Creek, with swaying marsh grasses to one side of us and pelicans flying up and down the creek like it was an aviary highway, Jennifer set up a royal feast for the four of us. (Read the tasty details on her food blog linked at the top of the page.) We gave thanks for all the blessings of this year, especially the chance to share so much time together as a family.

While in Apalachicola, we’ve explored on bikes, on foot and on waveboards. (Ok, only the kids ride the waveboards.) Because of the rich soil coming from the river sediment emptying around here, locals say Apalachicola has the best oysters in America. Every restaurant is either an oysters-only place or one that features it on the menu. One advertises that it serves them two dozen different ways. Some of the other boaters have been on an oyster crawl, going from place to place through the day.

One local artist, Amy Friedman, produces beautifully colorful works of art, often using oysters as a central theme. We got to meet Amy at work on a piece in her studio and asked if she might be able to give an art class to Daria on this busy holiday weekend. Well, not only did she give Daria a course in painting, but Daria got to spend half the day learning from Amy and producing her own little masterpiece of seaside colors on canvas. Amy explained that she loved the pace of life in Apalachicola and that her art and mind flourish in this setting. We’ve so enjoyed meeting people along the way on our trip and having the chance to hear and share stories. A special thanks to Amy and her family for receiving us so graciously on our visit to this lovely town. Daria’s inspired. Can’t ask for more.

We also chatted with a local photographer and photojournalist, Richard Bickel, who produces stunning photos of Old Florida, especially oystermen and other fisherman, and displays them in a gallery on the main street. As Bickel told us, he likes to exalt the working man. You’ll see that in his moving black and white shots of locals, which seem a natural compliment to the nature photos of one of our favorite photographers, Clyde Butcher. Not surprisingly, those two have collaborated on various projects. Bickel also gave Keenan a few thoughts on what it’s like today to be a photographer and a photojournalist. It doesn’t sound easy. Still, Keenan’s ready to give photography a go and this year aboard he’s had lots of good advice and wonderful material with which to work.

We’ve enjoyed all of Florida’s Panhandle and especially the charming town of Apalachicola with its beautiful historic homes, working fishing fleet and kind people. The windy weather and extra time here has given us a good opportunity to settle in and learn more. Slow has been so good to us on this entire trip.