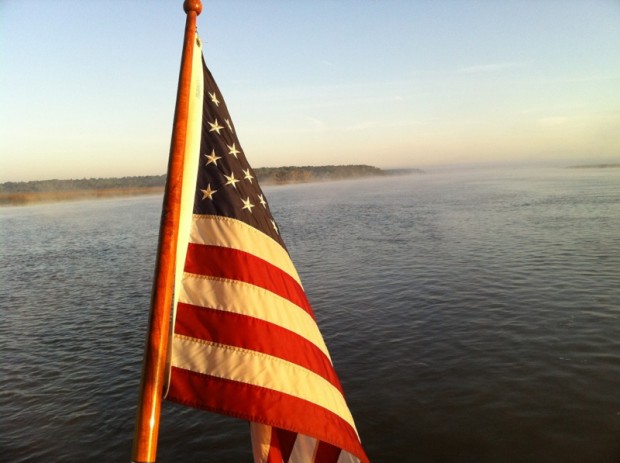 Here’s a shot of Old Glory off our stern early one morning as we anchored in Redbird Creek in Georgia (just south of Savannah).

With Georgia on My Mind playing in our own minds, we set foot on terra firma in the state of Georgia. We actually crossed state lines in Mudcat, not in Muddy Waters. While in Fernandina at the northeastern tip of Florida, we lowered the dinghy and cruised about five miles north, across the St. Marys River (which divides the two states) to Cumberland Island, Georgia. Cumberland Island, stretching more than 15 miles, is only accessible by boat and is Georgia’s southernmost barrier island. First purchased by a former Revolutionary War officer, the Carnegie family later bought it and then eventually donated the island to the National Park Foundation in the early 1970s.

Though there’s an abundance of wildlife on the island, the kids were most anxious to see the wild horses (feral actually since they’re descendants of domesticated horses). They weren’t disappointed, and we spotted more than a dozen horses roaming the beaches, including one mama with her foal on the beach. We also learned of a healthy debate about whether the horses should be tended, treated, and managed by the park wardens. They’re not today, though Jennifer noted they could probably use some assistance since this island with the constant salt spray isn’t necessarily a natural or healthy environment for horses. In any case, look out for some terrific photos Keenan took of the horses.

We probably walked seven or eight miles on Cumberland Island that afternoon, half on wide-open Atlantic beach and the other half under the spectacular canopy of Wizard-of-Oz-like oaks covering the island. We almost brought our folding bikes over to the island since we’d read about biking trails; alas, our little boaty bikes are great for city riding but aren’t so durable on the trails. Glad we didn’t haul ‘em over. No BMX-ing for the Samways, just a slow-go on foot. Each time the kids asked if we were almost there, I said the dinghy was tied-up just around the corner. That used to work. Not anymore. The kids threatened mutiny. But, the dinghy was eventually around some corner, and the swabbies both fell into line, and all was good.

We then dinghied over to the quiet fishing town of St. Marys in Georgia. Good thing we scanned and photocopied the relevant pages of our charts and then stuck them in some waterproof covers. With all the rivers, tributaries, high marshes, markers, and boat traffic, it would have been easy to get lost. With Keenan at the helm, we found our way to the town docks. Keenan expertly set down our little lunar lander in 20 knots of howling wind. Didn’t see that wind in the forecast; but, we’re learning that weather’s always lurking when you’re on the water. We wandered St. Marys and found a great little coffee shop, grabbed lunch, hit the general store for some homemade candy, read all the historical placards around town, then motored back about 30 minutes to Fernandina Beach and Muddy Waters.

Next morning we set-off for Jekyll Island, former stomping grounds of the Rockefellers, Vanderbilts and other titans of the American industrial age. We borrowed four of the marina’s beach cruisers and biked much of the highly biker-friendly island. We also took a horse carriage tour of the historic section of Jekyll and had an entertaining tour guide/playwright who painted a memorable picture of the colorful lives led by the rich, famous, and glamorous of another age.

We learned that Jekyll Island is: the western most point of the Atlantic Ocean; due south of Akron, Ohio; and, west of the coast of Ecuador, making it above the Pacific Ocean. We also learned that the then president of AT&T participated in the very first transcontinental telephone call from Jekyll Island (the other callers were Alexander Graham Bell, Thomas Watson and Woodrow Wilson). Not an hour after learning about that Jekyll call, I got a cell phone call from a good friend living in Singapore. How times have changed!

Jekyll Island is also famous for its public golf courses, and Keenan and I squeezed in nine holes. (See Keenan’s sweet swing in the photos – thank you to his coach, Patrick MacLeod of Miami Beach!) The millionaires and billionaires ended up migrating further south in the winters (in part thanks to the efforts of Henry Flagler in developing Florida’s east coast), and Jekyll lost some of its luster by the teens and twenties. Most of the island is now park land, and the state of Georgia has also done a fine job of restoring the buildings and making the entire island very welcoming.

We next sat through the first series of big storms that ripped through the southern Untied States. We were tied up on a face dock at Jekyll Harbor Marina, squeezed between a large sailboat and another trawler. We had a little bit of fetch to the southwest, just the direction the wind (gusting to 30 knots) was coming from. The waves were slapping the boat hard and crashing over the dock, and we awoke to an aft cockpit soaked with salt water. But, the wind had died down, and we were ready to move again.

The following day we decided to run as far as we could, timing a few shallow spots around the tides. We anchored in a beautiful spot in Redbird Creek. With a full moon, the already large 9-foot tides in Georgia were even greater than usual. We squeezed through the entrance and anchored a half-mile into the creek in about 20 feet of water. We were surrounded by mud and reeds. And then a few hours later, we were lifted up above the marshes by the tide and had a spectacular view of a rising full moon over the sweeping green and brown landscape. We also listened to the songs of thousands of birds in the marshes as they serenaded one another (and us, in our minds). Having spent three months anchoring from January through March, it was nice to be back out on our own.

As the sun set and just as we turned on our anchor light, Jennifer noticed a tug pushing a barge through the ICW and then suddenly toward us. It was hard to determine its course since we could only see the tug’s pilothouse moving over a sea of reeds. Jennifer got a fix on it with the binoculars from higher up on the boat and determined this big tug was headed down our little creek. Hmmm, we had all the systems shut down and were anchored smack in the middle of the creek, with a barge moving toward us. I quickly called the tug on VHF channel 13 (which tugs monitor) and asked if he was proceeding down the creek. Because we’d, um, be up the creek if so. In a deep Georgia drawl, the tug captain told us he was just pulling into the mouth of the creek to anchor for the night and would be moving out early in the morning. Phew, we were good right where we were. And it was one of the prettiest nights we’ve had since returning from the Bahamas.

Early the next morning we had to take our boat pole and dislodge the hundreds of dried reeds that had gathered like a big mustache on our bow – courtesy of a ripping current from the tides. We then had a fairly easy run up the ICW to Thunderbolt, Georgia. We learned there that it’s mighty tough to place nearly fifty feet and fifty-five tons into a tight spot when the current is rushing from astern. Jennifer, Keenan and Daria quickly moved all the lines and fenders to the port side of the boat, and we came in against the current and managed to stick the boat into its spot. Phew again. We chose this spot – Thunderbolt Marina – because it’s a short taxi ride from Savannah and because…they deliver warm Krispy Kreme donuts to each boat in the marina at 6:30 am each day. Ummm good, the kids were sold.

We spent the next two days having an enjoyable visit with Jennifer’s parents who traveled over to the coast from the Atlanta area. We completed a walking tour of many of the Savannah public squares, learning heaps about Georgia’s colonial founder James Ogelthorpe plus a lot of Revolutionary War and Civil War history. We also saw the Savannah river front’s carnival-like atmosphere of shops, street performers, and tour groups. Seeing all that and also watching the large ships traveling on the Savannah River, we were glad we chose not to come up the river to tie up and instead docked just a few miles away in a quiet fishing community.

The following day we drove with Jennifer’s parents to Tybee Island and visited Fort Paluski, a Civil War era brick fort once thought impenetrable. New weaponry introduced by Union forces breached the defenses in only two days of fighting, and that was it for brick forts! We also saw the great great grand daughter (fully uniformed) of a Confederate soldier demonstrate how to load and fire an authentic Civil War era rifle, in this case an Enfield, supplied to the South by the British. Since this is the 150th year since the start of the Civil War (April 12, 1861), we’re all learning lots about the horrible conflict that claimed more than 600,000 lives and how the war has shaped American society up to present day. Important homeschooling and life lessons for all of us.

We thoroughly enjoyed Georgia’s coastal waterway – its history, the winding rivers, the sweeping marshes, and the friendly people. Next stop, South Carolina.