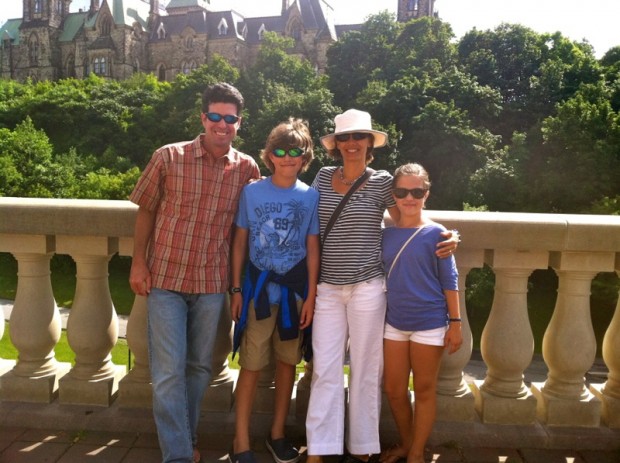 Here we are next to the Parliament building in Canada’s capital city of Ottawa, located in the province of Ontario. We spent a terrific day visiting with our friends Wayne and Ruth, fellow Loopers.

We departed U.S. waters early in the morning for the second time on our journey, this time crossing the northeastern tip of Lake Ontario. With a reasonably stiff westerly breeze, we had a nice chop directly on the beam and needed our NAIAD stabilizers for the first time since our ocean passage from Delaware to New York. We arrived into the Confederation Basin Marina in Kingston, Ontario early afternoon and started a terrific four-day stay in this lovely university town that was the Province of Canada’s first capital.

Our Canadian friends Wayne and Ruth, who just completed the Great Loop aboard their boat High Spirits and whom we met in Fernandina Beach, Florida, picked us up the following morning, and we spent a fun and full day visiting a few of the manually operated locks along the Rideau Canal Waterway and then on to the capital city of Ottawa. What a beautiful capital, and like Washington, D.C. a town with a buzz of politics, a bit of self-importance, and a civil service cadre of administrative agencies that often are the ones who really make the wheels go ‘round. Ottawa has a distinctly European feel to it, with a lively outdoor cafe scene and the imposing gothic architecture of the Parliament building and other government offices.

While in Ottawa we also got to watch a few boats pass through the Rideau Canal’s impressive flight of locks smack in the center of town. Many Loopers choose this scenic route, traveling up the Hudson River, past the Erie Canal, through Lake Champlain, to Montreal, then toward the St. Lawrence River from the Rideau Canal.

Best of all on this little side-trip was the time we got to spend with Wayne and Ruth, sharing laughs and good memories of the Loop, gathering lots of good advice from them, learning heaps of Canadian history and current political happenings. Who knew the Canadians have an entirely different view of the War of 1812?! The kids thought it interesting that not much changed geographically as a result of the war, yet both sides seemed to claim victory.

We arrived in Canada only a few days after the royal visit from Prince William and the Duchess of Cambridge and learned much more about the differences in the way the United States and Canada, uh, parted ways with the British. Thank you Wayne and Ruth for hosting us in your capital and most importantly, thank for the good friendship!

Back in Kingston, we did our usual bit of exploring. Cafes, museums, live music, farmers markets, parks, you name it. We walked through the lovely Queens University campus, listened to live blues in the park adjacent to the marina, jogged most of the city (including to Fort Henry). Daria dropped-in on a jazz dance class, Keenan practiced lots of bass. We visited two outstanding museums – the pump house steam museum and the Maritime Museum of the Great Lakes.

We then made for Trenton at the beginning of the 240-mile Trent-Severn Waterway that would take us to the Georgian Bay. We anchored out on the way in a protected spot behind a hill and enjoyed a quiet evening of board games. Our favorite has been Bananagrams, introduced to us by my sister Jaleh and brother Chris a few years back. It’s a fast-paced word game that has some similarities to Scrabble.

We made it into Trenton the following day and quickly discovered that the town marina is also the town ice cream shop. Convenient! And so the kids started their run of getting Kawartha Dairy ice cream and just about every stop along the waterway. We even visited the company’s factory along the route. You don’t often get to boat in dairy-farming country.

We walked most of Trenton that evening and also gathered as much local knowledge as we could from the outstanding dock-master at the city’s Fraser Park Marina. The following morning we’d be off to begin the first of 44 locks on our way to the Georgian Bay.