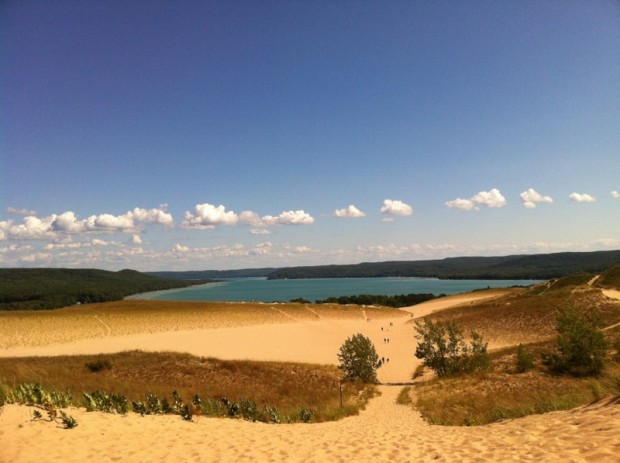 Here’s a shot of some of the sand dunes from Sleeping Bear Dunes National Lakeshore, recently voted (with more than 100,000 votes counted) on ABC’s Good Morning America, as America’s most beautiful place.

We spent four nights camped out in Charlevoix harbor as we waited for stiff northwest winds to abate. Funny how this type weather means one thing if you’re at sea and another on land. On the water, 25 knots from the northwest means stay home. On land, the same high pressure system brings lots of sunshine, dry air, and cool and steady breezes. Time to put on a wind-breaker, go for a brisk walk and maybe even fly a kite at the beach.

Since we have four bikes onboard, we spent the days exploring the town and nearby areas, enjoying the weather from the shore’s safety. Lake Charlevoix was a bright and shiny turquoise, and we snapped a few photos of empty Adirondack chairs on foot-printed white sands. It could almost have been almost anywhere down island. We especially enjoyed getting a close-up look at the Tolkien-like mushroom homes designed by Earl Young. His architectural influence is widespread in Charlevoix across private homes and in public spaces.

We also met another cruising couple, the Parkers, owners of a Krogen 48’ called Idyll Time, and learned a lot about cruising these parts and farther down river near their hometown of Chattanooga, Tennessee. Later this year, we plan to travel up the Tennessee River a few hundred miles to visit the Parker’s hometown and also get a chance to see some of Jennifer’s family members who are only a few hours south in Georgia.

We finally got a break in weather and pushed off for Leland, Michigan. We found a newly renovated city marina at the foot of a charming historic fishing village called – what else? – Fishtown, with working tugs bringing in their catch from the lake and selling whole fish and fillets to eagerly awaiting customers.

We also learned this is wine country in Michigan. Situated on the 45th parallel (that’s latitude), this region – while distinct in hundreds of ways – shares sunlight angle with Bordeaux, France. Jennifer and I don’t know much about wine, but that certainly sounds like a check in the plus column. While strolling the art galleries, ice cream shops and knick-knack corners, we also found a terrific local bookstore and the kids spent a few hours padding their growing collection of paper treasures.

Next stop, Frankfort. From Leland to Frankfort we passed the most spectacular sand dunes we’ve seen along the Michigan coast. With thousands of years of prevailing northwesterly winds, this shore is soft and sandy; the western side of Lake Michigan, while more protected from wind and waves, is much more rocky and less forgiving to cruisers. Don’t get the Wisconsin boaters started though because they’ll let you know right quick that their side of the lake is as, or more, beautiful than the eastern side. We’ve run into lots of Michigan and Wisconsin pro and college football fans, and we aren’t disagreeing with anyone. These are some proud, loyal and, uh, rabid fans. We don’t want to cross any of ‘em. We just like ALL of Lake Michigan.

A few hours after we rounded the Frankfort lighthouse and tied-up at the city marina, we saw a familiar boat arrive – our friends and fellow Loopers, the Fallon family, on Inconceivable. We me the Fallons in Peterborough, Ontario while on the Trent-Severn Waterway. We had a fun-filled few days back then – tubing, bridge jumping, visiting museums and just hanging out with Andrew, Elizabeth and their son and daughter Sebastian and Paisley. We hadn’t seen them since Canada so it was nice to see them pull up.

After docking, the Fallons came by for a visit and we caught up on our travels and adventure. Andrew, who’s an internet security expert, had to fly to the west coast for a week of work, so we plotted to explore the area with Liz and kids the following few days. We rented a mini-van and drove north on the M-22, one of Michigan’s scenic coastal highways to the Sleeping Bear Dunes National Lakeshore. This place was recently voted on ABC’s Good Morning America as America’s Most Beautiful Place.

We packed picnic lunches and were off for the hills. We drove a scenic loop and stopped to soak-in the beautiful vistas in all directions. Forests, dunes, Lake Michigan, various crystalline inland lakes and rolling hills. Then we arrived at the hiking dunes themselves. The kids were off and running. No, they were sprinting. Up hill. Shoeless. The weather was perfect for it – sunny, breezy and cool. On we went toward Lake Michigan.

They told us at the visitor center it was a 3 – 4 hour roundtrip hike, and after getting about three-quarters the way there we realized we were seven people with only about 12 oz. of water remaining. Oooops, for all the trip planning and provisioning we all do onboard, we didn’t think to bring much on this hike. We all agreed that living aboard means we’ve seen lots of the Lake, so we’d turn back and just enjoy the dunes themselves. We did. The kids raced down steep hills, practiced baseball slides, got some air, wiped-out and just generally had loads of fun.

We next made our way down to the Lake on four wheels and toured a local boat museum, a blacksmith shop, and walked the stunning shoreline. Then it was back to Frankfort after a day filled with natural beauty and exercise, all in the company of friends. On the way back to our boats, we spotted an organic chocolate shop in a wooded area just off the M-22 and past the town of Empire. A surprise treat for all of us. Check-out Jennifer blog on Chocolate 101 for more mouth-watering details.

Next day we traveled with the Fallons back toward Sleeping Bear Dunes, this time stopping at the Platte River for a few hours of lazy river tubing. That was following our follow-up two-hour class on cocoa farming, the chocolate trade, and chocolate making at the Grocer’s Daughter. C’mon, we had to work off calories! What better way to follow classwork than with a few hours of sitting on your can in crystal clear water, slowing winding your way downstream, seeing nature while reclining a foot above the river, and enjoying the company of friends along the way? The kids had good fun with Sebastian and Paisley, and Jennifer and I enjoyed hanging out with Liz.

Charlevoix, Leland and Frankfort. Three memorable stops along the sunset coast of Michigan. We also enjoyed the cruising here, with generally calm seas and beautiful views of rolling hills, clear blue waters and sand dunes to make any kid plead non-stop to sled down the warm and powdery mountains and any parent long to be a kid again.