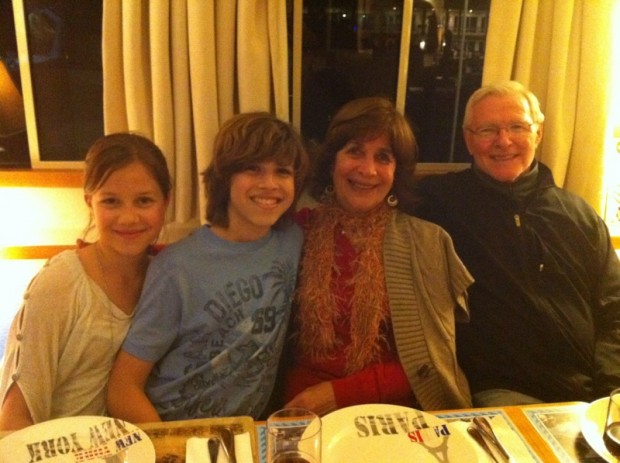 Here’s a shot of the kids with my mom and dad in Naples aboard Dennis and Julie Fox’s Krogen Seafox. We’d last seen Oma & Pappy in Annapolis and were excited to have them onboard again – a two and a half hour drive for them from Miami and a four day trip for us!

Whenever we anchor out we remind ourselves that it’s an unrivaled pleasure in boating. The self-sufficiency and solitude, the stars, the wind’s whisper, the slow movement with the tides, the water’s gentle slap on the hull. There’s a paradox in there too since sailors often say they sleep more soundly overall at anchor, yet they wake up and check on their boat multiple times over the course of the night. How could that be? Sailors experience both deep sleep and heightened senses and alertness within seconds of one another. Though we’re not in practice like we were earlier in the year, I slept soundly yet rose regularly to check on Muddy’s position relative to shore and to our neighbors.

Safely fixed in the same place we started the evening before, we were up with the sun, weighing anchor and bidding farewell to the neighboring sailboats in this fine anchorage nestled between Useppa Island and Cabbage Key. We then headed south on the ICW, with Captiva Island and then Sanibel Island to our starboard. We’d traveled to those islands by car a few times and have also sailed in this area in the past. Florida west coast sunsets, especially in the summer when storm clouds rise above the Gulf of Mexico, rival all others.

With the wind at our stern and an ebb tide, we rounded the Sanibel Island Light with a flourish and made our way back into the Gulf of Mexico for a smooth open-water ride south to Naples. Stray storm cells greeted us offshore as we approached the Naples area but quickly gave way to blue skies. We entered the well-marked Gordon Pass and turned to port, working our way back north about three miles. We passed mansions and mega-yachts. Fancy place. Wonder if they’ll let us in. We made our way to the Old Naples Seaport and were greeted by none other than our friend and mentor – Dennis Fox.

Though we talk fairly often and are regularly in e-mail contact, we haven’t seen the Foxes since we left Georgetown in the Exuma islands in early March. We were all so excited to re-connect with the Fabulous Foxes. (See our March 12th blog post for more on the Foxes.) Dennis and Julie suggested this gem of a marina – floating docks, kind staff, and minutes from the heart of town – that’s still slowly recovering from the real estate downturn.

Once tied up, we all exchanged hearty handshakes and hugs. The kids couldn’t wait to show Dennis some of what they’d learned on the water. Jennifer and I watched with lots of quiet pride as the kids told Dennis and Julie all about our adventure – favorite stops, toughest moments, nearest escapes, prettiest anchorages, most memorable neighbors, etc. The captain and admiral also enjoyed catching up with Dennis and Julie and hearing about their own trip along the Great Loop – their second one!

The next day the kids’ smiles brightened even more as my mom and dad (Oma and Pappy to the kids) arrived by car from Miami for a visit. We last visited with them in Annapolis, and the long hugs from the kids were heartwarming to watch. The Foxes had also done some research for us on places my parents might stay and found a terrific resort right next door to our marina. The Foxes had us all aboard their Krogen 58, Seafox, for a tasty dinner. Just like the first night we ate aboard Seafox back in 2010, Keenan gobbled up Julie’s chicken and rice dish like…well, like a rapidly growing thirteen year old. Same this go ‘round.

Dennis also gave my parents a terrific tour of Seafox. (See the photos of me, Keenan and Pappy in the spotless engine room.) Dennis also answered a few questions I had on mechanical issues aboard Muddy Waters. We also sat down at his chart plotter and took a look at a few potential anchorages on the way to the Keys. Dennis is a great teacher and we all – especially the captain and chief engineer – so enjoy learning from him.

We spent the next day with Oma and Pappy talking travel, laughing and sharing all we could about all we’d seen and done in the past many months. With some research by Jennifer, we found a terrific organic market and enjoyed lunch on the patio. Jennifer and I then borrowed Pappy’s car to run some of our own errands while my mom and dad accompanied Keenan and Daria to…another bookstore. We love words, authors and bookstores. My parents are also voracious readers. As the saying goes: the apple doesn’t fall far from the tree.

Later that day, Jennifer, Daria and my mom also made a Christmas shopping run. At the same time, Keenan and Pappy engaged in a 90-minute game of chess poolside. They even attracted a few onlookers who asked how someone as young as Keenan could concentrate on the board for so long before moving a piece. They asked the same about Pappy, but I let them know that he was often just asleep during the match! Either way, Keenan cleaned Pappy’s clock. They’ve been playing for years, and chess seems an anachronism in today’s world of fast-paced, instant rewards video gaming. Glad that’s not the case with Keenan and Pappy.

Later that evening, we all made our way to the home of a family friend whom I hadn’t seen in many moons. Brian and his wife Helen, both of whom are doctors, have seven children and live in a beautiful old home in a densely wooded area of Naples. Helen’s stopped practicing medicine for now so she can homeschool their kids, and Brian has an innovative home-based pediatrics practice. We had a lovely evening meeting Brian and Helen’s kids, and we learned lots about their wonderful approach to medicine, home schooling and family. Just the type visit and evening that’s made this journey so enriching.

The following morning Oma and Pappy and the Foxes joined us for breakfast and we once again shared stories and had lots of good laughs. We then wandered down Naples’ main avenue to see the town, lunch with Oma and Pappy and then say farewell before they had to shove off for Miami. We had a wonderful visit and the kids started to feel much closer to home since Oma and Pappy are such an important presence in their, and our, lives there.