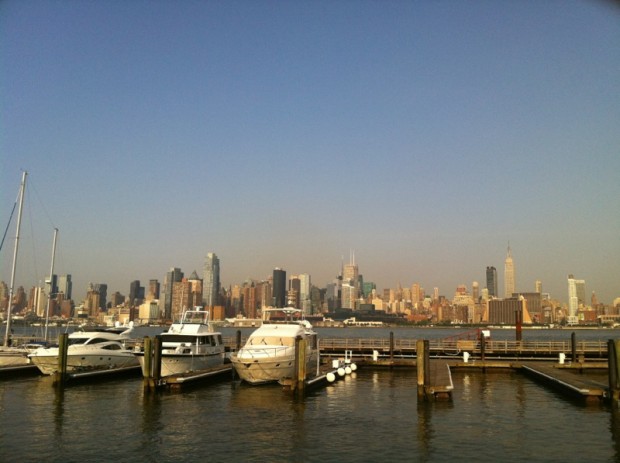 Here’s the view from Muddy Waters’ back porch while parked at the Lincoln Harbor Marina in New Jersey, just across the Hudson from midtown Manhattan.

Imagine you’re sixteen years old, just got your driver’s license, and are sitting at the wheel of your dad’s 1978 Ford station wagon. The yellow one with the faux wood panels, brown vinyl seats, bumper stickers, and most importantly here, a turning radius of about one city block. That one. Now, you’re driving it through morning rush hour in Times Square on a hot and hazy day. Crosstown traffic in a purple haze! That’s sorta’ how it felt driving ol’ Muddy Waters into New York Harbor.

Ferries, tankers, cruise liners, frigates, fishing boats, and pleasure boats. Helicopters, Coast Guard, marine patrol, and tow boats. And kayaks, sailboats and canoes. Probably swimmers too. All criss-crossing the harbor and the Hudson River. No traffic lanes here. Just get out of the way of the bigger boats. Pronto. Or else get squished.

Tired from our twenty-four hour passage but with senses heightened in the harbor, we tried to take in as much as we could from the top decks. And then, out of the haze, comes the Manhattan skyline. Imposing and brown and incredibly impressive. We’ve been to New York since 9/11, but we’ve never seen downtown from the water, not like this. It’s so clearly missing something that’s inked indelibly in your mind. And then you notice the magnificent structures around the ground zero area, as if the other skyscrapers have rounded up and rallied around the site.

And then as we get closer we see a lovely lady still strong and proud and carrying her light of liberty on an island park. We got the chills, even on this 95 degree morning, while passing the statue of liberty. Ellis Island even seemed to welcome us back from our offshore passage. While listening on VHF channel 13 to all the traffic with one ear, we talked to the kids about what it meant to arrive in America, just as all our families had in one place or another years ago.

We steamed up the harbor, passing Battery Park, Wall Street, the West Village, and Chelsea. When then made for the Lincoln Harbor Marina in Weehawken on the New Jersey side of the Hudson. While the marina breakwater wall did a fine job of minimizing the current, the angle of approach of one regular ferry made for a wickedly wavy marina. We could hear the squeaks, screeches, and strains of the past-its-prime floating dock right through our thick hull. But, the view from our back porch of mid-town was spectacular and made up for the noise.

While I went through our post-passage checks and shut-down and then prepared to catch some z’s, Jennifer took the kids on a walk to the recently revitalized town of Hoboken to visit Carlo’s Bake Shop, which is apparently featured on a TV program called Cake Boss. Keenan and Daria put this place on their list well before we arrived. I don’t know what they ate there or even whether the TV show is a good one, but I know they brought me a pretty spectacular red velvet cupcake. Carlo can definitely bake.

We spent four days in New York City and enjoyed every exhausting second of it. Welcomed by the madness of the harbor traffic, we were alerted to what we’d find ashore. Nothing really prepares you for the frenetic pace in the city. Life comes to us so much more slowly living on a boat, and we saw that moving with purpose in New York is necessary to get things done and often to simply survive. Watch-out or you will get run-over by a ferry, train, taxi, cyclist, pedestrian or even an entire crowd.

Navigating New York’s streets reminded me of a saying Dennis Fox has about entering or exiting a slip at a marina once you’ve made your calculations, released your lines and so forth. He says, “Once you’re set, you gotta’ drive it like you stole it!” And that’s how we visited New York. No, we didn’t steal anything. We just learned to keep moving ahead, even if we were just wandering and gazing at the city sights. We were never in idle and tried never to amble and certainly not flounder.

We started by meeting friend Gerry, whom we met in Eleuthera at Harbor Island, for a lovely breakfast in midtown. Gerri’s wife Cecil couldn’t join because she was busy directing and performing in a circus in St. Louis. From Eleuthera to Manhattan, world’s apart; it was wonderful to connect again and catch-up. Gerry pointed us in the right direction for music stores so Keenan could pick-up a few bass guitars tips and get in some practice time. Gerry also helped us get organized with a tour of The Juilliard School.

We spent nearly two hours with a small group, led by a second year Juilliard music student. What a remarkable place to study. The kids were impressed with the U.S. Naval Academy, the first university we’ve ever visited with them and a special one at that. It shouldn’t sound strange that they heard it takes some of very same qualities to be a Juilliard student: commitment, hard work, creativity, excellence, passion, teamwork, etc. The talent at Juilliard is simply world-class. The setting is like none other, sitting next to the Lincoln Center for the Performing Arts.

Over the next few days, Jennifer and Daria continued to visit the Lincoln Center area, attending two shows – American Ballet Theater’s The Bright Stream: A Dancing Collective and New York City Ballet’s Jewels. For Daria, who has been a student dancer at the Miami City Ballet for four years, this was a wonderful opportunity to see the place where Edward Villella, founder and CEO of Miami City Ballet, started his career under the genius choreographer George Balanchine. It was also an opportunity to see – in the crowd, in the flesh – the world renowned dancer…Mikhail Baryshnikov!

Daria also participated in a drop-in ballet class at the Alvin Ailey School of Dance. Though Daria met one qualification to enter, having danced in a program for a number of years, she was five years younger than the required age minimum. Hmmmm, she couldn’t pass for 16. So Jennifer and Daria spoke to the instructor and explained Daria’s dance background, our travels aboard a boat, and Daria’s passion for dance. That did it, and in she went. Nearly two hours later she emerged after a tremendous workout, and a number of the other dancers found us and said Daria was both brave and talented. We like that combination.

While Jennifer and Daria attended shows and classes, Keenan and I walked a good part of the city, including through Central Park, and found a half dozen cool musical instrument stores. Keenan played high-end bass guitars, and I got to strum some beautiful guitars. Maybe it’s a generation thing, but I was amazed at how effortlessly Keenan glided through the streets. One quick look at my iPhone, and he knew exactly how to move fifteen blocks, including side streets, one-way roads, etc. And he walked with purpose, weaving between people, never hesitating, no fear. Maybe it was his incredible desire to get to a music shop and check-out scores of bass guitars at each – electric, acoustic, even stand-up.

Keenan and I even attended the 9th Annual Big Apple BBQ Party in Madison Square Park. On a warm and rainy day, we listened to some terrific blues and stood right in front of the stage. We then met friend Christine who took us on a fantastic stroll to one of the coolest parks you’ll find anywhere, the High Line. They call it an aerial greenway, and it’s an old freight railroad track on the west side of town that’s been converted to a pedestrian friendly garden and thoroughfare. Check it out if you’re in town, you won’t be disappointed.

We also had a great visit with my cousin David who gave us a tour of his office on floor fifty-something of the Viacom building in the heart of Times Square. After a great dinner, we all walked to one of our favorite bake shops in the world – Magnolia Bakery. My brother and his wife Wendi (who moonlighted at Magnolia Bakery decorating cupcakes many many years ago) used to live just down the street on Bleecker Street, and they introduced us to the heavenly cupcakes at Magnolia. Jennifer and Daria use the shop’s cook book for a lot of their baking onboard Muddy Waters.

We also visited with Wendi’s brother Darren and his girlfriend Clarisse, meeting them for breakfast in the West Village and then for a walk through Chelsea Market where Jennifer soaked-up all the places that served local and organic eats and where I was entranced by Dick Waterman’s superb photography of some of the blues legends. We then made our way back to the High Line with Darren and Clarisse so that Jennifer and Daria could see this innovative park that Keenan and I had seen a few days earlier.

We also were able to visit with my good friend from high school David at his big fancy hedge fund office in mid-town where he is the general counsel. David and I met in tee ball in 1976 when we were both on a team called the Remnants. Who names a team the Remnants? I recall we were sponsored by a local carpet company. So there you have it, just like the big leagues, it’s all about the money. David and I were also debate partners in the 10th grade, and while David was one of the smartest guys in the school hands down, he also enjoyed a good prank every now and then. Like the time he made his own snap-n-pops, with some paper and something like silver fulminate from chemistry class, and then left a train of the little wrapped snappers outside the office door for the unsuspecting school officers to discover with their heels. Though we didn’t get to see David’s wife and their four kids on this trip, we had a great visit and look forward to a longer and fuller visit next round.

We also had breakfast one morning with good friend Corey and his wife June and their adorable daughter. Corey is a U.S. foreign service officer and currently assigned to the United Nations in New York, supporting our ambassador to the U.N. Next stop is D.C. for a year to learn Mandarin for their next posting in Beijing. Our next stop will be…Poughkeepsie, New York! A world apart. We also had a brief but lovely visit with good friend Ebele who was in town from California for meetings and presentations in the Big Apple.

As we sat watching the midtown Manhattan skyline from Muddy Waters’ back porch on our last evening, tuckered out from four days of high energy visiting and absorbing, we felt like we’d done as much as four sailors could do in four days in New York City. We – and especially the kids – explored, shared stories, met friends and family, and felt the constant movement and energy of this great city.