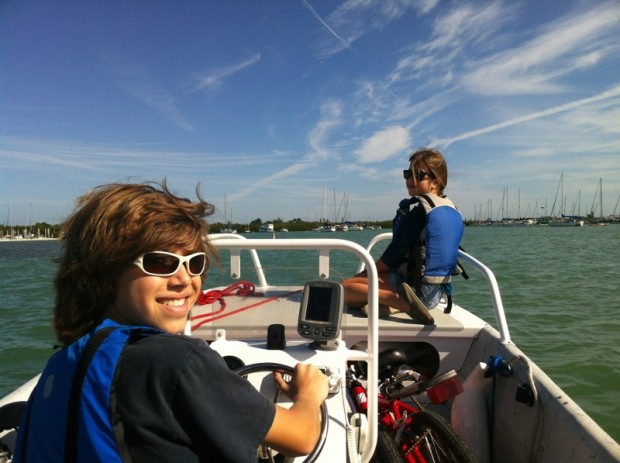 Keenan and Daria are in charge of our dinghy, Mudcat. They raise, lower, clean, maintain, drive and dock Mudcat. Here they are on our final day in Marathon.

Once back on the Atlantic side of the Keys and in the entrance of Boot Key Harbor, we hailed the municipal marina on channel 16. They assigned us a mooring ball in the beautifully maintained mooring field in this protected harbor, one of the few natural harbors in all of the Keys. We lowered the dinghy and made our way into the office to sign-in, saying hello to other cruisers – some who’ve been coming here for years and others who looked a bit like us last year and about to embark on a long journey excited about the unknown that lay ahead.

Once checked-in, the kids were anxious to head back out of the harbor and into open water to go tubing behind Mudcat. By the time we cruised to the edge of Vaca Key, the sun was about to set. No matter. The kids were going tubing come heck or high water. And tube they did, until dark. Pulling themselves back into Mudcat with teeth chattering, they wrapped themselves in towels and laughed that they’d first tubed behind Mudcat in this same spot right around sunset nearly a year earlier. Later that evening we looked back at the photos and sure enough they were right. That helped bring us full circle in a way.

That evening we celebrated crossing our wake by opening a bottle of Champagne our good friend Roberto brought to us at the beginning of the trip. The kids divided up a root beer and ginger ale. We toasted Muddy Waters for carrying us along safely and for all our family and friends who made this adventure so rich and memorable.

Next morning we dropped Jennifer at the dock and she went on an 18-mile training run. One day we’ll run her running log against Muddy Waters’ cruising log and see who has more miles. Later that morning the kids and I organized our folding bikes, loaded them in the dinghy and moved them onshore, an easy task with the new floating dinghy docks at the municipal marina. We met Jennifer and made our way to our favorite Florida Keys cafe for a healthy lunch, another full circle moment.

While waiting for weather earlier in the year, we ate here regularly. When Oma, Pappy, Sima, Doug, Eric and Amrita came to visit us in Marathon in January we took them here too. We ate lunch, browsed the bookshelves, and chatted with the owner and staff about our little family adventure. These small businesses are gems along the Loop and we’re lucky to have visited so many and met their owners. Jennifer wrote more about Food for Thought in a January 17th blog post and then again in a December 17th post.

While looking at the weather and distances carefully between Marathon and Miami, we decided we’d be wise to make as many miles as we could the following day since our weather window would probably close for a few days during the middle of the week. We’re careful not to have travel deadlines onboard since that usually leads to foolish decisions to venture out in bad weather. We did, however, hope to make Miami Beach before Santa.

Returning from lunch and hoisting the dinghy back aboard Muddy Waters, we decided to depart the Marathon mooring field in the late afternoon and anchor off of Vaca Key so we could get an early start without having to navigate the mooring field and channel in the dark during the wee hours. Once along side and in the lee of Vaca Key we dropped the hook just as the sun was setting. We secured the chain with a bridle, turned on our anchor light and watched as a half dozen large sailboats arrived and anchored nearby.

Before going to sleep, we did our engine room checks and prepped Muddy for a pre-dawn departure. Next morning, Jennifer and I were up at 0400. We raised the anchor at 0500 and then Jennifer perched herself on the bow pulpit with our handheld spotlight and lighted the way for the next 90 minutes through Hawk Channel. We counted five crab traps we avoided thanks to Jennifer’s good work. They would have been direct hits. Surely one would have snagged. That would have meant dropping the anchor until daylight and then diving to cut and clear the line and hope for no damage. We’d already had a close encounter two days earlier in the Florida Bay.

Since we couldn’t hear one another, we used a system where Jennifer would scan the water a hundred feet ahead and then shake the light quickly on a buoy if one appeared. A few times we had to make a sharp turn to one side then quickly to the other to swing the stern out and away from the buoy. We didn’t hit a one. Not that we know of anyway. After seventeen plus years of marriage, many years of sailing and a year living aboard and traveling full-time, we’re a tight team!

With winds and seas more modest than expected, we made good time as we worked our way east and then north. The kids were in the pilothouse checkin the charts regularly and wondering how close we were to Miami and what type time we were making on the water. The smooth seas eventually gave way to bigger waves and stronger winds. The forecast caught up with us. We noticed grey-purple skies ten or fifteen miles out, marking a beautiful contrast with the milky green water of this part of the Atlantic about three miles offshore. We checked the radar and saw a squall line moving north to south and about a mile offshore. Right at us. We secured everything onboard that wasn’t already locked in place.

The horizontal rain came. The seas picked-up. The wind howled. An hour outside Key Biscayne and we were experiencing some of our bounciest seas and highest winds. Our anemometer alarm continued to sound as winds whipped at a steady 30 knots, gusting above 35 knots. With Miami’s skyline in the distance, we were all in the pilothouse. Since the waves were on the nose, the motion wasn’t the sickness-inducing type. Muddy was bucking like a bull at a rodeo.

We double-checked the tides and turned toward the sometimes shallow Biscayne Channel, putting the large waves uncomfortably on our beam. No matter, the crew was so excited, I had to remind them not to disappear with the binoculars. They’d fixed their gazes on all the familiar buildings of Miami’s beautiful skyline. After twelve hours underway, we dropped our anchor in twelve feet of water not far from the Key Biscayne Yacht Club.

Protected from the strong northeast winds, we set the anchor and celebrated our return to our home cruising grounds. We watched another brilliant sunset and gave thanks for a safe arrival after a long day. The kids pointed out each landmark on the horizon, excited about the final leg of our journey. We’d anchored in this same place a few times before on Muddy Waters and reminded ourselves of what a lovely spot this will be to visit with family and friends aboard. We said our good nights and all slept a sound boat sleep, with gentle lullaby movements and sounds beneath and around us.