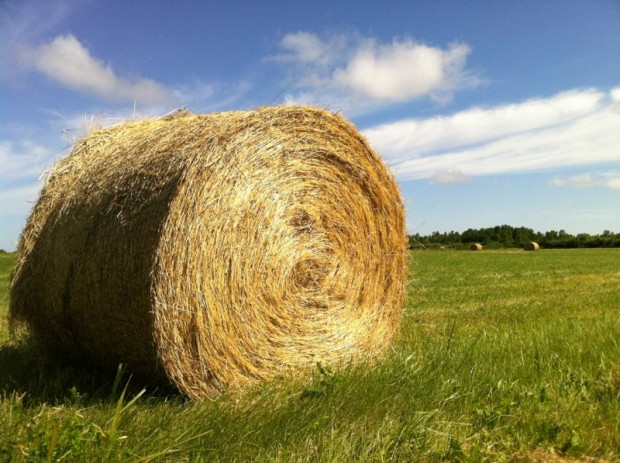 Sackets Harbor, a wonderful place to learn about the War of 1812, is also nestled in dairy-farming country in upstate New York. Here’s a six-foot hay roll Jennifer and I came across on one of our runs through country-side.

Having completed our portion of the New York State Canal System, we made our way into a settled sea on Lake Ontario, finding barely a ripple on the water. We’d of course watched the weather carefully before departing Oswego since the Great Lakes can become ferocious cauldrons, with fierce winds and wicked waves. We saw some of Lake Ontario’s fury a few days later from the safety of a harbor in the lee of a kind hill. Only 15-20 knot westerly winds easily created steep, short-period eight foot seas.

After a smooth passage, we arrived early afternoon into Navy Point Marina in Sackets Harbor, NY. Though the days are long, summer is short this far north, and the sailors are serious about getting out on the Lake when they can. And what a beautiful home base for the summer sailors and small handful of trawler owners. Navy Point Marina is a close-knit and kind community, and the local boaters were helpful with everything from lines to suggestions in town. Though we seem to say it at every turn, it’s so fulfilling to make time to meet people and listen to their stories and share your own.

Sackets Harbor itself is a quaint and compact town, nestled in dairy-farming country, with a great arts, music, theater and coffee house scene, drawing principally from the Watertown area but also attracting city slickers from farther down the state. We did it all in Sackets. Music festival, comedy show, theatre, coffee shops, live jazz, battlefield tours, long bike-rides, steel drum concerts, jogs through farm country, etc. We planned to stay just a night or two, and we stayed a full week.

Sackets has a terrific protected harbor, which made it a natural spot for a military base on Lake Ontario. Sackets is the site of a War of 1812 battlefield and was the principal naval ship-building center of the Great Lakes during that war with the British. The kids had studied the War of 1812 in their textbooks, and as with the American Revolutionary War and Yorktown, walking a battlefield from that conflict and hearing history from knowledgeable park rangers really makes it all come alive in a way a book just can’t.

Our friend Chris Cooke, whom you’ll see referenced in our Thank You post from March 12th, is originally from the area and happened to be up visiting family and friends together with his 12-year old son Spencer. One of Chris’ close friends, Michelle, lives just outside Sackets Harbor in a hundred year old farmhouse with her three sons and daughter. Chris came by Muddy Waters and offered to take Keenan and Daria over to the farmhouse with his son. The kids nearly knocked us over while rushing to jump in Chris’ truck.

Keenan and Daria have been wonderful about spending so much time with adults for the past six months on the Great Loop; but, let’s face it, it just ain’t the same as hanging out with a group of kids! At the farmhouse, the kids swam, biked, played lacrosse, and made s’mores over an open fire. They ended up spending nearly three days with their new friends, and we owe a huge thanks to Michelle for being such a gracious host for our kids. Many thanks Michelle!

We also had a terrific time with Chris himself, who gave us lots of history on the area, trucked us around town and also up to Clayton, NY for a visit to that picturesque seaside community with its world famous antique boat museum. Once again, we owe Chris a huge thanks for helping us find our boat in the first place and then for his friendship along the way. Thank you again Chris!

Our last evening in Sackets Harbor was a special one because we got to watch a spectacular 4th of July fireworks display while perched on a high hill that served as a defensive base, and eventual battlefield, during the War of 1812. Ask the kids and they’ll likely tell you Sackets was one of their very favorite stops along the way. Jennifer and I think the same.