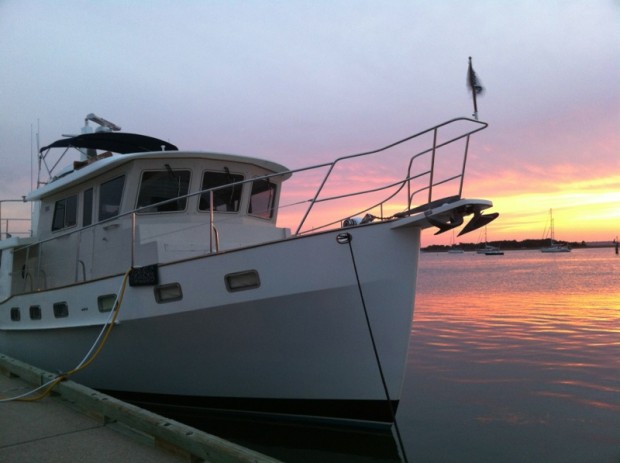 Here’s a shot of ol’ Muddy happily tied up at the municipal marina in Fernandina Beach, Florida. We saw a number of spectacular sunsets right out our window.

We’ve explored lots of Florida over the years, on four wheels, with the kids. We’re once again traveling our great state, this time on the three blades of a single propeller. Florida has more than a thousand miles of coastline, and while we’ll see Florida’s Gulf (of Mexico) coast at the end of the year, we’ve seen – at least through our portholes – nearly all of its Atlantic side already on this trip – from Key West to the St. Marys River separating Florida and Georgia. We have so many places in our own backyard we can’t wait to explore when we return from the Great Loop.

We left Florida more than a week ago, so we’ll try to recall what we can from our travel log. Beginning the story where we left off, in Jensen Beach, we traveled first to Vero Beach, which some cruisers call Velcro Beach because of the relatively magnificent municipal marina and mooring field and the proximity of places to shop, dine, and swim. We missed all that though because we had the chance to stay at the private residential dock of our friends Lawrence and Linda Reeve.

The Reeves are still in the southern Bahamas, and we look forward to visiting them when they’re back stateside. After tying up at their dock, we visited with Reeve neighbors Jean and Garland Hagen, whom we befriended in the Exumas at Cambridge Cay. The kids fetched the charts and cruising guides from Muddy Waters, and we sat for a few hours as Jean and Garland gave us the low-down on places to stop and see along the ICW. And they cautioned us on things to watch for, like the muddy bottom in Georgia and the nine foot tides! We also enjoyed a hearty and tasty dinner at a grand old diner in the heart of historic Vero.

Departing Vero Beach at day-break the following morning, we motored north to the city of Cocoa and anchored not far from the city’s charming central park. You probably know of Cocoa Beach (just east across the bridge from Cocoa) on the Space Coast, which home to many NASA and space industry employees. Astronaut and rocket scientist types. Cocoa Beach is a hopping beach area and includes all kinds of both retro and hip shops, motels, and surf shacks. We watched a space shuttle launch a few years ago from Cocoa Beach with the kids on one of our four-wheeled Florida trips. This spring’s shuttle launch is scheduled for late April so we won’t see the blast-off from up close this time.

Cocoa isn’t Cocoa Beach. Cocoa’s a quaint town with a quiet and compact historic district featuring a good number of art studios, galleries and cafes. We listened to a few artists talk about their work and generally wandered the streets. We also stumbled across a wonderful local playhouse and decided to see the opening of the 1947 Broadway musical Finian’s Rainbow, performed entirely by local volunteer actors.

Here’s the review from the following morning’s newspaper. The play was a joy to see, with outstanding acting, dance, and music. Watching the kids soak up the new experience was also rewarding for me and Jennifer. Local theater at its finest. The play delivered a positive message about community and about race relations in a humorous and poignant way.

Best of all may have been a quiet little something a fellow theater-goer said to us. We struck up a conversation with a family nearby and learned they’d traveled from Atlanta to see their niece play the leading kid role in the play. After telling them about our life aboard a boat and all, the dad told his kids that he saw his very first movie in this same theater.

He then said, in a mostly matter-of-fact way, that at the time segregation meant he had to sit in a separate section for blacks only. And here he was sitting and watching his niece in a prominent role, performing in a play with a message about race relations told in a clever and thoughtful way, in the very same venue. We talked about that simple comment, and all behind it, with the kids as we dinghied back to the boat near 11:00 pm. Then we talked about it some more. Sharing stories with strangers, and new friends, has been as enriching a part of the trip as any.

Next morning we weighed anchor early, washing down the big chunks of mud we dragged up from the bottom of the chocolate-colored water. No more Bahamas sand where you can see your anchor set in 20 feet of water and count the shells around it. In most the ICW, you can’t see even a few inches into the water because of the silt. Muck.

We passed through Merritt Island National Wildlife Refuge and saw manatee, pink flamingo, egret, heron, and lots of other wildlife along the way. We also spotted NASA’s Vehicle Assembly Building (having toured it, we call it the Space Shuttle Shack) miles and miles before getting anywhere near it. It’s huge. Bigger than huge really. It’s the largest single story building in the world and one of the largest by volume. We highly recommend a visit to the Kennedy Space Center, there’s so much history (and science and technology) there for kids and adults.

We glided into New Smyrna late afternoon, finding a slip at the municipal marina. Jennifer and the kids took a quick town tour while I wrapped-up some boat cleaning and systems checks. The next morning our close friends the Dohertys (see the photos from the Stuart to Miami album for their first visit to Muddy Waters) visited, and we walked with Michael, Anja and Matthew through historic Canal Street and attended an antique car display that surely rivals any local such show in America. No surprise given the closeness to Daytona. Keenan and Matthew (and the dads) were duly impressed by all the hot rods. Jennifer accompanied Daria to a local art studio, where the store owner/artist gave Daria a two-hour class in metal-work jewelry making.

Next day, Michael and Matthew joined us for the 70-statute-mile journey to the historic city of St. Augustine. What a special opportunity to have Michael, whom I’ve known for all of my nearly 43 years, and his son Matthew join us. You might recall that Michael (who also has a U.S. Coast Guard captain’s license) helped us deliver the boat from Stuart to Miami last November). Michael and Matthew have logged the most miles of any of our guests!

St. Augustine, founded in 1565, is a place we know well, having traveled there on family trips and school field trips. The city’s a wonderful place to study American and Florida history. We saw the sites and enjoyed learning even more about Henry Flagler (see our Jan. 29 blog post for more on Flagler). St. Augustine is also a city friendly to cruisers, with a first class municipal marina and mooring field. Based on a friend’s recommendation, we chose to stay up the San Sebastian River in a quiet part of town at a marina called River’s Edge Marina and rode our bikes into town.

We next traveled to Fernandina Beach, the northernmost coastal town in Florida. Fernandina has had more than a half dozen flags flown over the city (some more than once), including Spanish, French, British, American, Confederate, and Mexican (you read that correctly). The cruising guides undersell this charming town, nestled between two paper mills, and located on the northern end of the more well-known Amelia Island.

We again stayed at the city docks, stepping right off the boat into one of the prettiest towns we’ve been to in Florida. As has become our way, we chatted up some locals, listened to some interesting stories, and learned lots more about the town. We met an author, an artist, a park ranger, and a harbor pilot. We found a real-deal pizza place for dinner one evening and then attended a local blues jam session above a beer brewery. We’ll write more soon about music onboard Muddy Waters but will note here that Keenan has been playing bass guitar lots lately and really enjoyed listening to the music. And live blues in any venue is always…music to the captain’s ears.

While in Fernandina we also rode our bikes past town to Fort Clinch State Park and toured the grounds, museum, and fort. Lots of history, and a great field trip for the kids (and parents). Plus nearly ten miles of biking to help satisfy the day’s P.E. requirements!

We also got a head start on our cruising in Georgia by traveling ahead in our dinghy about five miles north to Cumberland Island and then over to the town of St. Marys, also in Georgia. We’ll leave those two places for a Georgia post. Cruising Florida was fun and educational for all of us, and knowing so many places are so accessible by water makes us eager to explore even more in Florida.