Home Side Trip to Chattanooga

Side Trip to Chattanooga 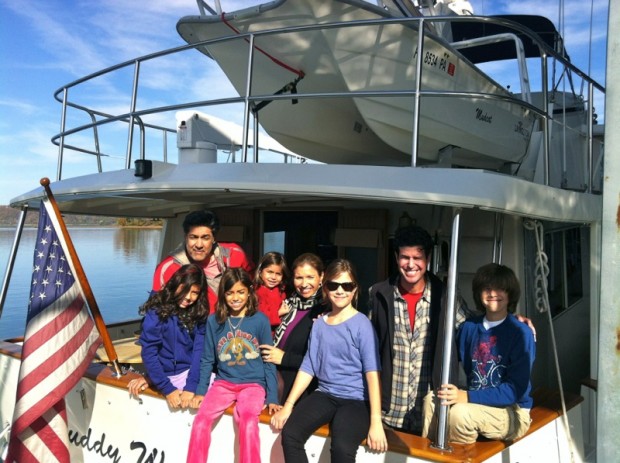 We had lots of Jennifer’s family visit Muddy Waters in Chattanooga, and the kids were happy to have more cousins onboard. Here’s a shot on Chickamauga Lake with Jennifer’s sister Gillian, husband Jay and their three daughters – Malena, Angali and Giselle.

Our next river run would be a Great Loop side trip to Chattanooga, Tennessee, about 250 miles upriver on the Tennessee. We motored five days in a row, passing through four locks, including one of the highest on the east coast at 100 feet. First overnight stop for us was at the municipal marina in Florence, Alabama, where we arrived together with cruisers Salty Paws and Ookpik. We landed early enough to take a bike ride around town, finding a terrific organic grocer, a fine cupcake shop, and a well-preserved historic main street.

We also rode about a mile outside downtown to visit the birthplace of W.C. Handy, one of the early blues songwriters and composers and someone generally credited with taking the blues to a national audience. The captain was very pleased to get a chance to learn more about his favorite art form.

Next day we decided to run later into the evening, arriving at Ditto Landing Marina near Huntsville, Alabama on a cool and rainy night. Fortunately, a few helpful Loopers, including our friend Mike on NautiNell, were on the docks to help grab our lines. It’s always a pleasure to see a familiar face on the docks. Next day was much shorter and we arrived at Goose Pond Colony, Alabama on a cool afternoon that gave way to sub-freezing night time temperatures. The following morning Jennifer bundled up good and went for a 17-mile run in the surrounding hills. Keenan, Daria and I had everything set, and as soon as we saw Jennifer approach, we fired up the engine and readied to throw off the lines.

We arrived at the Nickajack Lake late afternoon and tied up for the night at the Hales Bar Marina on the lake. We awoke to dense fog but knew that meant clear skies above. Once the fog burned off, we began our journey up what’s called the Grand Canyon of Tennessee, a spectacular river valley, with a public trust dedicated to its preservation. This last leg to the Chattanooga area was one of our prettiest days of cruising. The fall colors were spectacular, the rolling hills and occasional bluffs along the river all dramatic. By late afternoon we’d arrived at Chattanooga’s lovely waterfront. We continued on, through one more lock, and made our way to Island Cove Marina on Chickamauga Lake.

Our friends the Parkers greeted us at the docks and took us on a tour of the area and then into town for pizza. The following day, Halloween, the Parkers picked us up and took us on a behind-the-scenes tour of the terrific Tennessee Aquarium, surely one of America’s finest aquariums. It’s the largest fresh water aquarium in the world and that part of the center is focused on the river journey from the Appalachians to the Gulf of Mexico. The aquarium also has an impressive salt water section, and we enjoyed seeing sea creatures more familiar to us in Miami as well as exotic sea life from across the world. Jeff and Susie are long-time Tennessee Aquarium board members, docents and volunteer Scuba divers. When I say we got the aquarium tour of a lifetime, I’m not kidding. We all learned so much and got to do it in great company. Thank you Parkers.

Later that afternoon we all met Jennifer’s sister Ann and her boyfriend Derek who drove up from Georgia to visit us aboard Muddy Waters. By the time we got back to the boat from dinner, it seemed too late to drive to a neighborhood for trick-or-treating. The kids quickly noted it was the worst Halloween. Ever. We’d mistakenly assumed it was all about the candy, but we realized after it was too late that only 90% was about the candy and the other 10% was about putting on a costume and knocking on doors. Keenan had planned to be a rock musician, carrying around his bass and wearing his shades and slick hat, and Daria still put on her own homemade costume and wore it until bedtime. Poor parent planning…

Lucky for the kids Ann brought along a box of tasty chocolate cookies with orange filling, so Keenan and Daria polished off those baked goods without a word from us. Ann also brought along her parents’ dog and her own dog. Since the inn at the marina didn’t allow pets, we kept the canines onboard and enjoyed the extra eight legs of company. We had lots of fun catching-up with Ann and Derek the following day too and were sad to see them depart, especially after they treated us to lunch in downtown Chattanooga. Thanks Ann and Derek.

The following afternoon the Parkers picked us up in their 21-foot lake boat and drove us back about seven or eight miles to their beautiful lake-side home. We had a great afternoon visiting and talking about possible future adventures together – maybe even an environmental volunteer project in southern Chile. The Parkers also kindly lent us their car for the rest of the week, terrific for us since our marina was about ten miles from town. A short hop for endurance athletes like Jennifer, but a bit of a hike for mere mortals like the rest of us.

We toured the Hunter Museum of American Art, a beautiful and accessible collection of traditional and mixed-media art and furniture housed in three unique side-by-side homes on a bluff overlooking the Tennessee. We then walked nearly all of downtown Chattanooga, both the south side and north side of the river. The following day Jennifer’s parents and niece Giselle arrived and Jennifer prepared a terrific vegetarian meal onboard to welcome our guests.

The next morning we all drove to the top of Lookout Mountain and toured the area where the Battle above the Clouds was fought. We watched a demonstration from the volunteer rangers, who were in Union uniforms, on how the signal corps operated at the time. We were impressed by the sophistication of battlefield communications in the 1860s. The signal corps, with flags alone, could transmit a message from Chattanooga to Knoxville – more than a hundred miles – in about two hours.

We also learned that the telegraph was vital in more strategic communications in the Civil War. While Samuel Morse had invented the single-wire telegraph in the 1830’s and Alfred Vail had developed a method to transmit textual messages (the forerunner to today’s International Morse Code), Union and Confederate officers needed a method to encrypt their messages. The park rangers demonstrated the use of a code wheel and had the kids work with them on decoding various flag signals. The park rangers also explained, to our surprise, that President Lincoln would sometimes get same-day battlefield reports in Washington by telegraph.

All the Civil War battlefield parks we’ve visited have been expertly maintained, with superb staff and volunteers on hand to answer questions and give excellent history. Back on the east coast, we’d purchased a collection of essays called the Civil War Remembered, commissioned by the National Park Service. We’d read the book together with the kids, and seeing these places in person and walking the battlefields this year has helped bring us closer to all that this war that started 150 years ago meant and means to America.

After descending Lookout Mountain we walked Chattanooga with Jennifer’s parents and niece Giselle. Later in the afternoon Jennifer’s sister Gillian and husband Jay arrived with their other two daughters, Malena and Angali. Daria was thrilled again to have three girl cousins onboard. They all bombarded Keenan with pillows and punches until he joined in the fun too. Jennifer prepared another homemade feast aboard Muddy Waters for all. We also enjoyed showing off our little waterfront home to Jay and Gillian and catching-up with them, their kids and with Jennifer’s parents.

The following morning we all traveled back to downtown Chattanooga to join the festivities at the Head of the Hooch, the second largest rowing regatta in America (after the Head of the Charles in Cambridge, Massachusetts). We enjoyed watching the nearly 10,000 competitors from high school through masters levels race their sleek shells on the three-mile course down the Tennessee River.

We enjoyed lunch in town with everyone and then said farewell. We were happy to have made the trip farther up the Tennessee River to see Chattanooga, and we had good fun visiting with friends and family. Thank you to the Singhs, all the Sherbournes and Derek for driving from Georgia to visit us on our little family adventure. We look forward to seeing Jennifer’s parents, and Ann and Derek, when they visit us in Miami for Christmas.

The Parkers, who are long-time supporters of the Chattanooga community have made a special effort to make the city cruiser friendly. They’ve done a magnificent job. The downtown marina, with floating docks and newly installed security gates, is at the doorstep of the wealth of activities in Chattanooga. We, and other Loopers, owe the Parkers a big thanks for their leadership in the community and on behalf of boaters. And we want to send them a special thanks for the friendship and for the good laughs we always have together.

The trip farther up the Tennessee River shouldn’t be considered a side trip on the Great Loop, it really should be a regular part of the trip for cruisers exploring the river system. The trip up the Tennessee is beautiful, especially in the fall. Cruisers can travel as far as Knoxville. Florence, Joe Wheeler Park, Decatur and Huntsville were great stops in Alabama. And Chattanooga is a terrific town, voted recently as best place to live by Outside magazine. Nature, outdoor sports, museums, history, art, music, shops, and easy access to it all. Hang on, the article didn’t mention that boaters can snug-up their trawlers and sailboats right at the foot of downtown. Maybe in next year’s edition.