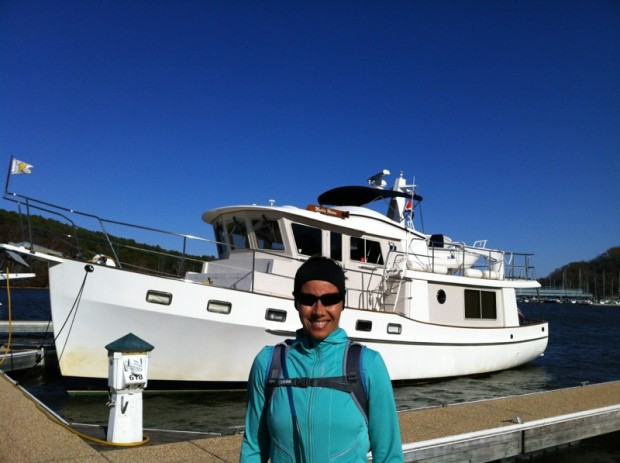 Standing in front of Muddy Waters, Jennifer bundled up on a cool and windy afternoon, ready to hit the trails for one of her long training runs.

Thanks to some informative museum materials our friends the Parkers gave us a few weeks earlier, we learned lots about the Tenn-Tom before even setting sail on its calm waters and long straightaways. The Tennessee-Tombigbee Waterway, better known as the Tenn-Tom, is the manmade waterway that connects the Tennessee River to the Tombigbee River. It’s the largest project in the history of the U.S. Army Corps of Engineers. The Tenn-Tom is five times longer than the Panama Canal and required moving one third more earth. This is also the waterway NASA uses when it transports Delta rockets from Decatur, Alabama to the Kennedy Space Center in Florida.

Two of our favorite facts about all these navigable waterways: (i) an average eight barge tow can move as much freight as 120 rail cars or 480 tractor trailer trucks; and (ii) a barge can move a ton of freight twice as far as a train and six times as far as a tractor trailer truck on the same amount of fuel. Sure makes it sound like the old-fashioned method of moving things up and down the river is more environmentally friendly, by far, than most other modern forms of transportation.

With these interesting facts sparking a lively discussion onboard, we set-off down the Tenn-Tom and made it by late afternoon to Midway Marina in Fulton, Mississippi. Once we connected to the marina’s power supply, the voltmeter on our electrical panel began showing major power fluctuations. Our chief engineer, Keenan, noticed the issue, diagnosed the problem and made the recommendation we disconnect after tracking the numbers for a while. Not your typical 7th grade homework. We wisely followed his suggestion and disconnected the shore power and planned on using our generator to recharge our batteries.

With that small issue resolved, Jennifer went for a long training run, and the kids and I hiked on a wooded trail over to the James Whitten Historical Center just above the lock and dam with the same name. Unfortunately, the center was closed. Just looking in the windows we could see it was a modern museum filled with interesting artifacts and exhibits. Though disappointed at not seeing the museum, we still enjoyed the hike along the river and got in some footraces to boot. I think I was about Keenan’s age when I could first beat my dad in a footrace (he ran track in college), and I think Keenan can now outrun me. In Crocs no less.

Next morning we were off, together with four other boats, headed toward Columbus, Mississippi, home of famous American playwright Tennessee Williams. There we caught up with the Fallons again and spent the remaining daylight hours throwing the frisbee and catching up on the few weeks since we’d last seen them. We had dinner onboard and the kids played a half dozen or so rounds of Bananagrams. They can’t get enough of this game. Though the Fallons were sticking around since Andrew was traveling for work (yes, he works full time and lives aboard and travels with his family), we looked at the weather and where we wanted to reach over the next few days and decided to push off in the morning.

After a long day on the water, we decided to bypass an anchorage in an oxbow lake just below a lock and push on all the way to Demopolis, Alabama, a hundred mile day. Two hours for you by car and nearly twelve hours for us by boat… Once the Tenn-Tom ends and the Tombigbee River begins the straightaways are finished. Now it’s all bends and turns like a badly coiled garden hose.

Running at night, we saw a tow ahead on our AIS and called him as we approached about overtaking. (Tows run at about 6 mph and we usually run at about 8.5 or 9 mph.) This tow captain recommended we pass in a certain spot and then, to our surprise, he pushed his six barges up on the right descending bank allowing us to pass. If that wasn’t kind enough, he then shined his two powerful spotlights on either side of the river for us ahead for the next mile. It was like a scene from a science fiction movie. We called the Green Wave’s captain and thanked him for helping show us the way.

We arrived into the Demopolis Yacht Basin around 8 pm and were directed to the brand new basin, which is as yet unlit and doesn’t appear on any charts or even satellite photos of the area. We couldn’t see much, but we spotted the entrance on the radar, and then lo’ and behold for the second time in the evening, a stream of light illuminated the way. Turns out the gentleman on duty drove his truck around to the new marina basin and shined his headlights on the marina entrance for us. Just another fine example of the kindness and resourcefulness of people on and around the water.

Having run hard for a few days in a row, we decided to stick around Demopolis the following day. Before long, a couple we’d met briefly in Luka, Mississippi and cruised with for a day pulled into the slip next to ours. Turns out Ashley is the yacht captain for an NFL defensive superstar, and he was delivering the player’s beautiful blue yacht to Florida for the winter. Ashley’s first mate and girlfriend Lili was onboard lassoing lock bollards all day and doing all the line work at the docks. We all said hello again, and Ash endeared himself to the kids for a long time to come by teaching them to cleat a line while standing. It was like a rodeo, with the kids practicing their technique until they got it right.

Later that evening Ash and Lili came aboard Muddy Waters for one of Jennifer’s gourmet vegetarian feasts. Check Jennifer’s food blog, linked above, for recipe for the Fesenjun she cooked up that evening. At Jennifer’s request, Ashley and Lili brought along their juicer, and we whipped up some mighty fine fresh juices to accompany dinner. Jennifer’s already itching to purchase one for Muddy Waters. More ballast I guess. We had good fun chatting with our new friends, especially since Ashley and Lili also live in Miami. We promised to catch-up when we’re all back at our home port.

After a day of rest, homeschooling, regular boat maintenance and visiting with neighbors, we decided to head out before sunrise the next morning to make the long run to Bobby’s Fish Camp in Silas, Alabama. Bobby’s is known to have the best fried catfish in Alabama, but unfortunately the restaurant was closed the evening we arrived. We shared the dock that evening with a lovely Canadian couple aboard a 50-foot Hunter sailboat named Adrianna I. After chatting with them after supper, we decided to buddy boat and travel together the following day. That’s helpful when passing through locks and also provides an extra set of eyes for tows and tricky spots.

Departing around 0600, we entered our final lock on the Great Loop. Keenan, who’s been updating the map on our blog, has been keeping close count of the number of locks. We’ve been through 115 locks. The kids do most the work in the locks and they were excited to be done. We promised a celebration at 100 locks, but we forgot by the time we got to it somewhere on the Tennessee River. Passing through our last lock on the trip and knowing we wanted to celebrate and reward them for their hard work, the kids asked for…a root beer by Maine Root. It’s amazing how simple things become on the water. We love it. Root beer for all.

That day we ran nearly a hundred miles with Adrianna I, and we turned west into a small bayou at mile 16.6 on the Mobile River about thirty minutes before sunset. In the creek we saw another sailboat we’d met on the Erie Canal. Using bow and stern anchors, we all settled in and admired the beauty of the pristine surroundings. We stepped outside to see the stars, and we swept the shoreline with our spot lights to see wildlife on the bayou banks. Though the temperature dipped to near freezing, it was another peaceful and beautiful evening at anchor.

The next morning we were up early, but we waited until the sun was up to weigh anchor and head south. By late morning we were in the industrial section of the Mobile River, approaching Mobile itself. Working our way out into Mobile Bay through the shipping channel, we dodged a few massive ocean tankers and then turned east and proceeded across the bay to Eastern Shore Marina in Fairhope, Alabama. Though this is an estuary (like the Chesapeake and the lower Hudson River) and the water brackish, we soaked up the familiar smell of salt air and enjoyed seeing the expanse of water around us.

Once at the marina, we strolled the grounds, happy to see the familiar wooden fixed docks and pilings, sailboats, pelicans and seagulls. So familiar and warm. Later we borrowed the marina car and drove to a local organic grocery store and re-stocked our supplies of fresh produce and other healthy eats. Ready to explore town a bit more and maybe even treat the Muddy Waters chef to a night off, we realized we had to return the courtesy car to the marina so the next set of boaters could visit town.

The following morning the local Great Loop harbor hosts (volunteers who offer advice and support to other Loopers) stopped by to say hello. The Riggs gave us some great tips on marinas and anchorages along Florida’s Panhandle and also gave the kids a little history lesson on the area. What gracious and kind harbor hosts.

Later that day we rode our bikes a few miles into Fairhope’s charming downtown area, touring the lovely historic homes in the area. Fairhope is one of the prettiest communities we’ve seen on the Loop. We also peeked into all types of shops and cafes on main street and finally spelled our personal chef and had lunch in town.

We found a terrific book store called Page & Pallette where the manager gave the kids lots of books and recommended others that we purchased. Good thing we have baskets on our bikes because nearly a dozen books can get heavy. As usual, we spent a few hours in a town bookshop and met and chatted with other avid readers and then with others still who overheard us tell our story (and these days it’s the kids telling the story) about living aboard and traveling as a family.