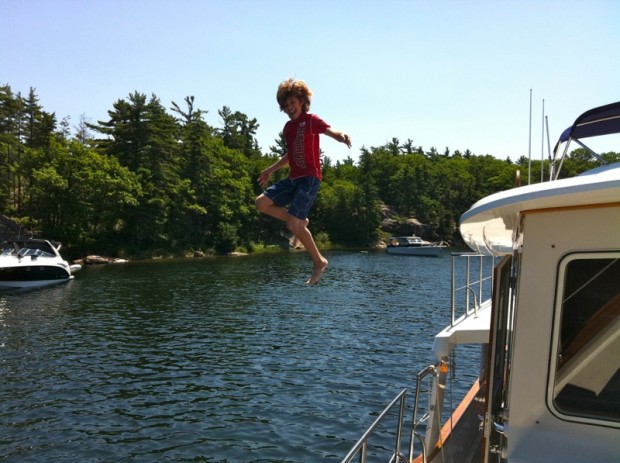 Here’s Keenan catching some air by jumping from the top of the wheelhouse. We anchored out for a few days in Frying Pan Bay on Beausoleil Island, a beautiful national park in Canada’s Georgian Bay.

After a day in Midland, we were all set to explore and find a protected cove surrounded by pines and the imposing boulders of the Canadian Shield. But the weather wasn’t cooperating. The forecast was for big wind and thunderstorms. We decided to head north for Honey Harbor and a protected marina called South Bay Cove. They were running a special and welcoming Loopers. What a terrific marina and staff. We met lots of local boaters, plus other Loopers, and got some good tips on favorite anchorages along the way in the Georgian Bay.

The next morning the clouds cleared and we pushed off and traveled all of five miles to a beautiful anchorage called Frying Pan Bay on the northern tip of the national park that encompasses all of Beausoleil Island. Though a few boats were med-moored, we were the first boat to anchor in traditional style and we had our pick of places to drop the hook in twenty feet of water with a clay bottom. Lucky us because within a few hours, more than twenty boats squeezed into this fairly small area.

Early the next morning, we spotted a medium-sized black bear poking around at the water’s edge, presumably looking for something to eat. Hmmm. We tried to remember what to do if we encountered a black bear on the trail. Is it play dead? Or is that for a grizzly or brown bear? All bears swim, run and climb, so those options are out for a quick getaway. I guess only circus bears bike, but we wouldn’t get far on the rugged terrain on wheels anyway. We eventually found a park ranger who told us the best approach is not to run or turn away. Instead stand your ground, yell and make noise. My favorite bit of advice was to look at the bear directly…but not in its eyes. Show you’re confident but not aggressive. Hope you can make that distinction when Mr. Not-So-Cuddly Bear is staring at you down the path!

Bear or not, Jennifer needs to satisfy her insatiable appetite for running, biking, swimming, hiking, climbing or general adventuring. So we needed to figure out something. Jennifer did decide she wouldn’t run alone on the island. Of course, trail-running with me works well for her because she doesn’t need to be faster than the bear…only faster than her husband! Jennifer and I did take out our stand-up paddle-boards just after sunrise each morning, making our way to some beautiful stone islands nearby.

We also met the two couples (one of whom had a 12 year old son) in the boat anchored directly behind us, and they invited to go on a hike on the island with them. We love those type invitations from locals. Both couples worked in the field of science, and they pointed out the poison ivy all along the trail and also poked around for signs of the one local venomous snake, the Massasauga Rattler. When we hear a rattling sound in one of our favorite national parks like the Everglades we usually do a 180 and quickly tip-toe away. These aren’t the droids you’re looking for Snake Troopers. Yet, these scientists were seemingly inviting a close encounter. Bold and impressive. Guess that’s why we didn’t become science teachers.

Once we returned, Keenan, Daria and Tyler spent the next few hours jumping into the water from the top of Muddy Waters, paddle boarding, and having a grand ol’ time. Everyone came over for coffee in the evening, and we shared a little bit about our adventure and learned about their backgrounds and interests. Such fun and fulfilling chats. Like reading a good short story or book. Next morning they were all off to another remote anchorage on their own weekend water journey.

With our new acquaintances gone, we took a dinghy ride around Beausoleil Island to the visitor center and went on a nice hike with beautiful views of the island’s various bays. After some good exercise on the hike, we found a shady spot for a gourmet picnic lunch Jennifer had prepared. In case you can’t tell from Jennifer’s food blog, we are like a traveling gourmet cafe. Food isn’t just sustenance aboard Muddy Waters, it’s an art. And Jennifer does it all with an eye toward high output, active days. What a lucky crew!

Returning to Muddy Waters from our picnic, we found more boats had squeezed into the small anchorage. We could hear lots of kids’ voices on the other boats, so Keenan and Daria went exploring for friends on the paddle boards. Sure enough they met some kids their age on another nearby boat. And before long the parents on yet another boat headed over and invited the kids to dinghy over to some rocks high above the water where local kids come to catch some air before plunging into the deep and fairly warm fresh water. We all went over to the small cliff and watched the collection of Stand By Me look-alikes take the plunge. We ended the evening with a cook-out next to the couple’s boat and enjoyed another evening of sharing stories and making new friends.

The following day we had nearly a dozen kids jumping from Muddy Waters’ pilothouse roof. Somehow I don’t think this is what naval architect Kurt Krogen, Sr. had in mind when he designed our vessel! We’re certainly taking full advantage of this amazing vessel. Though we sometimes miss sailing, we so appreciate the space and sea-worthy aspects of our trawler. Heck, we could probably carry along our small Com-Pac sailboat next to Mudcat if we’d rearranged things up top. Krogens can do it all. Since we were anchored in the center of Frying Pan Bay and were the largest vessel there to boot, the kids all had an audience for their aerial acrobatics. They all hammed it up.

Next question was how to feed all the river rats! No worries, we have the inimitable Chez Jennifer onboard with two able su chefs. Keenan decided on the famous American dessert – whose beginnings trace to either Maine or Pennsylvania, depending on whom you believe – yes, the delicious whoopie pie. We gathered the dirty dozen on the flybridge and handed out these home-baked treats, two apiece. Good stuff. With chocolate crumbs everywhere, they were off again to entertain the other boaters with their sugar-boosted flips and occasional flops.

We spent the following day, a Canadian holiday, doing more of the same. Swimming, hiking, paddling, kayaking and BBQ-ing with our new friends aboard their boat Firkin. They finally had to depart the Georgian Bay to head back to Toronto and return to school and work. We left with fond memories of Frying Pan Bay and its natural beauty and warm sense of instant, if temporary, community. Best of all was making so many new friends, learning lots about the area and seeing the kids soak up the adventure.