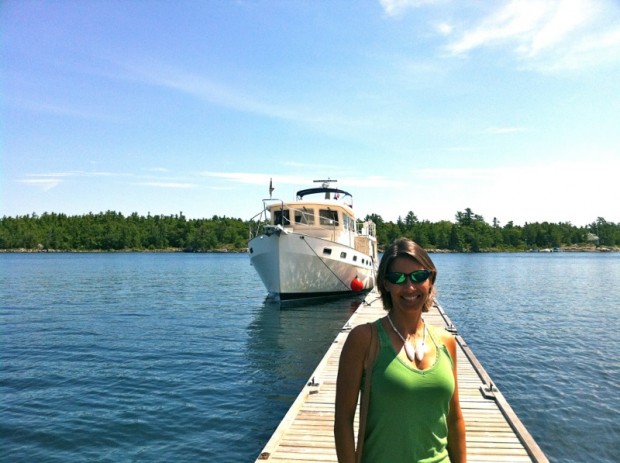 Here’s a shot of Muddy Waters and the Admiral when we pulled up for lunch at Henry’s Famous Fish Restaurant in the Georgian Bay. We arrived early, and before long the docks were full of fishing boats, yachts and…sea planes!

We weighed anchor at daybreak from Beausoleil Island, waking a few nearby boaters as we cranked our windlass and retrieved our 70 lbs. Bruce anchor. We had to lock-down our 3/8 chain and drive past the hook briefly to free it from the bottom and then it was ups-a-daisy no problem. We washed off the mud and realized we had a small audience, probably amused by our display of anchoring hand signals. We watched a number of boats anchor over the weekend with a small committee on the bow, debating each step. We like to keep it simple. No third base coach baseball signals, just a few simple hand signals like forward, reverse, port, starboard, and the twirling finger letting the helmsman know the hook is up and to drive out of the anchorage.

Our only distraction was the deliciously smokey smell of early morning grilling. Summer boaters love to BBQ, and in these Canadian waters that means breakfast, lunch and dinner. A few boaters were already up grilling their breakfast meats at sunrise. Ummm good. Even the vegetarians aboard Muddy Waters noted how good it all smelled. And no wonder we twice saw a bear sniffing around the edge of the anchorage.

We followed the small craft channel toward the northeast, winding around hundreds of small islands. Most the islands here are privately owned and the island terrain is dotted with summer cottages. This is no place for auto-pilot. In fact, this is no place for figuring out your course the morning of travel. The landscape is so beautifully similar here, it’s easy to miss channel entrances and turns and confuse beacons. At times it’s necessary to post someone on the bow with polarized sunglasses to point out the boulders lurking just beneath the surface.

Jennifer’s been saying since we started the trip that it would be neat to stop at one of the many seaside cafes we pass, tie-up, have lunch, and then keep going. Well, we were in luck. Just around eatin’ time, we were approaching Henry’s Famous Fish Restaurant. We tied-up at the deep-water dock and then watched a series of even larger boats follow us in. Then, the buzz of a couple of sea planes landing. Next thing you know, the sea planes are tying up to the dock. Good thing we arrived a little before noon, because by the time we sat down to eat, the docks were full up. Jennifer and I tried the famous caught-that-morning Pickerel fish-n-chips.

An hour later and we were back on the road, carefully navigating our way up to Parry Sound and then on in to Big Sound Marina. Next morning it blew link stink (we’ve wanted to use that sailor’s expression for a while now; it means it was really really windy). It also rained and turned cold. While the kids plowed through some homeschooling assignments, Jennifer and I donned our foul weather gear and headed to town to re-provision. That might sound like a common theme. And it is. When you live aboard and have a vegetarian running the galley, you gotta’ get a lot of fresh produce and fruit. Often. Lucky for us, we found a terrific organic grocer.

Jennifer and the kids wandered town when the weather cleared, and they found a terrific little book store. Both kids returned with a bag full of books. While the kids dived into their new books, Jennifer and I jogged a beautiful trail along the Parry Sound. I quit early to buy tickets for the four of us for an evening show at the local performing arts center. I’m not making excuses…but quitting early, relative to Jennifer, isn’t always THAT early.

An avid triathlete and adventure racer, she’s done multi-day mountain marathons, high altitude races, jungle runs, you name it. She’s already plotting out her training schedule for a week-long jungle race in Costa Rica scheduled for January 2012. She completed a week-long race there two years ago in the southwestern part of the country. This one’s in northwestern Costa Rica, and she’s heading to Central America this time with her girlfriend Florencia, like Jennifer an Ironman Brasil top-ten age group finisher.

While Jennifer was getting in some extra hill training, I picked-up tickets to a Festival of the Sound performance scheduled for that evening. We listened to three magical Beethoven pieces written for string quartet performed by the New Zealand String Quartet, the Lafayette String Quartet and the Penderecki String Quartet. Through sheer luck, the only tickets available happened to be the four center seats in the first row of this 1000+ beautifully built performing arts center.

We were about six feet from the musicians. Watching the kids absorb the music – especially the communication between musicians and the incredible expressiveness in their playing – was richly rewarding. We even were able to meet a few of the musicians after the show, and each asked about our life aboard. We in turn asked for the best advice for a budding musician or dancer. The kids heard two clear messages – practice every day and stay passionate about the art itself.

Next morning we shoved off and departed the small craft channel and headed for the open Georgian Bay, trying to make some miles. We traveled for nearly ten hours, and the last few hours the wind really kicked-up. With an earlier charting tip from our friends on Rock Chalk and Crawdad, we found a beautiful and protected anchorage tucked away in the Bustards Islands and dropped the hook.

We owe a special thanks to our friends and fellow Loopers Jim and Gloria aboard Crawdad because they’re a few days ahead of us and they’ve given us daily updates on places to go and things to watch for. Thank you Gloria and Jim for the helpful hints along the way and for the friendship too. We look forward to catching-up to Crawdad one of these days, maybe on the eastern side of Lake Michigan.

Nestled in between a few other sailboats and trawlers, we had dinner on the foredeck, talked about how lucky we are to cruise such pristine wilderness. Then somewhere around 9 p.m. we watched the sun set and send a breath-taking range of colors into the streaks of clouds on the horizon and through the pines on the ruggedly sculpted islands.