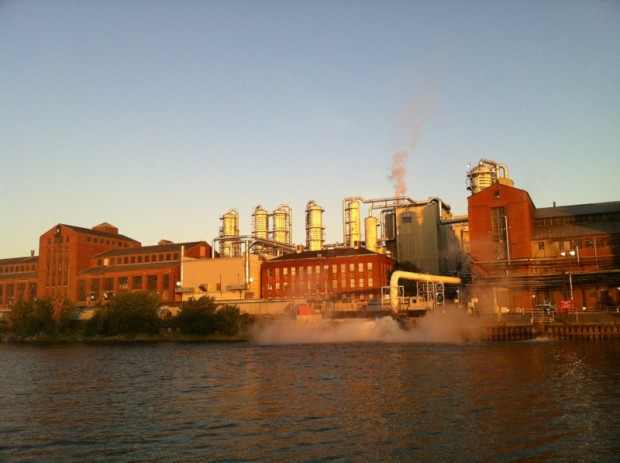 The industrial landscape along the Illinois River reminds you that these rivers and canals (some natural, some man-made) were America’s earliest highways. And they continue to be major arteries for transporting raw materials across the country.

We got out of Dodge just in time. We had a short run of about ten miles in Lake Michigan from Chicago to Calumet, where we entered the Calumet-Saganashkee Channel and then the Chicago Sanitary and Ship Canal (yes, that’s the name) on the way to the Illinois River. We knew a powerful weather system was fast approaching, with the first line of squalls forecast to hit in the afternoon.

Winds were already a steady 15 knots, gusting above 20 knots; but without much fetch for the waves to build, we didn’t have much wave action. As we made our way out onto the lake and headed south, we heard a U.S. Coast Guard weather alert on the marine radio informing mariners that winds on Lake Michigan could gust to 65 knots and waves could reach – not making this up – 33 feet. Holy high lake waves Batman! Keenan asked if we could stick around somewhere close enough to watch the waves on the lake. Uh, negative, cowboy.

As we rounded the corner into Calumet Harbor (briefly entering Indiana waters) and the inland waterway, we immediately heard lots of tug traffic on the VHF. A low bascule bridge was stuck in the down position and the tow captains were concerned about getting their loads out of the channel and across the lower lake before the big winds arrived. You don’t want to be an itty-bitty pleasure craft like us in the midst of a sea of workboats trying to make miles. Whatever needed a fixin’ got fixed and the bridge tender stopped car traffic, raised the bridge, and it was off to the races. At about 8 mph, we reckon it was like row-boat races to onlookers.

The waterway here is industrial. No sightseeing boats pass through these parts, this is all business. It’s where stuff is made and transported. The waterway displays a sort of industrial art along its shoreline, a bustling city of canal machines for milling, loading and moving. The tow captains here know these waters well, and you hear them refer to moving certain knuckles of barges around tight bends. Barge loads three wide and five long are common on these waters that sometimes seem to have only scraping room on either bank. The captains and pilots are the real deal, the flying aces of the waterway. They’re geometry whizzes, calculating angles on paper and in their heads, not for grades but for safe passages for their crews and cargo.

After a long day on the water dodging tow traffic, we tied-up to a quiet park wall on the Joliet waterfront. (The same Joliet from Kansas Joe McCoy’s oft-recorded blues song Joliet Bound.) The guide books suggest leaving-on an anchor light so the tows, which run 24/7, don’t scrape you off the side of the river in the middle of the night, can-opener-like. Other than a few 30 knot gusts from the same storm pounding Lake Michigan, we had an uneventful night. We also got a chance to meet in person the lovely couple – Gary and Lori – we’d traveled with through a lock (tied to a barge full of sand) and along the waterway that day. Gary and Lori live aboard their 50 foot sailboat Tessa, traveling south and working in Florida in the winters and then heading back north via the east coast. They’ve completed the Great Loop a couple times already and know the waterway well.

The next day we motored south and west. We passed and overtook a few tugs along the way. We always make radio contact and find out the safest place to be relative to these massive vessels. One tow with a nine-barge load suggested we pass at a certain spot on the river, which was fairly narrow on this long stretch. Jennifer was at the helm and working around the tow on its starboard side (one whistle in tow talk) as the captain indicated. Abreast of the tow itself, we could see the water disappearing from the river bank. The tow and barges ahead of it were displacing so much water they were literally sucking water down from the banks. Bad news for Muddy Waters.

We could feel our boat being pulled toward the barges, and at the same time we could feel our keel skimming the muddy bottom which had risen to greet us. During thrusts of forward and reverse to keep us from getting sucked into the barges, we radioed the tow captain letting him know our status. Next thing we know, we’re clearly stuck in the muck. Good thing too. The tow, moving at about 6 mph, motored on by. The water returned and the tow’s powerful propeller wash helped free us from the muck, all at once. Lucky us. The captain radioed us and said that there must have been major shoaling in that area recently. We stayed behind him for another two miles until we got to a very wiiiiiiiiide spot.

Though our hearts were still pounding two miles later, everyone had been calm through our little adventure. All hands were on deck and bracing for a collision with the tow. The kids had asked about putting down fenders, but we all opted for them to brace themselves rather than worry about the fiberglass. Safety first. The water teaches lessons every day. We’ve had a number of classes with Professor H20 and some tough tests. We’re certain to have more.

Another lesson we’ve learned on the water is how kind and helpful boaters are to other boaters. Thanks to a helpful tip from a local dock master named Captain Mo we found a beautiful anchorage just downriver from Sheehan Island. Oddly enough, this most industrial of waterways had one of the prettiest inland waterway anchorages we’ve found. Under a beautiful park bluff, with the disappearing sun’s autumn rays sparkling just above the hills, the Muddy Waters and Tessa crews were treated to a beautiful scene of fall colors in the trees, steep white cliffs, and water still like a pond.

At sunrise the following morning, we weighed anchor in near-freezing temperatures and made for the city of Peoria. All four of us were up in the dark as we fired-up the generator and turned on the heat to take the chill out of the inside air. Knowing it might be fuh-reezing in the wee hours, we did our engine room checks the evening before (oil on the main and genset, belts, water intakes, general look around, etc.). With our main up and running, Keenan took the helm while I raised the anchor, and Daria helped undo our anchor bridle and stow the lines. Not everyone’s school-day morning cup of tea for their kids – but it sure is ours. And we love seeing not only their comfort at handling their tasks but their ability to adapt and make decisions on their own along the way.

In Peoria, we tied-up at the foot of the town, on the free city dock – empty since the summer season’s over. Peoria is home to Caterpillar Inc.’s worldwide headquarters. We thought about leaving a thank you note on the door because CAT made one fine machine in the 3208. No frills, all muscle and reliability – just what a crew like us needs. We enjoyed a quick stroll around the quiet streets and found a cool cafe, full of Butler University students.

Pushing off the next day we figured we’d have a few good anchoring options in the evening. Turns out the river levels were lower than normal given we’re late in the season and it’s been fairly dry. We tried two of the anchorages listed in our cruising guide. No luck, both were too shallow. We lightly skid into the mud in each and had to use the muscle of our 220 horsepower single engine to back off in order to get unstuck. The mud creates a suction cup around the keel, and when you finally get enough force to break the muck’s grip, you can feel the vacuum violently break before you go zig-zagging in reverse.

Lucky for us, Lori on Tessa had made contact with a nearby tow boat company that sometimes allows pleasure boats to tie-up to its barges along the shoreline in Beardstown, Illinois. For a cool $25 (deftly negotiated by Lori), we were able to tie to the enormous bollards on a 35’ x 195’ rusty steel box used to haul cargo up and down the Illinois River. Overnight we heard a half-dozen tows pass, their massive screws pushing up lots of wash and vibrating our hull. The tows also shine powerful spotlights up and down the shore line, and this eery evening into our portholes, Close Encounters like.

Last day on the Illinois River and industry was giving way to wider and prettier river banks and more rolling hills and greenery. We spotted a bald eagle perched on a stump in the water and admired its powerful talons and majestic profile. Keenan connected his zoom lens and snapped a dozen digital shots. By late afternoon, we’d joined the fast-flowing Mississippi River. We gave thanks to the river gods we’d made it down the Illinois River without incident. We’ve anticipated getting to the Mississippi, with all its lore, for many moons.