Home The Lake and an Inlet

The Lake and an Inlet 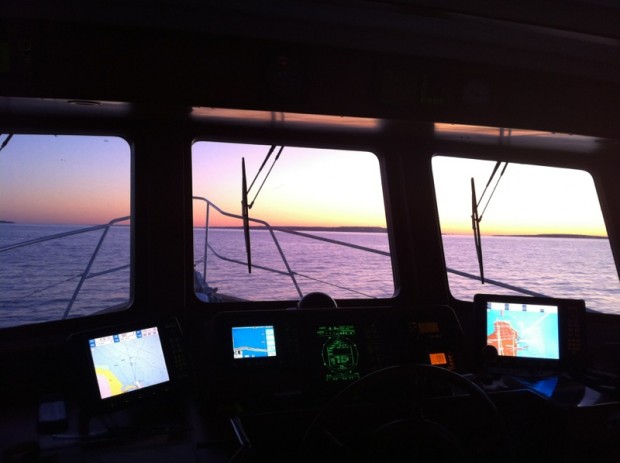 Calm before the storm. A pre-sunrise departure on Lake Michigan before the prevailing westerly winds kick-up on the lake. With more than 80 miles of fetch, the short-period waves gather steam and can pound the lake’s eastern side with surprisingly large waves.

Once the skies parted, we pushed-off from Harbor Springs and headed for Charlevoix, a relatively short passage of thirty or so miles. While the forecast was for southwest winds and two to four foot seas, we realized before long we were in for bigger waves, some more than eight feet from trough to crest. Our bow pulpit, which sits nine feet above our waterline, was plowing into blue water every few minutes as we’d hit a set of big short-period waves. Yowser!

New friends of ours who boat on the Great Lakes later told us to take the NOAA National Weather Service wave range and add the two numbers. If the forecast calls for three to five foot seas…expect eight footers. Not science but conservative, helpful and safety-first thinking.

At least the wind and waves were right on the nose for us. And thanks to world-class design and engineering by the Kadey-Krogen team, Muddy Waters was able to push through the head seas with little effort and minimal crew discomfort. The pilothouse in a Krogen trawler is the ideal command and comfort center. High enough to see all but a low enough center of gravity to keep captain and crew comfortable.

Keenan was so thrilled with the up and down motion (our stabilizers deeply dampened any roll) that he came up with a little game in the salon where he’d time his leaps just as the bow was pointed up. Not quite zero-gravity, but he definitely got some air and impressive hang-time. And thankfully he didn’t knock his noggin or require a trip to sick bay. He had a blast.

Back in the Exumas and central Bahamas, securing everything onboard before a passage was like clockwork for us. Survival suits in the salon, everything stowed, all drawers locked, etc. As the Ben Franklin saying goes, a place for everything and everything in its place. Our regular preparedness on Muddy Waters was the result of advice from others, anchoring out for three straight months earlier this year, regularly weaving between island cuts, going from depths of seven feet to a mile deep, crossing the Gulf Stream, an overnite passage in the Atlantic from Delaware to New York, etc.

We try never to underestimate the weather or anger the weather gods. But, the captain misses the, uh, boat every now and then (ok, more than that!) and forgot to ensure everything was buttoned up down below on this trip on the Great Lakes. Operator error is the term. We had drawers flying open, glasses clanking, things falling from shelves. Thanks to super sea legs and quick thinking by Jennifer, Keenan and Daria, they had everything in its place in under a minute. Phew.

Pushing our way through a few hours of big seas, we eyed the Charlevoix inlet and followed in a passenger ferry in so we could pass through the bascule bridge that opens on the hour and half hour. Entering the inlet, known as Pine Channel, was like entering a wind tunnel that also had waves funneled in. And then, as soon as the passenger ferry clears the draw, the the bridge shuts like a clam shell, thwack and a clank of steel on steel.

Now we’re three 45+ foot boats in a narrow channel with 20 knots of wind and washing machine waves pinched into a funnel. Turns out the Pine River also has two currents, each running in opposite directions. The top few feet of water, which are wind-driven, were moving in thanks to a newly clocked northwesterly while Lake Charlevoix was busy pumping its water out a few feet below the surface.

Carrumba we thought, time to swing the ol’ Mudster around and head back out to a lumpy Lake Michigan to wait another thirty minutes for the next bridge opening. In the words of our friend Dennis Fox, we had to drive it like we stole it. We used our barn-door sized rudder and the muscle from our CAT 3208 to turn Muddy Waters.

We did get Muddy Waters turned around thanks also to helpful air-traffic controller signals from the crew plus useful advice like, “Dad, you’re getting like very very close to the sea wall and it’s made of some scratchy steel and we probably shouldn’t ram into it.” They did get the point across.

Just as we were nose to the wind, the bridge tender hailed us on Channel 16. He said he’d had to quickly lower the bridge after the ferry had passed instead of holding it open for us because an ambulance needed to cross the bridge. Makes good sense, a sort of right of way thing. He then said he was opening the bridge. Now. Roger that, time for another 180.

We find excitement in the towns we visit for sure. We often experience it underway too. This time, we even entertained a host of spectators on the sea wall watching three large boats pirouette. Some gracefully. Some, ahem, less so. Kind of like those synchronized swimming Olympic hopefuls Martin Short and Harry Shearer.

Graceful or not, on Muddy Waters we had no raised voices, no flailing limbs, no skipped breaths – everyone just went to work. That always makes the captain proud. We chalked up the day as another opportunity to learn a few lessons, practice good teamwork and take-in the beauty and adventure of it all. Check, check and check.