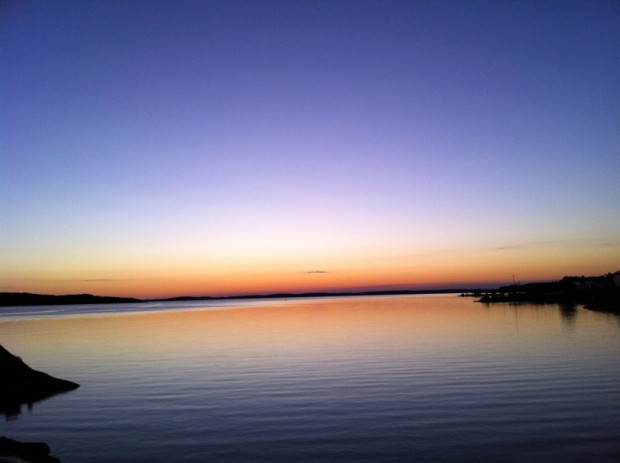 The subtle shades of dusk on the North Channel. Lots of beautiful cruising and anchoring in these somewhat remote cruising grounds.

The town of Killarney lies just about between the Georgian Bay and the North Channel, both of which sit on the northern side of Lake Huron. We heard from a few locals on the Trent-Severn Waterway and in the Georgian Bay that in the wake of American independence, the British (who continued to run affairs in Canada) strongly encouraged migration to all parts of Canada. The idea was to build a population base to fend off (displace really) the indigenous or aboriginal peoples and an expanding United States of America.

These locals told us the British turned to the Irish to help fill these remote towns or outposts. They probably gave names like Killarney because, well, it sounded like…home. We also heard that they lured emigrants over with promises of idyllic lives in lakeside villages with temperate climates. This is indeed a breathtakingly beautiful area; however, the winters are harsh and the fall and spring aren’t much different.

Given the igneous rock that surrounds the area and forms the Canadian Shield, there’s not much top soil so farming was tough. And transportation was nearly always by water. And, as we’ve learned over the last few weeks, navigating the northern shore of the Georgian Bay (known as Thirty Thousand Islands) is difficult enough with accurate charts and a sturdy mechanically powered vessel. A fishing village from the 1820s on, the first road into Killarney wasn’t built until the early 1960s.

Whatever the politics of its beginnings, today Killarney is a small and pretty town with charming wooden cottages and homes, some tucked into steep rock along the shore and others on the flatter northern side with carefully manicured laws. We stayed for two days at the Killarney Mountain Lodge and had a grand time. We were welcomed by the husband and wife dock masters who run the marina in the summers. Ginny and Gordon Kerr recently completed a circumnavigation (of the global variety) aboard their Beneteau 373 racing sailboat.

The Kerrs completed the trip over eight years, kept an online travel log detailing the trip, and mentioned some of the natural wonders of the Thailand coast as among the most beautiful places they saw. They were incredibly kind hosts and also terrific teachers for the handful of summer staffers. Gordon is also a terrific finger-pick style slide guitar player and on a visit to Muddy Waters he borrowed my guitar and I pulled out a harmonica and we had a great impromptu blues jam session.

We also took advantage of the lodge’s offerings and borrowed canoes and made our way back out the channel into the Georgian Bay, paddling about a mile and a half to a lighthouse perched high upon a rock cliff. We’ve kayaked a fair amount over the years with the kids, but we don’t often canoe. We think the last time we canoed with the kids with in Maine a few years ago when my brother Chris and brother-in-law Jeff took the kids on the Penobscot Bay. And before that, we recall taking the kids canoeing in Flamingo on the Florida Bay in the Everglades. We didn’t see any flamingo that trip but we saw a whole lot of alligators. That’ll keep you upright in your little floating tin can!

Jennifer and the kids also took out kayaks twice and paddled to both ends of the channel – into the Georgian Bay on one side and the Killarney Bay on the other. Good exercise plus adventure. The biggest danger is probably having a sea plane land or take off at the edges of the channel. We saw plenty of those. Hmmm, maybe we could learn to fly and do a Great Loop of sorts by sea plane…

We also got an up close look a various steel-hulled commercial fishing tugs, each of which was loaded with character…and characters. These interesting looking ships look more like the early ironclads of the Civil War era. They fish mostly for pickerel and whitefish. They’re designed to maximize the hold for the fishermen and their box-like lines announce their purpose loud and clear.

Departing Killarney, we spotted another black bear, this one also poking around the shore line. They’re beautiful creatures who look great on film but not so great on the trail at lunch time, staring at you like….well, like lunch. Though it was rainy and windy, we decided we’d turn Muddy Waters into a tour boat, take a side trip and drive into Baie Fine, a beautiful and narrow ten mile bay with fjord-like rock formations surrounding the water. Some of the rock here is from the most recent ice age 10,000 years ago. And some of it is thought to be among the oldest on earth, dating back more than 3 billion years.

We then back-tracked, exited the picturesque bay and made for the town of Little Current. We hadn’t experienced current in any great amount since leaving the Hudson, which is tidal all the way to Troy. The current in these relatively narrow cuts between islands is wind-driven, and we had about 2 knots of it coming in courtesy of 10 – 12 knots of northwesterly winds. The town dock is nice, new and easy, and the high-school summer interning deck hands great and in abundance.

We also ran into a number of Looper friends, and new acquaintances, and had everyone over coffee and some of Jennifer and Daria’s tasty and healthy cookies. As always, we learned lots from the other cruisers and also had some good laughs. Spending time with fellow cruisers, swapping stories, has also been one of the consistent highlights of our journey.