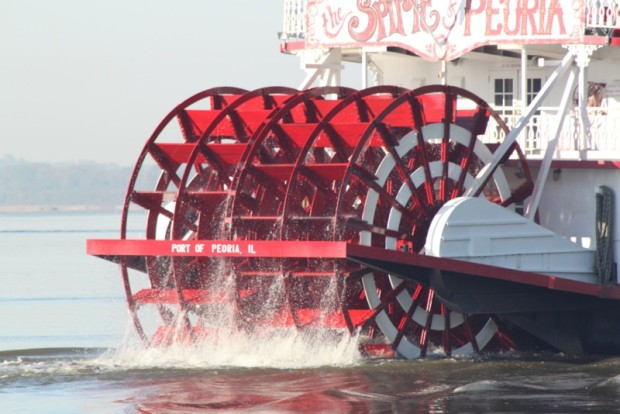 The paddle wheel of a Mississippi riverboat of the variety that dominated this river in bygone times. Keenan snapped this photo from Grafton, Illinois.

Keenan and Daria read around a thousand pages a week it seems. Can’t keep their noses out of books, including when we’re walking around town sometimes. We’ve hit just about every bookstore along the way, and we’ve met some wonderful shop owners and fellow avid readers. We’d even brought along the Adventures of Tom Sawyer and Adventures of Huckleberry Finn so the kids could get a feel for the Mississippi River. Rushing ahead, like the river itself, they read Twain in the Bahamas instead of in the Heartland. Oh well. Since those two books lay waiting on our salon shelves, ready to tell their stories again, I decided to re-read these two American treasures as we approached the great river.

While on the Mississippi, we learned Samuel Clemens got his pen name from a signal used by riverboat captains – “Mark the twain.” Twain from two, and mark from marking the water depth as two fathoms and deep enough for the riverboat to pass through. We learned quickly on the river system that shallow water could make or break your day, whether in the 1800’s or today.

First stop on the muddy waters of the Mississippi was Grafton, Illinois just past the confluence of the Ohio and Mississippi. With the river level so low (thanks to the dry fall), we practically dredged Grafton Harbour’s channel with our keel, dragging our way through the mud all the way to our slip.

We ran into a few fellow Loopers and said hellos and shared stories of the passage down the Illinois, including our favorite anchorages or perches alongside barges. We had dinner with the crews from Tessa and Inconceivable and talked about what lay ahead on the Big Mud. We also walked Grafton’s quaint main street and found some tasty local honey and produce. Jennifer and Daria explored the surrounding area on bikes, and we just missed a gathering of real-life ghost hunters.

Next morning we pushed off for the short trip down river to the new and finely appointed Alton Marina, still on the Illinois side and across from Missouri. This would be our home for a full week, and we were excited to settle in after driving for so many days in a row. We tucked into the fine marina just below the beautiful new Clark suspension bridge and promptly set-out to give Muddy Waters a bath, inside and out. We sent the spiders scrambling top-sides, and we vacuumed every nook and cranny below decks.

Living aboard, we don’t have much stuff, but we still seem to have accumulated things as we’ve traveled. Not souvenirs, just stuff. Like hoards of books. And of course loads of spare parts. The old boat saying goes that by bringing a spare part, you near guarantee the part it’s intended to replace won’t fail. We also like the sailor saying: “If it ain’t broke…don’t use it!” We don’t follow that one though; we’ve used everything we brought and every system on this vessel.

We spent a good half day re-organizing places like our lazarette (we call it the garage) and our small lockers. We did inventory on all our spares, including oil, filters, o-rings, impellers, and light bulbs. And marine toilet paper. Gotta’ have lots of that because the stuff you use in your house will foul up a boat’s plumbing right fast. All good on the inventory. Lucky for us, our 1939 Miami Beach home is relatively compact, and we came aboard Muddy Waters with a limited supply of people stuff.

With Muddy looking spiffy after her trip down the industrial Illinois, we offloaded our four bikes and toured downtown Alton. Not much there, though the kids did recognize the bronze sculptures depicting the historic 1858 Lincoln-Douglas presidential debates since we’d studied that immediate pre-Civil War history just days earlier

We also learned that the great flood of 1993 had so impacted downtown Alton (and scores of other towns on the Mississippi and Missouri) that its businesses never really recovered. We estimated more than half the stores remain shuttered. Just behind the nearly defunct main street, however, is a beautiful neighborhood with lovely turn of the century homes, well-manicured lawns, all set on steep hills or nestled between beautiful tree-lined parks.

We also walked about a mile or two to a local cemetery to see the grave of Elijah Lovejoy, a 19th century journalist, editor and minister who was murdered by a pro-slavery mob for in his defense of a free press and for his criticism of slavery. Jennifer had read a book that referred to Lovejoy (who was from Maine), and when she found out he was buried nearby she asked around and found the cemetery. We had what we hope was a rich discussion with the kids on race, slavery and also on a free press and its importance to the American way of government.

The following morning we rode our bikes a few miles along a path south to the National Great Rivers Museum at the Melvin Price lock and dam. We took a guided tour of this massive lock, and having been through nearly a hundred locks to that point, the kids impressed the tour guide with their knowledge of the inner-workings and terminology of these engineering marvels.

The museum adjacent to the lock and dam is the finest we’ve seen covering the river system. The kids especially enjoyed the 3D towboat simulator and they got a chance to try their hands at guiding a tow and its barges into a lock. We also saw an excellent short documentary on the Mississippi called the Power of the River. Another fruitful homeschooling field trip.

Since we were still more than twenty miles from St. Louis (there’s no place for pleasure boats to stop in St. Louis itself), we decided to rent a car and drive across the Mississippi, into Missouri and down into St. Louis. We met Jennifer’s family friend Soraya for a lovely breakfast, caught-up on family news and events, and then got great advice on places to visit. That afternoon we visited the Gateway Arch an architectural wonder and the tallest man-made monument in America. It symbolizes the opening of the west, and St. Louis continues to be a cross-roads from east to west in America.

Inside the Arch’s museum, Jennifer instantly recognized some of the other great works by Finnish-American architect Eero Saarinen, including the chairs in the egg-shaped pods that carried us to the top of the arch. The kids were impressed with the views and peppered the park ranger with questions about whether winds would cause the arch to sway. The answer they got was that winds from 50 – 100 mph would cause the arch to sway about…one inch. Fine engineering.

Having soaked in the spectacular views from atop the 630 foot arch, we made our over to the City Museum, about the hippest museum you’ll ever come across. The four of us spent nearly three hours marveling at all the industrial equipment the museum founder Bob Cassilly had recycled and turned into art and an enormous playground. Sadly, Cassilly was killed the week we arrived when his bulldozer turned over. Turns out he did much of the labor and machine-intensive work himself in this museum. The kids ranked this highly non-traditional museum as their favorite on the entire trip.

We returned to the city a few times, enjoying Soraya’s gracious Persian hospitality – dried fruits, nuts and tea for all! And we also enjoyed chatting with Soraya and her husband Michael – also a doctor at Washington University – about their children and grandchildren. They listened intently to our stories, and it was nice to share some of what we’ve learned along the way.

We also passed by Washington University, where one of Jennifer’s three sisters went to college. (Unfortunately, we didn’t make it to Columbia, Missouri, where Jennifer got a graduate degree in agricultural economics.) We visited the large and open St. Louis Zoo and walked most of St. Louis’s beautiful Forest Park.

For Jennifer’s, um, 29th birthday we rode our bikes to Duke’s Bakery in Alton and enjoyed a terrific morning of biking and frisbee in the park. Daria whipped-up a delectable cheesecake from scratch and we traveled into St. Louis and met Soraya and Michael for dinner at a local and organic place Jennifer had scouted out earlier. We’d each now celebrated a birthday while at sea, each day especially memorable.

We had a wonderful stay in the St. Louis area, learning lots about American history and getting a chance to share some of our adventure with others. We were also looking forward to our run further down the Mississippi to the Ohio River, ready to see more of what Twain imagined when he conjured up his characters Tom Sawyer and Huck Finn.