Home Up the Tennessee River

Up the Tennessee River 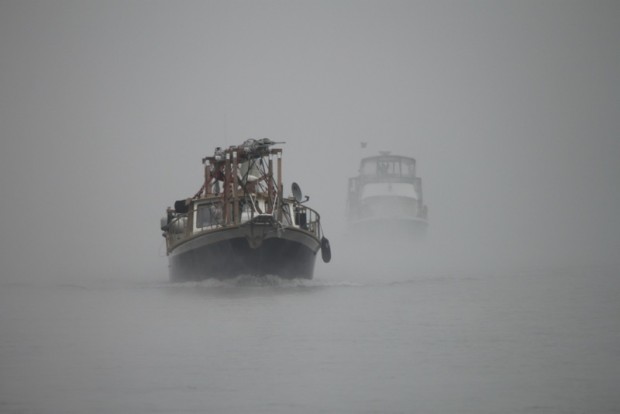 Here’s another one of Keenan’s photos. He took this picture as we departed Clifton, Tennessee and returned to the Tennessee River on our way to Luka, Mississippi just as a thick fog was lifting.

Having come off our little adventures on the fast-flowing waters of the Mississippi and Ohio, we decided to settle-in for a few days at Green Turtle, located on the Cumberland River in the town of Grand Rivers, Kentucky. We connected with our friends the Fallons and later joined an impromptu pot-luck dinner with the other Loopers in port.

As always, it was nice to meet other cruisers and share stories. So much centers around the water and the common threads in the path we’ve all taken, but there’s much more to it. Every Looper we’ve met from day one has had a quiet sense of adventure, self-sufficiency and helpfulness. It’s something kids (and adults) learn best by witnessing, experiencing and offering. We’re thankful we’ve been around so many good people, from all walks of life, in so many places across the Bahamas, the United States and Canada. There’s no better classroom.

Speaking of classrooms, each morning in Grand Rivers we spent a few hours on more traditional homeschooling, focusing on American History, World Geography and Composition. (Keenan and Daria completed their year of Math and Science coursework a few weeks earlier.) See our February 19th blog post for more on our overall approach to homeschooling.

We used the afternoons to explore our wooded surroundings and the quaint town of Grand Rivers. Keenan and Daria spent lots of time with the Fallons just running around, biking, skateboarding and doing the things that kids do. We traveled into town with the Fallons for a local musical production called Variety at the Badgett Playhouse. Later in the week we returned to the theatre to see the same all-local cast in the musical comedy Smoke on the Water. Jennifer, Liz and the four kids also organized a baking class with a local chef in Grand Rivers. They brought home a strawberry rhubarb pie that transported me to summertime in Maine on the Penobscot Bay. Umm good.

Sebastian and Paisley’s dad, Andrew, who’s a 6’5” former Navy man, took the kids hunting for firewood one afternoon, and we later basked in the glow of a bonfire on the Cumberland, roasting marsh-mellows and trying our best to sing a few campfire songs. Liz and Jennifer also took the kids to the Land Between the Lakes National Park, where they saw elk and deer roaming freely and the beautiful untouched forests of this long island stretching north to south. We also borrowed the marina car and traveled to Paducah, Kentucky back on the Ohio River and walked its historic streets and peeked in its shops and cafes.

We have a friend, Todd, from right around these parts, and we’d hoped to see him here; unfortunately, he wasn’t able to get away from work and travel all the way from Oregon to visit his former Kentucky stomping grounds. We’d also hoped to meet my parents here since we’d once said we’d see lots of family on the east coast and in the Great Lakes but probably very few in places like Paducah. We couldn’t coordinate the timing, but we’ll see them down the water soon, probably on the west coast of Florida. Keenan’s looking forward to playing chess with Pappy, and Daria is especially looking forward to Oma’s family-famous Persian rice.

Once on the water we decided again to make miles on the river system, and we passed up a number of beautiful anchorages in what are called the Kentucky Lakes. We ran all the way to Pebble Isle Marina, in New Johnsonville, Tennessee, where we topped up our fuel tanks at $3.64 a gallon, about the cheapest fuel for a few hundred miles but still $1.70 more per gallon than when we started the trip. We arrived late in the evening and departed early in the morning, but not before the kind marina owner brought the kids a dozen of the finest local donuts we’ve had in a long while. Jennifer also sneaked in a sunrise run through the Johnsonville State Historic Park, continuing her rigorous training for a multi-day adventure race in Costa Rica come January.

We arrived the next afternoon at Clifton Marina in Clifton, Tennessee. We said hello to the other sailors in the marina (on Ookpik and Salty Paws) and then took a walk into town. Since it was Sunday, the streets were quiet and shops closed. The only sign of commerce was a wagon filled with hundreds of colorful gourds of all shapes and sizes. There was a price list and a small metal box, with no lock, for cash. Don’t see that too often (or, maybe better said, often enough). There’s lots of Civil War history along the Tennessee River too, and Jennifer sits with the kids and reads the history of each area we visit.

Next morning was socked in. Fog as thick and still as any fog we’ve seen on the Maine coast over the years. We did a wind dance to clear the soupy cloud but must have been out of step because all remained still and wet. By late morning, however, the sleepy fog awoke and began to stretch and get up and eventually move on. Four boats, including Muddy Waters, departed the basin together in a light mist, calling a security alert on channel 16 to let any other boats know we were re-entering the river. Keenan snapped the shot on this blog post of the sailboat and trawler astern of us while we were exiting the marina basin.

After a long and beautiful day on the water, with picturesque riverbanks and autumn leaves on the hills, we arrived at the Pickwick Lock late afternoon. Four of us waited for about an hour while a down bound tow came through the lock. Though the other three boats headed for an anchorage just on the other side of the lock in Pickwick Lake, we decided to continue for another five miles on the open lake so we could make it to the Grand Harbour Marina in Luka, Mississippi that evening and be ready to explore the area by car the following morning. Oh, and with Jennifer’s training schedule, the immediate shore access works great for us. Having spent three straight months anchoring-out through the Florida Keys and in the Bahamas, we miss the feeling a bit. We anchored out a number of times coming up the east coast and in Canada but only a few times since.

Since we’re late in the boating season and things were quiet, Grand Harbour Marina offered us one of their courtesy cars for the entire day. The kids called it the ice cream truck, and it reminded Jennifer and me of a bread truck or the type truck we saw daily when we lived in South America. We put it to good use, spending the entire day at the Shiloh National Military Park.

We’d read a fair amount with the kids before arriving. Two days of fighting in this first major battle in the western theater resulted in 24,000 killed, wounded or missing. At the Shiloh battlefield interpretive center, we watched a 1950s documentary on the battle. Though the park ranger immediately offered that they’re working on a newer film, we all commented afterward that the absence of digital enhancements and colors gave the picture a more realistic quality and left a strong impression on all of us.

We walked each of the areas around the battlefield, including the Shiloh Indian Mounds, also a national historic monument. On our self-guided battlefield tour we saw Bloody Pond where dying soldiers crawled to satisfy an unquenchable thirst, and the Hornet’s Nest where Ulysses S. Grant’s forces held the line long enough against a fierce Confederacy attack to allow reinforcements to arrive via the Tennessee River. We’d walked the same fields and sailed the same waters. We also visited the original one-room wooden Methodist meeting house in Shiloh from which the battle, ironically, takes its name. Shiloh means peaceful or tranquil in Hebrew.

Sitting in the grass at the foot of the tallest monument in the park, a tribute to an Ohio regiment, we had lunch we’d carried along and talked about the vast destruction of American lives and property that happened right around us fewer than 150 years ago. With more than 600,000 dead in the Civil War (or 2% of the population at the time), the equivalent percentage today would be around 2,000,000.

We also followed Pappy’s suggestion and – though nearly a thousand miles from another Civil War battlefield in Pennsylvania – read the Gettysburg Address out loud with the kids. We counted the beautiful and solemn fall day, a day in which we were virtually alone on these hallowed grounds, as one of our finest.