Home Traveling East to the Bahamas

Traveling East to the Bahamas 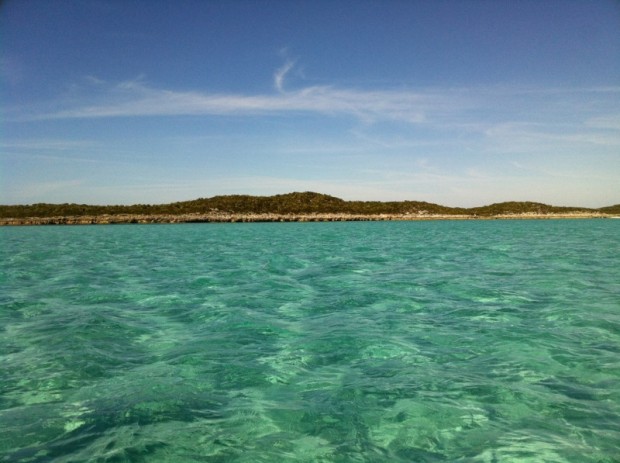 Here’s a shot off our strern while at anchor off Highborne Cay in the Northern Exumas.  The water in this anchorage is nearly twenty feet deep, but it’s so clear you’d swear you could stand-up in it.

We’re here.  In the islands that is.  We’re writing from aboard Muddy Waters on a mooring ball near Emerald Rock in Exuma Cay Land & Sea Park in the southern Bahamas, part of the Bahamas National Trust (an NGO that manages the Bahamas’ parks).  It’s beyond beautiful here, with crystalline waters so deceptively deep in places and so seemingly shallow in others, that you’re left with a kind of visual vertigo if you stare for too long.

We arrived this afternoon, picked-up a mooring ball (thanks to excellent team work by Jennifer, Keenan, and Daria), checked-in at the ranger station, and hiked to the top of (Hey) Boo Boo Hill, with a stunning view of the deep blue Atlantic to one side and the aquamarine Bahamas banks to the other.

So how’d we get here?  Well, thanks to the intrepid Fox family, aboardSea Fox, we staged our crossing from Key Biscayne, departed at 0500 (5:00 am) on Sunday and saw a spectacular sunrise just about as we entered the Gulf Stream, about ten miles offshore.  Despite winds around 15 knots from the NE (and clocking east), we had a surprisingly good ride – a little bumpy, with about five foot waves, but nothing to upset the crew too much.  Or at least the captain wasn’t too upset; maybe let’s hear from the crew next blog…  Our boat’s significant displacement (some 55 gross tons) and hydraulic stabilizers helped smooth the way.  I thought so anyway.  But it’s undisputed onboard that we did eventually arrive intact atCat Cay Marina, just south of Bimini, with its beautifully calm and clear waters.

We flew our yellow quarantine flag, cleared customs, raised our Bahamas courtesy flag, and then…we were off again, steaming across the Bahamas banks.  With an early tip from another kind cruising couple (Lawrence and Linda Reeve, also aboard a Kadey-Krogen 58’) who know the Bahamas like few others thanks to nearly 40 years of cruising here, we continued on east on the banks, finally putting down the hook near Russell Light around 2000 (10:00 pm).  In what seemed like the middle of the sea!  We anchored in about 15 feet of water, some 10 miles from the nearest land.  Not many places where you can anchor in such shallow water so far from land.  We set out lots of chain and tried not to crowd Sea Fox…

We were up again at 0300 (yep, that’s 3 in the ol’ a.m.) and weighed anchor at 0400 to begin the second long day of our journey, this time passing through the Tongue of the Ocean (and seeing depths of more than a mile!), through Nassau Harbour, and then onward to Highborne Cay near the top of the Exumas chain.  We arrived around 1700 (5:00 pm), a little before sunset, and dropped the anchor.

A seventeen hour day followed by a thirteen hour day.  Phew.  And, ok ok, it was a little, um, bouncy at times.  The crew was plain tuckered out.  But, better two long days to get here than two shorter days and a third day of unpleasantly rough seas.  Safety – and crew happiness – is so much about the weather.  We learned – from the Foxes, naturally –  about a terrific marine weather routing service led by meteorological guru Chris Parkerand have read Chris’s daily reports religiously.  Bad weather, we stay put; good weather, we go.

Today, we motored south for four hours, in the perfect calm, to the park where we’re currently sitting under a sky fully filled with stars.  Here, the captain and crew are happy as clams.  Or conchs.  We have a coral head a short swim from our boat and will dive tomorrow, as soon as we finish our home schooling class (American history tomorrow) on the Jamestown colony and on the park (Jennifer found some excellent literature we’ll incorporate).

We’re grateful to the Foxes for accompanying us to the Exumas (buddy boating, as I guess it’s called in the industry – though this is more like teacher and students) and continuing to calmly explain so much  to us along the way.  We know our families are thankful we arrived safely, and we’re thinking about them and sending lots of love and positive thoughts their way this week in particular.