Home Single-handing up the east coast

Single-handing up the east coast 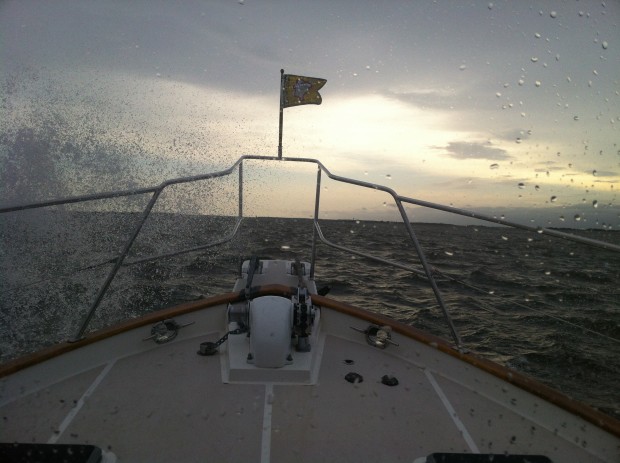 Before the real world reels us back in, we have another adventure planned aboard Muddy Waters.  We cooked it up during our travels last year, somewhere in Ontario’s Georgian Bay, an area that reminded us of the Maine coast.  The Plan: bring our beloved 48’ Kadey-Krogen North Sea trawler (now twelve years old) all the way up to Maine from Miami.

We travel to Maine each July (by plane and car), visiting one of our favorite places on Earth – the community of Bayside on the Penobscot Bay.  Bayside is a special place for the Samways, and our kids have been going since they were little, just like my siblings and I did and just like my dad and his siblings did.  Same place.  Hasn’t changed a bit.

My dad’s from Bangor, Maine, his family having arrived on the Maine coast from Ireland in the 1850s around the time of the Great Famine.  My dad’s cousin Patrick Samway, S.J. (who presided over our wedding back in 1994) is a Jesuit, scholar, writer, story-teller, and family historian (among other things!) says the Samways were One-Boaters.  Back in the 1800’s, the Irish who could afford it would take two, three, or more boats from Ireland and work their way beyond Maine and down the American east coast – Boston, New York, the Chesapeake and on down.  The Samways could only swing one ship.  Lean times.

Family lore has it the Samways arrived in America, went to work as laborers and sent money back to brother Martin who couldn’t even afford the one-boat fare.  Ol’ Uncle Martin, who was an all-star Irish hurler and somewhat of a village personality, apparently threw a big party in County Cork, spending all that hard-earned New World money right quick in an Old World kind of way.  The story goes that this happened a few times with Uncle Martin before the Samway relatives wised up and realized some of the Samways were destined to stay on the Emerald Islefor good! 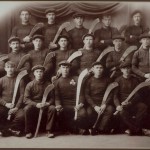 Uncle Martin is 3rd from the right, center row.

With that as history, we wanted to be sure this Samway family made it all the way Maine, like modern-day One-Boaters.  But, how to get our trawler nearly 2,000 miles north from our home port in Miami Beach?  How about Cap’n Mike?  He’s trying to write a novel, and everyone knows that’s not a real job, so he has plenty of time.  Fair enough said the captain, he would make the sacrifice.  Ok ok, it was my idea in the first place, I do have the time, I loved the idea and the only sacrifice is that it just wouldn’t be the same cruising without Jennifer, Keenan and Daria.

After consulting our log book from last year, charts, cruising guides, and fellow sailors, we estimated timing and plotted route options.  I reckoned I’d travel with crew each leg of the journey up the east coast, including one or two multi-day offshore runs when the weather allowed it.  Then, once school let out for the summer, Jennifer, Keenan and Daria would fly north and join me onboard Muddy Waters wherever I might be early June, probably somewhere in Long Island Sound.  Then we’d cruise Down East together.

Like packing the wood-paneled Dodge station wagon for a family road trip in the 1970’s, Jennifer and I made a dozen trips back and forth from our house to the marina to load up Muddy Waters with everything for summer, from skateboards to organic eats.  Waking at dark on departure day, I gave each kid a gentle kiss on the forehead while each lay asleep before school.  Jennifer drove me to Muddy Waters, gave me a big hug, told me to be safe and then helped me shove off from our home port at Sunset Harbour in Miami Beach on Thursday, May 3rd, at 0700. 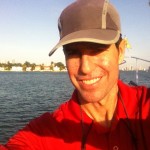 I had plenty of able volunteers for crew, including family, close friends and fellow boaters.  But, timing on the water depends so much on M&M’s – mother nature and  maintenance.  Off the water things work on tighter schedules – work, flights, appointments.  It seemed to make sense for me to just push-off solo.  Which I did.

Check the Travel Map to see a summary and some photos of each leg of the journey northward.  I’ll cover a few highlights here.  I anchored-out nearly every night, which allowed me to start early and arrive late.  Swinging on the hook, as they say, in quiet anchorage is one of the most peaceful and self-sufficient feelings in boating.  Along the way, I saw the Supermoon rise and then the sun set at an anchorage just behind NASA’s former Vehicle Assembly Building near Merritt Island in Florida. 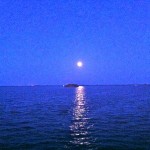 I was fortunate to have one terrific crew member join for a nearly a week – my dad.  Pappy joined me when I reached the top of Florida and stayed aboard through Charleston, South Carolina.  Who’s lucky enough to cruise alone with his or her dad for a week?  I am.  Pappy and I had a memorable week – filled with music, nature and lots of laughs – cruising from the Florida-Georgia border to South Carolina.  See his write-up here.

After one long run in South Carolina following Pappy’s departure, I estimated from the charts there would only be room for one or two boats in the anchorage I was considering.  When I arrived, near dusk, a sailboat from Canada was already peacefully anchored.  No problem I thought, two’s company; I’ll nestle-in just behind the pretty sloop.  No dice, crab pots everywhere.  I anchored in just about the only other spot with deep enough water, which bordered a channel trafficked by commercial fishing boats.  A few went by full tilt later in the evening and then just before first light.   They have work to do – shrimp to catch and sell – so fair enough!

While at that same anchorage I got an e-mail from my cousin Shannon who’d met-up with us in Myrtle Beach last year.  Shannon works in film production and she was doing set-up work for a new film set in Southport, North Carolina based on the book Safe Haven by Nicolas Sparks.  Good timing since I was only about 40 miles away.   Seeing family while traveling onboard Muddy Waters is always special.

Steaming through Norfolk, Virginia and into the Chesapeake Bay, I arrived in Indian Creek and our friends the Hagens picked me up and brought me to their lovely home for dinner.  We recounted our memorable week spent in an Exumas island anchorage waiting out three or four days of steady 20 knot winds with our friends the Reeves.  I noted that I’d anchored in the Alligator River a few days earlier just as a storm cell passed through with 35 knot gusts (see picture on the left for my expression just before the hail started…) 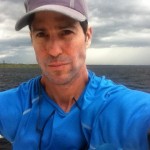 While in the Chesapeake, I welcomed aboard a former college professor, John McNeill, and his four kids.  We anchored in the Yeocomico River, swam, jumped from the pilothouse top, paddle boarded, BBQ’ed, explored in the dinghy and generally caught up on the past 20+ years. 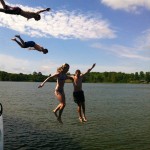 Because I had a meeting in Washington, D.C., and I’d arrived earlier than expected in the Chesapeake Bay, I decided to bring Muddy Waters up the Potomac about 100 miles to the nation’s capital.  Steaming into Washington D.C., passing Mt. Vernon, Ft. Washington, Alexandria and then seeing Georgetown, the National Cathedral, the Lincoln Memorial, the Washington Monument, the Capitol Building – it’s all breath-taking and a reminder too of how much the waterways meant to early America for commerce and politics.

A few days later, I was in Annapolis for what turned out to be nearly two weeks – one week because I had to return to Washington, D.C. (this time by bus) and one week because of unfavorable offshore weather in the Atlantic.  In Annapolis, I had a wonderful visit with my uncle Terry and cousins Lee and Lyn and their husbands and kids and was lucky to have my cousin Michelle and her daughter Emma drive over from Baltimore for some music and cookies.  I also spent some time with Larry and Shannon in the local Kadey-Krogen office, located right inside the Port Annapolis marina grounds. 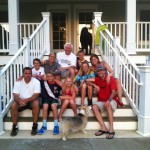 Once a weather window appeared, I began moving up the Chesapeake, through the C&D Canal and then down the Delaware Bay to Cape May, New Jersey.   I had to trouble-shoot some generator issues, with our ace technical expert and friend Scotty walking me through wrench turns over the telephone.  With that finally squared away, I only slept a few hours, then woke and weighed anchor in the dark and set-off at 0400 for a 16-hour or so offshore journey along the coast of New Jersey. 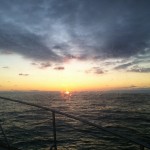 Though the wind was light, the five foot Atlantic swells on the beam made the ride a little uncomfortable for Muddy Waters’ sole occupant.  A few engine room checks later and the captain was feeling like a crumpled one dollar bill pulled from a load of wash.  About seven hours into the trip, I decided to pull into the Atlantic City inlet and anchor to get myself organized.  I took a nap for an hour, ate a gourmet PB&J sandwich, drank a half gallon of water, weighed anchor and then headed back out to sea.  Ah, much better.

This time I moved farther offshore – about 8 miles – to get to deeper water where the shallows wouldn’t cause the swells to pile as high.  Or maybe it was just the peanut butter sandwich.  Either way, I felt much better.  With evening approaching, I decided to pull into the Shark River inlet and anchor just beyond the inlet drawbridge, about 25 miles south of New York City.

Next day I steamed into New York Harbor around noon.  Spectacular.   Last year when we arrived the harbor was like downtown in rush hour.  We wrote about it here.  This year it was quiet as a country road by comparison.  I anchored for a few hours in a small basin behind the Statue of Liberty to wait for a favorable tide to run the East River toward Long Island Sound. 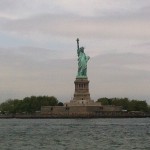 Catching the current, I zipped (at a cool 9 mph) past the Battery, the Brooklyn Bridge, the United Nations building, Hell Gate, LaGuardia Airport and then into Long Island Sound.  I anchored out in Manhasset Bay, on the banks of a picturesque town.  Next afternoon I crossed the Sound and was in Westport, Connecticut.

Big day, most anticipated of the trip for the captain.  Jennifer, Keenan and Daria were coming to join me aboard Muddy Waters.  I’d traveled some 1,500 miles and taken more than a month to arrive.  All part of our plan hatched a year earlier while traveling in Canada’s pristine Georgian Bay.  In contrast to my winding and watery travels, Jennifer left from Miami and took about three hours to get here!  The kids were at a cousin’s quincenera in Ohio so they flew in on their own to New York – took them an hour.  Our friend Jennie, and her kids Adam and Abigail, brought everyone to Muddy Waters for our reunion.  Hugs and kisses all around. 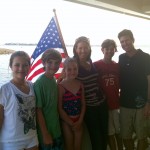 We spent the next day catching-up, laughing,  jogging the area, cleaning the salt from  Muddy Waters’ topsides and catching up some more.  That evening we also welcomed aboard a college friend, Mark, and his kids for a visit and then they all dropped us in the quaint town of Westport for an evening stroll.  Just like old times.  I sure did miss Jennifer and the kids over the month plus it took me and Muddy to get up here.  It’s so good to be back together onboard.  Feels like home.