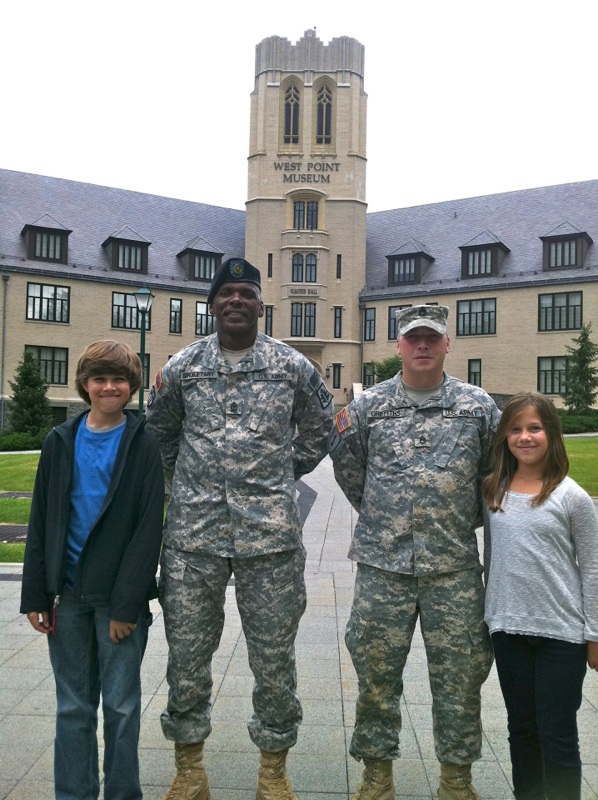 Keenan and Daria with two officers, standing in front of the West Point Museum after our tour of the U.S. Military Academy campus.

With our hearts, minds and bellies full from a whirlwind visit by sea to New York City, we cast off Muddy Waters’ lines, plowed through a number of mountainous ferry and tug wakes, and steamed slowly up the mighty Hudson River, passing scores of spring sailboats, and bucking a two knot current. The Hudson and its sinuous valley, formed by receding glaciers tens of thousands of years ago, is tidal all the way to Albany and is an estuary through its lower half, with fresh and salt water mixing through the flushing process of the powerful Atlantic tides and the fresh water flow feeding the river from the north.

Not fifteen minutes beyond Manhattan’s steel and glass, we found ourselves in a beautiful valley, cut with rock and lush green vegetation and the occasional (and always spectacular) riverfront mansion. We gave the kids a break that morning from home-schooling so we could all take in the spectacular scenery. Within a few hours we passed under Bear Bridge, a connecting point on the Appalachian Trail. Jennifer has a girlfriend and adventure race partner who’s hiking the entire Trail, which begins at Springer Mountain in Georgia and ends at Mt. Katadhin in Maine. Mt. Katadhin is a mountain dear to our hearts in the Samway family. My dad first climbed it as a scout in the late 1940’s, and our kids (and nearly all their cousins) climb it every summer when we visit Baxter State Park from Bayside, Maine.

With great anticipation, we approached the famous S-shaped curve in the Hudson. That bit of fortuitous geography made the area an ideal place on the river for a military post. Any sailing vessel wishing to sail up or down the Hudson would need to slow down significantly at the bend, leaving it at the mercy of cannons on shore. And that’s precisely why the Continental Army occupied this strategic point in 1778 in the American Revolutionary War. The idea was to keep the British from controlling the Hudson and cutting off New England from the rest of the rebellious colonies to the west of the river. West Point now is the longest continuously occupied military post in the United States.

Viewing the U.S. Military Academy from the water gave us a good sense of its strategic placement. It’s both beautiful and imposing, and we all stood on deck in awe of it all. Then the captain recalled we had a tight turn in an area of fast-moving water. We also captured a reading of 172 feet on our depth sounder, reminding us just how much the water has carved through this area over the millennia.

By late afternoon, having seen some of the prettiest surroundings we’d seen to date, we arrived at our destination, Hyde Park Marina, just north of the town of Poughkeepsie. Finding a simple and brand new 100’ floating dock, we were pleased to be tied up in a quiet setting with no ferries roaring by creating crystal-clanking wakes. (Well, our crystal is really just clear plastic from Target; but, it still clanks!) The following day, my uncle Tim Samway and aunt Anne Marie arrived from New Hampshire for a visit, and we headed south in their car back to West Point, this time by land.

We took a terrific guided tour of the entire campus and then visited the West Point Museum. The history on campus and in the museum is remarkable. Two presidents, numerous famous generals, and countless other distinguished Americans (all the graduates really). Weapons and other artifacts from some of the world’s greatest military leaders. As part of their home-schooling, we’ve started having the kids write a few paragraphs each week on a historical place, event or person. Keenan was quick to select West Point as his topic this week.

We also traveled with Tim and Anne Marie to the CIA. No, not that CIA. The other CIA, the Culinary Institute of America. In the early 1970’s, they bought a former Jesuit missionary building located on the banks of the Hudson. We enjoyed a terrific dinner at one of the on-campus restaurants, this one called American Bounty and serving Hudson River Valley regional and seasonal dishes. We’re grateful Tim and Anne Marie traveled all the way from New Hampshire to see us, thank you! Jennifer is already planning her own little boot camp with friends next year. Bike the Hudson River Valley and Catskill Mountains, spend time doing yoga at a nearby ashram and then take an intensive cooking or baking class at the CIA. Any volunteers?

We also took the kids to see the Vanderbilt mansion located in Hyde Park. When Frederick Vanderbilt died, one of his nieces inherited the six hundred acre property and spectacular vacation home. Neighbor Franklin D. Roosevelt encouraged the niece to donate the home to the National Park Service, which she did. Walking the grounds after hours, we spent a while talking to members of the local volunteer group that maintains the Italian style garden adjacent to the house. They gave us great background on the Vanderbilt family and house and even included local lore and gossip! We always learn so much from local folks, and it’s been a treat to spend the time just chatting and hearing people’s stories and telling a little of our own. The kids usually run the show, and we’re happy and proud to sit and listen in.

We also had an especially enjoyable visit to FDR’s home, museum and presidential library in Hyde Park. Walking through the FDR home and seeing his office, which remains just as he left it, as well as his famous 1933 inaugural address – in pencil on a yellow legal pad paper – brought history to life for all of us. We then visited Eleanor Roosevelt’s home at Val-Kill. Although we’re focused on the Civil War in our U.S. history homeschooling textbook, the kids have been fascinated by World War II, and Jennifer and I have spent a fair amount of time discussing that war too with the kids, essentially running parallel discussions. The kids recently finished young reader biographies on FDR and Eleanor Roosevelt too, and Daria’s essay this week is on ER (as the park rangers here refer to her). Jennifer and I also picked-up for ourselves a biography of FDR by Jean Edward Smith.

Next stop on the Hudson, the Village of Catskill. We spent two nights at the quaint Catskill Marina, parked under a giant poplar tree. We picked up fresh produce at a Saturday farmer’s market, met the town mayor, and hiked a picturesque bird sanctuary just across the creek from our marina. We also got an after-hours tour from the local museum curator whom we met while wandering around town. He told us the story of captaining a working replica of Henry Hudson’s Half Moon sailing ship in New York Harbor on the morning of 9/11 with a class of 7th graders. The pictures he showed, and stories he told, us were moving and left a strong impression on Keenan and Daria. We thought a lot about that class of youngsters and where they might be today.

Next morning we pushed off for Waterford, NY and the town’s lovely waterfront just a short walk from the first lock on the Erie Canal. We first traversed the Federal Lock at Troy, and had a smooth ride up thanks to good work from the kids with the lines. We then tied-up on the free and beautifully maintained floating dock (with water and power) at Waterford with nearly a dozen other boats, including three or four classic tugs. Waterford is home to the annual tug boat round-up, and we were lucky to get to see a couple of them along the way, including Urger, the flagship of the NY Canal System. We even got a personal tour from the tug’s operator while in Little Falls just a few days later.

During Waterford’s Sunday waterfront farmer’s market, Daria – our budding entrepreneur – set-up a small table for her wares and sold a good amount of her hand-made jewelry. We also lowered our stand-up paddle boards from the top deck and cruised some of the lower Mohawk River. For Father’s Day, Jennifer and the kids made a picnic lunch, and we hiked to the far side of Peebles Island State Park and chowed down on some healthy eats on a cliff overlooking some small rapids.

The kids then spent nearly two hours traversing some small rapids by carefully hopping (if there’s such a thing) barefoot across the slippery rocks to the middle of the river. We all returned to Muddy Waters tuckered out from a nice hike and picnic. Lots of good fun on the water and on the trails. A perfect Father’s Day.