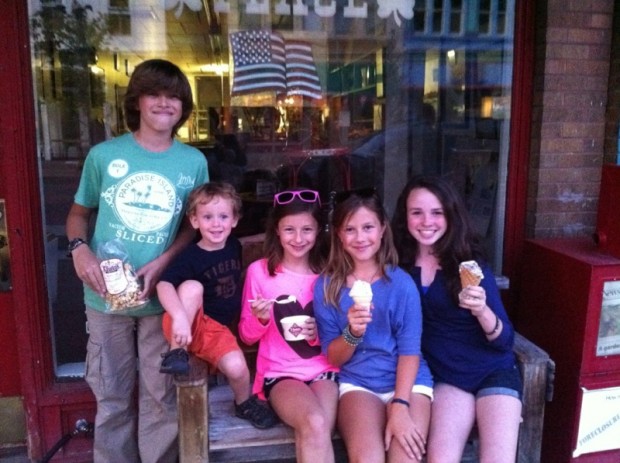 Nothing like ice cream with your cousins on a warm summer day by the lake. Here’s a shot of Keenan, Alex, Micah, Daria and Kathryn with treats in hand and shortly after a game of frisbee in the park.

Back in U.S. waters, we traveled through the DeTour Passage dodging a few tankers into the northern part of Lake Huron proper and made our way toward the Straits of Mackinac, the meeting point of Lake Huron and Lake Michigan. We’d originally set sail for Mackinac Island but were unable to get a slip in the marina there since it’s available only on a first come, first served basis and was full up. Instead we found a slip at Mackinaw City. Note the spelling difference between Mackinaw and Mackinac; but, pronounce them the same – ending with aw, like aw shucks – or even little kids will correct you on the spot.

With some help from a few kind boaters at the city marina, we were able to squeeze into our narrow slip between a fair amount of exposed steel on the docks and pilings. They must need the steel so that things don’t get bent out of shape during winter. We were lucky not to take home a steel tattoo on Muddy Waters. We also met a couple on a nearly new Krogen 48’ North Sea trawler, and they gave us a tour of their beautiful boat and also some helpful local knowledge on routing and anchorages.

With forecasts of whipping 20 knot winds and 4 – 6 foot seas, we decided to stick around an extra day and take the ferry to Mackinac Island with our Looper friends Bruce and Chris on the boat Bade Boomer. As we departed the harbor and headed into the straits around 11:00 am, we immediately noticed just how far off the forecast was for the day. Barely a ripple on the water and no wind at all. A gorgeous boating day. Weather’s finicky like that, and I reckon a meteorologist is like a baseball player. If you get a basehit three times out of ten for your career, you’ll probably make the hall of fame.

Once on Mackinac Island, we biked the beautiful eight-mile loop along the island perimeter. We also visited Fort Mackinac, which changed hands a few times from French, to British to American up through the War of 1812. We’ve visited a number of historic forts with the kids, and this was clearly one of the nicest – in particular because officers were allowed to bring along their families. We also toured the historic village and downtown and spent a good amount of time listening to a blacksmith and his apprentice talk about their craft. Exercise, nature and history all in one place made Mackinac Island a terrific Samway stop.

The following morning we set sail from Mackinaw City at 6:15 am, just before sunrise. We wanted to get an early start for Harbor Springs because my sister Jaleh and her oldest of three, Micah, were planning to meet us, together with cousin Kristi and her kids Kathryn and Alexander. Our kids were giddy with anticipation and couldn’t wait to see their cousins. They’d practically prayed to the weather gods to ensure we had light winds, allowing us to leave port and travel the fifty or so miles south on Lake Michigan. They must have asked a dozen times if we could go just a little faster. But life on a trawler is life at seven knots.

Shortly after we arrived into the terrific Harbor Springs city marina, our family appeared. Watching the kids’ expressions upon seeing family was so enjoyable. Family is so central to our lives. That’s in part why we decided to set-off on this journey now, with the kids at this age. Visiting with family (and friends too) along the way, and sharing some of our adventure, has made the journey even more special for each of us onboard.

The kids had a rip-roaring time together – running around, swimming, paddle-boarding, playing games late into the night and just…being kids. Jennifer and I also had a great time with all the kids and their mamas, laughing and catching-up on the latest goings-on back home. We’re lucky to have family willing to travel 1,500 miles, on less than a week’s notice, to visit us aboard Muddy Waters for two days. Thanks Jaleh, Micah, Kristi, Kathryn and Alex!

Harbor Springs is also home to scores of spectacular classic wooden boats, meticulously maintained by caring owners and ace shipwrights. In our August photo album you’ll see a beautiful 1941 Chris-Craft that was for sale just a handful of slips down from Muddy Waters. The kids said they’d pool their money to buy it if we could tow it back to Miami behind Muddy Waters. She is indeed a beauty, but I’m not sure we could have acquired this impeccably maintained antique boat for the sum total of $78. I guess I never asked though, so you never know. As the saying goes, you can’t complain about not winning the lottery if you don’t even buy a ticket…

Speaking of classic boats, the kids have been taking photos of just about every Hinckley Yacht we’ve seen, starting in Palm Beach, Florida where, no surprise, there is a large concentration of them. The kids love these classic, Maine-built (no surprise again!) beauties. Keenan wandered into the Hinckley office in Harbor Springs to pick-up a brochure for his collection, and we struck up a conversation with the knowledgeable area manager Marty. Next thing you know, Keenan, Daria and I are zooming around Little Traverse Bay in a Hinckley T29r. Thank you Marty! If Daria’s jewelry or dance career and Keenan’s music or photography career take off, you’ll have two new customers. Jennifer caught herself saying about the boat, “Doesn’t she have beautiful lines?” She looked at me, laughed and said, “Now I know why people say silly things like that about a boat. It’s true, the lines really are something!”

While in Harbor Springs, we also got to know our neighbors, the Millers, aboard the beautiful Hatteras 50-footer called…what else, Miller Time. In addition to great company and conversation, they also shared helpful local knowledge on places to visit down the eastern side of Lake Michigan. And in a very kind gesture, they offered us their car for two days so we could travel to Petoskey, about ten miles from Harbor Springs and around Little Traverse Bay. Thank you Millers!

In Petoskey, we enjoyed a fun-filled festival on the bay. Keenan and I also got to listen to a band we’d heard play a few days earlier on a street corner in Harbor Springs. None other than the, um, Galactic Sherpas. Not a household name, but we enjoyed the driving jazz funk groove from this collection of talented musicians. Jennifer and Daria checked-out the cool crafts of local artists on display and then we all wandered over to the Chalk & Chocolate sidewalk art event benefitting the local arts center. We saw lots of talented artists all around and hope the kids got an infusion of arts energy too. We think they did.

With weather, visitors, new friends, and all there was to do in Harbor Springs (beautiful hikes, runs, even a round of golf for the captain and chief engineer), we ended up staying a full week. The crew voted Harbor Springs as one of their favorite small towns on the trip so far. Five stops into Michigan – Drummond, Mackinaw City, Mackinac Island, Harbor Springs and Petoskey – and we see why locals say cruising on Lake Michigan is one of America’s best-kept boating secrets.

A few locals even told us to be careful and not to say too much about it on our blog, lest we attract too many new boaters. We laughed and told them our readership is quite limited in size so not to worry. We’re only at the top of the mitten and look forward to moseying down the eastern side of Lake Michigan toward Chicago.