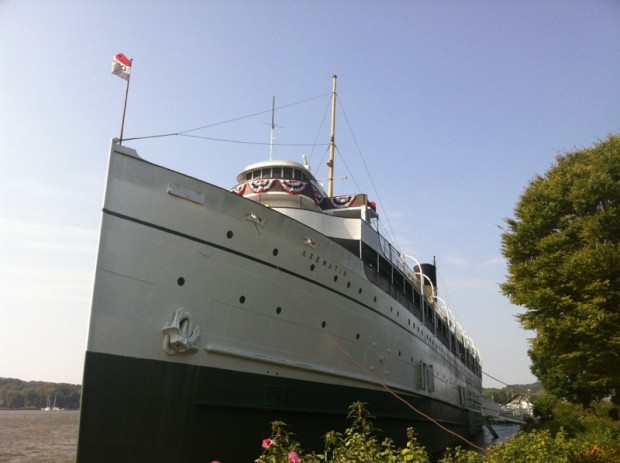 The SS Keewatin, a former Great Lakes passenger vessel built in Scotland in 1907. Today the Keewatin finds its home in the Saugatuck/Douglas area in Michigan and is a privately-run museum and library offering historic tours guaranteed to bring you back to Titanic-era time and place.

Just a few more stops to go along Michigan’s western shore before we scoot across to Illinois. Next port of call for Muddy Waters and crew is the town of Manistee once a thriving logging town. The signs of its more prosperous past were evident in the turn of the century architecture of the main street storefronts, though decades of economic decline have taken their toll here. Manistee seems in the earliest stages of a revival, with a cool coffee shop and adventure sports store and plans to restore the historic theater.

We only stuck around a day and then made for Grand Haven, one of the busiest tourist ports this part of the lake. We tied-up at the city marina and soon found we were rolling side-to-side thanks to a quiet and constant surge created by an east-west inlet and a westerly wind. Dinner was like a scene from Popeye. Half the crew on one side of the vessel eating when the table rolled to port and the rest of the crew stuck forks into the spinach when Muddy rocked back to starboard. We decided to stay through the evening, notwithstanding the surge, since we had a back porch view of the musical fountain light show. Maybe kinda’ of corny but well put together, nicely attended by lots of summer tourists and good fun.

During the wee hours, with the perpendicular surge increasing in intensity, we found ourselves lassoing pilings with additional lines and rearranging all our fenders to stop from whacking Muddy’s teak cap rail and stainless steel upper rails into the dock. Boaters beware, if there’s a westerly of more than just a few knots, you’ll feel it right good in Grand Haven. By morning, we’d made arrangements to move across the channel to North Shore Marina, a protected spot and family friendly marina.

Before departing the city marina the next day for our half mile journey we saw the Parrent family, another family with kids we’d met doing the Great Loop. The Parrents recently finished the Loop and returned to their starting point and home port in Michigan. When we saw them in Grand Haven, they’d just purchased a home after living aboard their boat for nearly two years with their three kids. We first met the Parrents in Marathon in the Florida Keys, though we were on our way south to the Exumas and they were moving north up the east coast. Even though we had only a short visit, and the kids a brief run around the park with the Parrent children and their new doggie (named Watch Out!), it was great see the Parrents again and hear more about their own adventures. We wished we’d seen them more along the way and hope to keep in touch.

Once across the Grand Haven channel and snugged-up in the more protected harbor, we met-up with Jeff and Susie Parker again, this time aboard their beautifully appointed Krogen 48’ Idyll Time. The Parkers told us all about the north side of Grand Haven, and we spent the next two days waiting out big winds while hiking in the beautiful parklands and dunes along the coast to the north in Ferrysburg. Great hikes in the hills and woods and also along the beach. We also got to watch and film the Grand Haven inlet in 20+ knot westerlies and watch a few fisherman brave the funneled ten-foot swells and make their way into the open lake.

When the weather broke, we ran south to Pentwater, a nicely protected natural harbor, and made our way into the aptly named Snug Harbor Marina. This family-run marina is expertly managed and kept clean as a whistle. And it’s nestled into a little alcove of water, providing great weather protection. We barbequed one evening, went tubing on Mudcat another day, and then borrowed the marina owner’s mini-van for a tour of the area.

With the freedom of four wheels, we traveled north to the town of Luddington, and Jennifer and Daria found a farmer’s market and a groovy coffee shop that served things like flax seed and homemade hemp milk lattes. They could probably cure diseases with the fancy and healthy drinks they make there. And if nothing else – like a number of other good-eats places we’ve found – it promised to keep the Muddy Waters crews’ systems running smooth. Ifyaknowwhaddamean.

While the girls were exploring, Keenan and I met the owners of and a terrific family run Great Lakes photo studio and listened to some stories about the Lake and how this father and son captured so many stunning photos on the water. I think Keenan, our budding photographer, was further inspired. Thanks to John Gear, a Michigan native and president of Kadey-Krogen Yachts, for suggesting we stop in.

We also traveled south by car to Silver Lake State Park for some high-octane dune buggy riding. Weasie was our driver and guide and she was a hoot. Dale Earnhardt, Jr. steering and acceleration skills, an encyclopedic knowledge of the park and funny as could be. First we had to keep our heads down thanks to the self-generated sand storm, and then a clap of thunder and we were keeping our heads down as we got pelted with hail. It was a roller coaster ride in the elements, like the terrestrial version of a passage through a storm. And we loved it, especially listening to the kids’ laughter.

Although we decided to dune with a commercial outfit, the park distributes passes to folks who want to ride the sand mountains in their own vehicles. As we approached the park, we saw a line of nearly 500 suped-up cars and trucks with drivers waiting to get their passes with the allotted dune times. Though it’s hard to say anything’s wholly Made is USA these days, of the 500 cars in line, 499 were American brands. No joke, we saw one non-American brand – a Toyota Prius whose driver must have thought it was the line for Starbucks! This is Michigan after all and home of Detroit, the Motor City.

Next we chugged Muddy Waters south to the lovely town of Saugatuck, finding a slip at the Singapore Yacht Club. Saugatuck is home to scores of art galleries, artisan studios, cafes, coffee shops and just lots of charming small businesses. We also took our bikes across the harbor to the town of Douglas and enjoyed stepping back in time in another town with a quaint and historic main street.

We later hiked up Mt. Baldhead and then walked the dunes and beaches just south of Saugatuck. All part of the kids daily P.E. requirement. Jennifer even competed in the Mt. Baldhead Challenge, a 15k trail run, one fine Sunday morning. The kids and I rode our bikes to town and caught our champ crossing the finishing line with her family-famous huge smile. Remember, she’s preparing for a week-long adventure race in Costa Rica come January. Gotta’ get in the miles.

The kids did a lot of biking and while on a jog I found a nice golf course tucked in the hills. Keenan and I returned and he ate up the course with his game while I lessened Muddy Waters’ ballast by leaving behind maybe a dozen golf balls. A few of the senior players said to me Keenan has as classic a swing as they’ve seen. He really does. One told me I swing the club like it’s a baseball bat. Hey, at least he named a sport!

As part of the kids’ ongoing homeschooling field trips, we took them aboard the SS Keewatin, a coal-powered Great Lakes steam ship built in 1907. We spent two hours aboard, visiting every nook and cranny, from boiler room to wheel house. This Titanic-era vessel brought us back to a time of classic and elegant high-end travel (for the rich only of course) and pre-World War I possibility.

As the knowledgeable guide brought history to life for us, the kids looked-on in amazement at the once luxurious staterooms, barber shop, captain’s quarters and also super-sized versions of equipment we have right here on Muddy Waters. One 3/8 chain-link for our main anchor probably weighs half a pound. One chain link for the Keewatin’s two massive anchors weighs-in at an impressive 40 lbs. Hope the windlass worked well and the crew didn’t have to raise the hook by hand.

A highlight of our stay in Saugatuck was as visit from our cousins Richard and Kristi and their kids Kathryn and Alexander. Lucky us, they visited us in Harbor Springs and then Saugatuck. Not surprisingly, two of our favorite stops along the way. The kids had a ball running around the town and parks with their cousins, and we loved being with family and sharing stories and laughs from travels and past visits and holidays together.

We were also lucky to bump into our friends the Parkers again in Saugatuck. We learned more about their expeditions to Kilimanjaro and Everest and listened enviously as they told us about their scheduled trip with a scientific group (and another Krogen-owning couple, the Tucks) to Antarctica. Cool in so many ways.

We had a wonderful month along Michigan’s sunset coast, and we see again why people so love the boating here. The last step for us in our Michigan adventure was to watch the weather carefully so we could make the 90-mile open-water Lake Michigan crossing from the tiny artisan town of Saugatuck to shiny metropolis of Chicago.