Home Pappy crews along the coast

Pappy crews along the coast 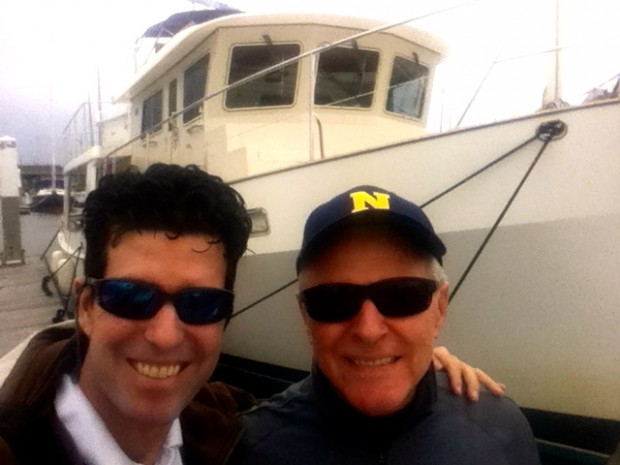 On May 3rd, our eldest son, Michael, embarked on a six-week odyssey, driving his 48′ trawler Muddy Waters mostly alone from Miami up the Intracoastal Waterway to Norfolk, Virginia, then through the Chesapeake Bay region to New York, where he’ll be joined by his family to explore coastal New England on their way to the Penobscot Bay in Maine.

I flew to Jacksonville, Florida on Tuesday, May 8th primarily to offer him companionship for a week – I certainly wasn’t much help doing boat things!  I took a taxi from the airport to Fernandina Beach, Florida a charming little village on the north part of Amelia Island close to the St. Mary’s River and the Georgia border. 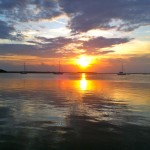 We docked at the Fernandina city marina two nights.  Highlights included: eating pizza under a huge umbrella in a sudden downpour and wind storm that sent everyone else inside; having a beer on a lounge porch listening to two guitarists singing folk songs; going to a rustic hardware store that had enough inventory (“if a special-type lawn mower is ordered, we’ll buy a second one to have….”) to supply a large city; strolling past old and picturesque houses – one of which had an annex that looked crooked to the eye; visiting a museum that showed the building of the first railroad linking the Florida east coast with a Panhandle port in the late 1800’s; stopping for homemade fudge and ice cream. 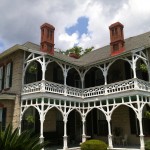 On Thursday, May 10th, Michael drove nearly twelve hours through coastal marshes in Georgia to Kilkenny Creek, just south of Savannah, where I helped him anchor.  On his hand signals from the bow I’d move the engine into forward, neutral or reverse and the bow thruster left or right – moves that he’d make when alone by walking quickly from the anchor apparatus to the pilothouse and back.  We enjoyed a beautiful sunset while eating the final of three daily meals he’d prepare, plus a cold beer. 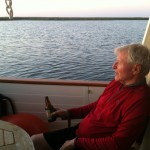 Our next stop was an anchorage on the Beaufort River across from this pretty antebellum South Carolina town, followed the next evening by an anchorage on the Stono River just south of Charleston.  Over these few days we saw several dolphins, including a few racing next to Muddy Waters’ bow; horseflies galore; long stretches where we saw no one, then areas with different-sized pleasure, cruise and fishing boats passing, including a few humongous barges (every single vessel got a wave outside our cabin from Michael).

We, and a number of nearby boaters, enjoyed an amusing radio exchange between a sailboat skipper and bridge tender.  The skipper would repeatedly call for the bridge tender who would then answer, but the skipper didn’t have her volume up and couldn’t hear the bridge tender’s replies; the skipper then called a marina to test her radio, but the same thing happened.  Finally, she realized everything was working just that her volume was too low.  She spoke to the bridge tender, who raised the spans, and the sailboat was able to pass through.  Once we left the Georgia marshlands we passed several interesting South Carolina towns or coastal settlements, including Parris Island, famous as a U.S. Marines training center.

How did we spend our time on Muddy Waters?  I did a lot of reading, sitting in the wheelhouse just looking from side to side, sometimes standing out on the fore-deck.  A memorable time was when we were crossing a sound that was open to the ocean and pretty choppy, and I worked my way carefully to the bow pulpit and then just stood there like (an imperceptibly less graceful) Kate Hudson on the Titantic. 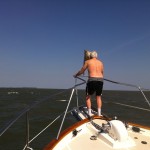 Michael would stand at the wheel for long periods, always watching, checking instruments, charts, the weather, winds, tides, currents, depths, etc.  A couple of times I took the wheel, but I had a hard time staying near the line on the monitor or magenta line on the charts that divides the ICW between the red and green channel markers.

We both exercised each morning, and Michael did long runs in Fernandina and Charleston.  We ate well (thanks Jen, Homa and Sima for preparing so much delicious food!).  At night he strummed his guitar, played blues music or did some writing while I listened to either Norah Jone or to a piano composition playlist on my new iPhone.  I slept pretty well in Keenan’s lower bunk.  Michael would fall asleep almost immediately when it got dark – a book on his stomach and the light on.

We arrived at the Ashley Marina in Charleston, South Carolina the morning of Sunday, May 13th (Mother’s Day).  Michael and Jennifer’s friends, Brooke and Dee Williams who live aboard their trawler East Passage, kindly lent us their slip since they were traveling in Florida.  I had an easy assignment – hand or toss the coiled-up line in the stern to the marina dockhand.  Guess what?  Muddy Waters stuck out beyond the end of the slip, and a strong wind started pushing the stern away from the dock.  I hurled the coiled line to the dockhand, but it plopped in the water.  I had neglected to save a modest length to extend the distance to the dock.  Michael saw what happened and looked like Dwayne Wade as he leaped over the three steps leading from midship to my level, grabbed the line I had started to pull in, retrieved it quickly then threw it expertly to the dockhand.

Afterward, he told me that in a few more seconds we could have bumped the boat next to us and it was a good thing no one was on it.  About 15 minutes later we saw the owner come up sleepily from his cabin, but he never looked our way…  And I think the dockhand felt my embarrassment, because he never made eye contact, even after everything was cleated.

What an interesting city!  Our taxi driver gave us a mini-tour, passing the beautiful colonial period houses on the harbor front (the Battery), through downtown, and dropped us off at the former slave trade market, which is now an open-air crafts market.  We then strolled around, passed the stately Customs House, visited a neat art studio, looked into the Exchange and Provost building (earlier a dungeon) where George Washington had dined and where the U.S. Constitution was ratified by South Carolina, walked to the waterfront and saw Ft. Sumter in the distance, plus the WWII aircraft carrier the USS Yorktown, then read the inscriptions on four marble blocks outlining the history of Charleston from the 1600’s to the present.  The bronze placards, the ones we saw anyway, didn’t seem to mention the slave trade or cover much of the Civil War. 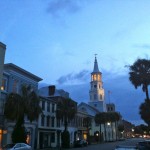 That afternoon, we sat at a bar nursing just one beer each for three whole hours while we watched the Heat-Pacers playoff game; the bartender would ask us if we needed anything about every 20 minutes.  Afterward, we both had delicious meals at an old restaurant, sitting at a family-style shared table.  On our table Michael found an old picture book of Charleston history which included a chapter entitled “After the Recent Unpleasantness.”  As it was getting dark we strolled up another historic street to a beautiful park with numerous Confederate monuments, then to St. Michael’s Church which replaced one built in the 1680’s, then took a taxi back to the marina.

Monday, May 14th was my last day onboard, and I told Michael he’d have to somehow venture forth without me.  At noon I packed, walked with him along the marina’s lengthy dock, said goodbye, took a taxi to the airport, then flew back home to Miami.

Did we have a good time?  You betcha!  Since we were onboard over Mother’s Day, I’d said to Mike: “Help me think of a nice Mother’s Day gift for Mom, maybe we should look online.”

Mike replied: “Dad, you already got Mom a great gift.”

He cleared things up: “Yes you have Dad, you came here for a week.”