Home To the Keys and Beyond

To the Keys and Beyond 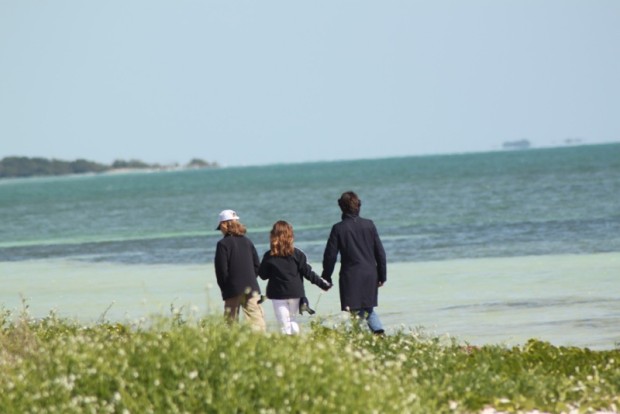 Here’s a shot of Jennifer, Keenan, and Daria on the beach at Bahia Honda State Park just after the Seven-Mile Bridge in the Keys.  It was a beautifully cool day with a Mare’s Tail high in the sky, a somewhat rare sight in Florida (I think so anyway) and typically meaning the jet stream was a blowin’ extra hard.

Please pardon the posting pause.  So much to do and see and soak-up, and we want to share that with family and friends.  When we last wrote, we were busy watering the local wildlife.  (See Jennifer’s helpful message on that, and please don’t do as we do.)

Well, the Florida Keys have come and gone for us for now.  We thoroughly enjoyed the shake-down cruising and learned a boat load, in every way.  The people, places, and pace are so soothing and settling.  A pink sunset in the Keys, especially with a distant storm on the Gulf of Mexico, is like none other.  We’ve watched just about every sunset together from the aft cockpit (since the prevailing winds usually keep our bow facing east).  Keenan captured a few sunset still-shots.

Besides being a fisherman’s paradise and place to lose yourself in the natural beauty of the shallow waters and abundant sea life, the Keys is also a place for adventuresome types of all sorts – especially the illustriously illicit from the time of the pirates and Spanish galleons to the turtle meat trade to the local citizens’ declaration of an independentConch Republic in 1982.

We also heard and read lots about Henry Flagler, John D. Rockefeller’s partner in Standard Oil, whose vision for linking Key West and the rest of the U.S. east coast (by way of the Florida East Coast Railway) helped create the modern-day Florida Keys.  Though the railroad itself was largely destroyed in a devastating 1935 hurricane, Flagler’s indelible imprint on Florida’s history is among our state’s most important.

Jennifer and I read Les Standiford’s Last Train to Paradise: Henry Flagler and the Spectacular Rise and Fall of the Railroad that Crossed an Ocean, and we bought the young reader’s edition for the kids as part of their home-schooling lesson (coupled with a visit to the Historical Museum of South Florida, in Miami).  Should be mandatory for all Florida school kids.

We also enjoyed a short but lovely visit from from family while in Marathon and traveled together to Bahia Honda State Park and saw the still-robust remnants of the Flagler railroad and a stunningly beautiful island through which this section of the railroad once crossed.  We have a few photos in the January album.  The turn-of-the-century engineering genius is still on display.

As we climbed over and up toward Key Biscayne, we anchored in the lee of Rodriguez Key (with WSW winds).  Rodriguez Key is just on the inside edge of John Pennekamp Coral Reef State Park, America’s first undersea state park.  I donned a shorty wetsuit from triathlon days (streeeetch) and dove (word mavens may prefer dived, whatevah…) the anchor to be sure it was set.  We want to cross the Gulf Stream; but, we want the pointy end of the boat to be out front and that big fan blade under the boat to be spinning.  Jennifer and the kids swam and paddle-boarded around just before sunset as a fleet of sailboats joined us in the anchorage.  This is a special place for me too because I got my PADI open-water scuba license here for my thirteenth birthday…some thirty years back.

We departed Rodriguez and headed east and north toward the Miami area in Hawk Channel to stage for our trip across the big bad Gulf Stream.  We had a brief but wonderful visit with family and friends around Miami, stocked-up on all sorts of organic stuff and organized our paperwork with U.S. Customs and Border Control for our eventual return stateside.

We’re going to rendezvous with another couple (Dennis and Julie Fox, former owners of this very boat!) to cross to Cat Cay.  More soon about the Foxes, who’ve so kindly taken us under their wing.

We’ll likely bee line to the Gulf Stream from Fowey Rock lighthouse.  Our plan is to leave in the dark in the early morning (with a keen eye on our Furuno radar) and make it to Cat Cay south of Bimini in the afternoon to clear customs.  We’ll then travel nearly 70 nm to the Berry Islands the following day, and if the weather holds then onward (south and east) to the top of the Exumas.  Here’s a good article we recently saw on boating to and in the Bahamas, with a nice few paragraphs on crossing the Gulf Stream.

Time to check the oil, other fluids, and belts down below in the engine room.  We’ll also sit down and look at the charts together and generally discuss our game plan for tomorrow.  We may have limited internet access for a bit while we wend our way down to the Exumas in the southern Bahamas, but we promise to post more regularly once we find a little anchorage where we can manage a connection to the ol’ interwebs.