Home Up the Exumas and then to Eleuthera

Up the Exumas and then to Eleuthera 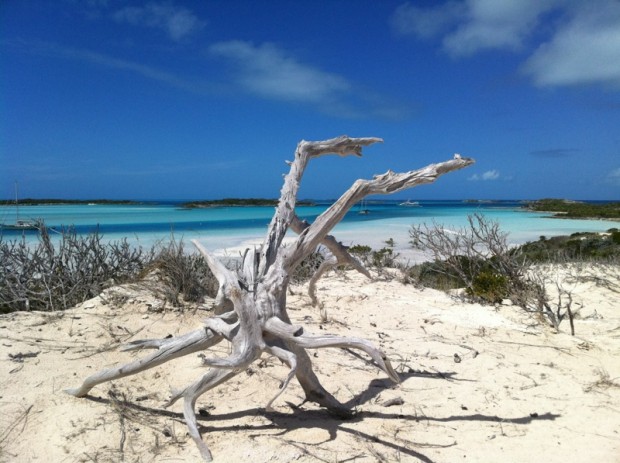 This is the view from a hill near our anchorage in the Exuma Land & Sea Park, run by the Bahamas National Trust (of which we’re now members).

Though our hook seemed stuck pretty good in the sand off Stocking Island in the southern Exumas, we managed to weigh anchor on March 1st and begin our journey northward. Our first move in a bit and another adventure-filled week in the ship’s log.

After departing Elizabeth Harbour, we thought we’d pass through Adderly Cut and visit the marine science station at Lee Stocking Island, but since that would’ve required re-entering the Exuma Sound the following day in heavier seas, the crew convinced the captain to press on toward Rudder Cut to get on the Exuma banks (the leeward side of the Exumas), where we hoped to cruise for a week.

You’ve heard us talk about cuts a few times, so what exactly is a cut? Our layman’s definition: the narrow space or path between two reefs, rocks, islands, or land masses through which zillions (a technical term aboard Muddy Waters) of gallons of water pass back and forth based on the tides (which in turn is based mostly on the moon and sun’s gravity). Sort of like when you squeeze a garden hose and increase the pressure and cause the water to accelerate.

Passing through a cut can seem like whitewater rafting in class V rapids. We’re doing it in an 80,000+ lbs. vessel that feels like a tiny cork in the mighty river of a cut. If a significant wind happens to oppose the current in the cut, then danger abounds in what’s sometimes called a rage sea. You might easily see five or eight foot waves with very short periods between them and seemingly coming from multiple directions. Like whack-a-mole with waves. Needless to say, we try to pick deep and wide cuts at ebb tide or slack tide (because there’s less movement), with very little opposing wind.

Anyway, after entering a wide, deep, and calm cut, we cruised up the banks at low tide (stirring up a little sand once or twice). We eventually arrived at Black Point Settlement off Great Guana Cay (cay is pronounced like key), some sixty miles from Georgetown, anchored in ten feet of crystal clear water, and took the dinghy to the town dock. Black Point is a fishing village of about three hundred people. We saw lots of school kids on bikes, visited a few shops looking for fresh produce, and wandered over to the ocean side of the island to view a blow hole in fine form.

While anchored off Black Point, we also met a friendly Canadian couple on a Krogen trawler (called Sylken Sea) and learned lots about the Canadian portion of the Great Loop from them. (We learn lots from everyone we meet, and we’ve especially enjoyed getting to know other Krogen owners. First among equals of course are Dennis and Julie Fox aboard Sea Fox. We’ve also cruised with Mark and Emily aboard Grand Adventure and Bob and Nancy aboard Puffin – both are delightful couples, funny and adventurous.)

We departed Black Point the next morning and headed up the island chain. While on the way, we thought we’d give a call on the VHF radio to our new friends Linda and Lawrence Reeve on their Krogen trawler Far Reaches. Another terrific couple who’ve been very kind and given us great advice on so many things about boats and the Bahamas. We weren’t sure precisely where the Reeves might be but suspected they’d be in the neighborhood.

Turns out they weren’t far, anchored off Cambridge Cay. Lawrence and Linda (who’ve been sailing in the Bahamas for nearly 40 years) suggested we alter course and head for Cambridge too. We turned a few degrees to starboard and were at the tricky entrance to the anchorage within an hour. With a little luck (ours) and skill (not ours), we soon had Lawrence helping pilot us in through a magnificent collection of coral heads and sand bars.

The Reeves then guided us, in our dinghy, out to the mouth of a nearby cut (with five foot waves) where we zipped up our wet suits and jumped in for the Daytona 500 of dives. A high speed drift dive through an ocean cut. We seemed to move at a sprinter’s pace, each of us holding lines we’d rigged from our dinghies. In a flash, we saw lots of sea life, including conchs, a loggerhead turtle, huge grouper, and colorful coral. Thank you Reeves!

The next 72 hours brought steady 20-25 knots winds (with gusts to 30+ knots), so after home-schooling each day, we dinghied to shore and hiked the rugged terrain and watched a ferocious ocean full of growlers beat down on the coast line with crashing seas. While staying out of the water during the weather, we also got to know the volunteer wardens and harbor hosts aboard Down Time (Roger and Connie) and a kind cruising couple (Garland and Jean) aboard Arcadia. We learn so much from other sailors, and we’ve made so many new friends we hope to see again on the water.

We then made our way north just a few miles to Warderick Wells (see our earlier post on the Exuma Land & Sea Park) and spent two days hiking, kayaking, and snorkeling our way through the beautiful park. Daria and Jennifer combined snorkeling and exercise by diving a reef near a cut with a flood tide.

As always, we watched the weather carefully (listening to the local forecast on VHF and then focusing on Chris Parker’s reports) and decided after assessing the forecasts that we’d travel from the Exumas to Eleuthera today while the winds and seas were calm. The same sea that was a washing machine of turbulence, was as kind and calm today as it was angry and violent just two days earlier. We had a smooth ocean passage, with glass-like conditions and nary a ripple on the mile-deep waters, arriving in Rock Sound early this afternoon.

Tomorrow we’ll weigh anchor at day break and head for Governor’s Harbour, further up the island of Eleuthera. We’ll provision, home school, do some mechanical checks, ask locals about what to see, hike around, check the weather. And check the weather. Again. Then it’s back onboard for reading, music, and maybe a board game or two. If you’ve been following Jennifer’s food blog (and you should), then you know we’re a well-fueled crew. The first week of March has been a busy one, in such a good way.